In 2015, a small study purported to show that teaching elementary school students philosophy improved their math and reading skills. The following year, the Education Endowment Foundation (EEF) funded a large-scale study of the effects of teaching philosophy to young children. The results of that study have now been announced.

The study looked at 3,601 students across 198 schools in the United Kingdom, a portion of whom were exposed to the Philosophy for Children (P4C) curriculum, “an approach to teaching and learning, in which children take part in philosophical enquiry.” The curriculm “aims to enhance thinking and communication skills, boost confidence, self-esteem and improve behaviour” and to “help children become more thoughtful, reflective and reasonable individuals.”

The point of the study was “to measure the impact of P4C… on reading for pupils eligible for Free School Meals (FSM), on reading and maths for all pupils, and on pupils’ social and communication [“character-related”] skills.”

Here are the results:

On that last point, the researchers add that “this may be due to the fact that single items may not be suitable for capturing complex character and metacognitive outcomes.”

Oh well. At least the study found that there were no “negative effects on pupil outcomes” from taking part in P4C. Was there evidence of any program benefits? One: “teachers who took part in P4C reported feeling that the programme had a positive impact on pupils’ social, thinking and communication skills, and found it particularly helpful for children who were less self-confident.”

The following graph shows the extent to which teachers agreed that the P4C program had various positive effects on their students: 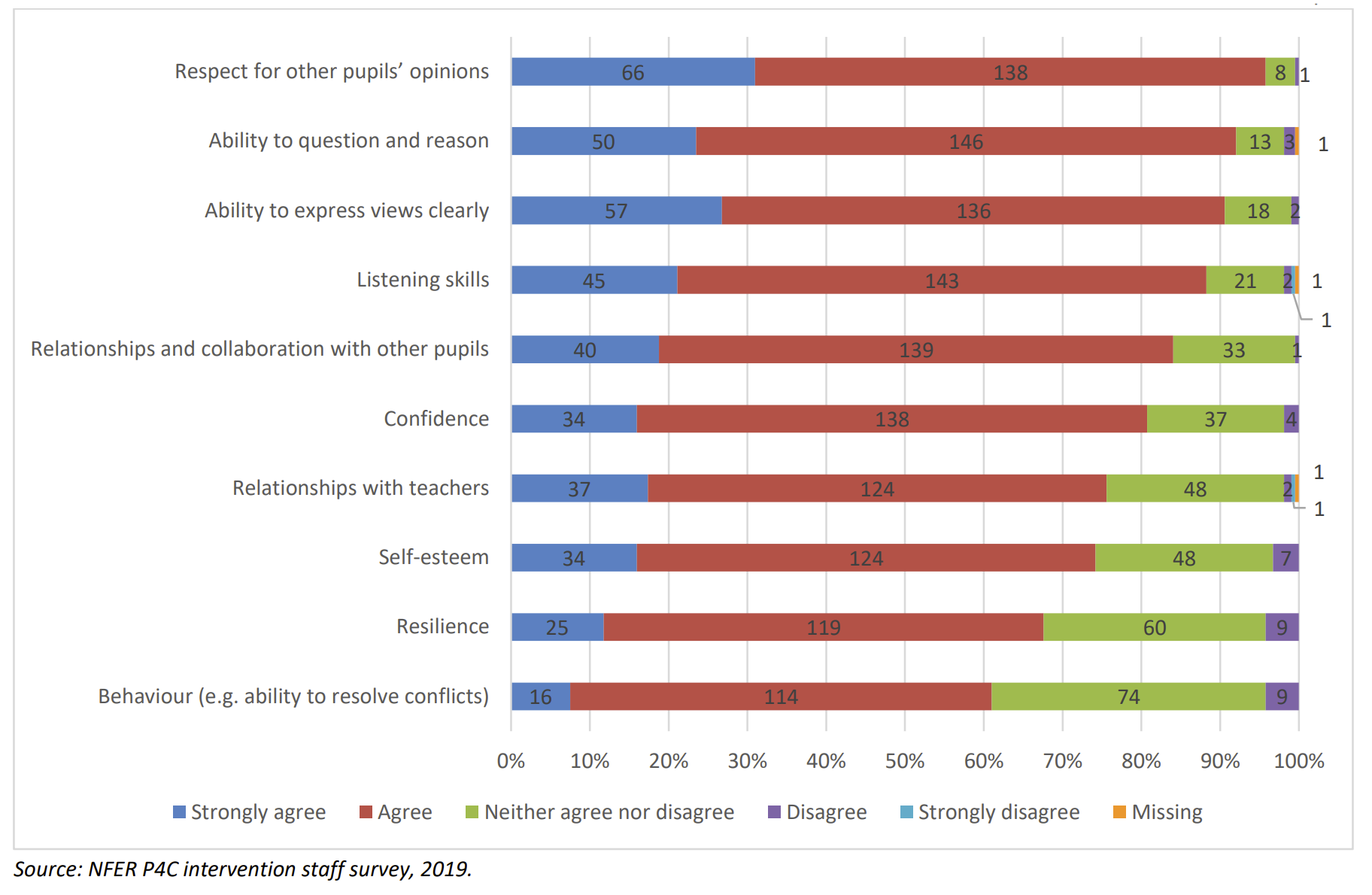 Given this positive evidence, the researchers say, “there may still be a benefit in evaluating the effects of P4C on non-cognitive outcomes, perhaps using other measures that capture the complexity of changes in character and metacognitive skills.”

However, the EEF has no plans at this time to fund more research on the matter.

The study is available here. The Guardian reports on it here.

Related: More study of and data about the possible benefits of pre-college philosophy education is needed. A longitudinal study of students who take place in a P4C summer camp was launched just a couple of years ago. One guest author, Myfanwy J. Williams, notes that P4C methods are not the only way to do philosophy with children. A 2010 report says that the P4C curriculum may “help build resilience to extremism among young people.” One method of teaching critical thinking skills—argument mapping—has some empirical support.

Seems relevant that this study was done with 9-11 year olds. In my experience teaching philosophy to 10-12 year old kids, the math and reading aspects of philosophy just aren’t present. I could force them to try natural deduction or intense reading, but they benefit more from discussion and hands-on activities. I don’t know the P4C curriculum, but I can say that if it’s well suited for 9-11 year olds then it probably doesn’t have much that would improve math or reading skills right away.Report

Increased mathematical aptitude is great, but the main reason I want more people exposed to philosophy, and particularly critical thinking, is so the next QAnon doesn’t happen, and there’s no repeat of January 6.Report

While I would consider the former more of a neocon movement than anything, Far-right politics would be a result of more critical thinking, at least in terms of critique in the philisophical sense and not the sociological, Frankfurt sense.

Unless you want only the “right” type of critical thinking, of course. Critical thought is all well and good until it challenges YOUR worldview, eh?Report

I find it hard to believe that more critical thinking would lead to increased skepticism of the reality of climate change, or an increased tendency to think differences in outcomes for members of different racial groups have substantial and genetic bases, or greater confidence that supply-side economic policies benefit the median worker. So I don’t know what you’re taking about.Report

I don’t know what Sam H is talking about, but I do worry from time to time that a little critical thinking could be a bad thing. For instance, I sometimes see students learn about appeals to authority and ad hominem fallacies and conflate that with thinking that expertise doesn’t matter, or seriously entertain stupid ideas in a spirt of open inquiry. I think it is not at all obvious from the armchair what effects further exposure to critical thinking or philosophy would have on susceptibility to conspiracy thinking–it wouldn’t totally surprise me if it backfired.Report

This is a good concern. It’s also not new actually. Immanuel Kant wrote about the same concern in his essay “What is Enlightenment?” For Kant, even if systematic “enlightenment” or critical thinking (let’s call it) occurred within and between the masses, there is no guarantee that people will genuinely maintain true enlightenment or prevent us from reverting.

For Kant, given our human nature for comfort and adaption, it’s very easy for us to slip into forgetfulness and laziness. His essay is a bit pessimistic. But it’s still a good piece for people to read. It’s so much easier to read compared to his other works and I think it would be a good supplementation to a critical thinking class from a canonical and historical perspective.

Elsewhere, however, Kant understood the importance of self-critique in reasoning such as in his Critique of Pure Reason. Indeed, being rational may necessarily require self-critique.

Many philosophers of education also stressed the importance of both impartiality and self-critique as essential components to critical thinking. Critical thinking in this sense is more akin to what judges do in their daily careers. Not all judges are reasonable of course. Nevertheless, most of their common law judgments are based on such procedures.

Here in the States, when my boys were in grade school – a parochial Roman Catholic school – a note was sent to the families asking what “gifts” they had that they might be able to contribute to the school.
I wrote back and told them about a “philosophy for children” movement. Truth is, one of the biggest reasons that I sent my boys to a Catholic school was I wanted them to develop a philosophical/ spiritual perspective on life. I always felt that I did because I went to a Catholic School. (Confirmation name is “Thomas”, after Thomas Aquinas, patron saint of philosophers.)
So they used my “gifts”, only not for teaching the kids philosophy. I got to worsh (sic) pots and pans at bingo while old alpha-femme Flo cooked and bossed everyone around.Report

Has been pointed out before in previous posts on DN but people often only hear the positive results without the criticisms. Initial study likely wasn’t properly randomised, and there are some worries with how they calculated significance.

Although a small-scale study used by TPF to help improve and understand their practice, it did seem to show that philosophical enquiry – both with and without the explicit teaching of metacognitive skills – improves pupils abilities to think metacognitively. It also shows that the explicit teaching of MC skills improves the use and successful use of MC skills – by 30% in this case.

You can read the full research report here: https://www.e-publicacoes.uerj.br/index.php/childhood/article/view/46229Report

Both my daughters, aged 5 and 9, have P4C lessons at their school (state school in London).

Examples of things they have discussed recently: 9yo, is it a choice to be British? Is it ever right to lie?; 5yo, why should you be kind? [Something about jealousy when giving presents, her explanation a little hazy]

So ethics and a little civics… They both enjoy the classes, and with the older one I have had interesting conversations about her opinions as a result (although she shows disappointing inclination to utilitarianism!)

I’m thoroughly supportive and think it’s a useful part of their curriculum.

I’m not sure why anyone thought it was a useful idea to spend public money studying whether it improves kids’ maths… why on Earth would it?Report

Why is her inclination to utilitarianism disappointing?Report

Well, I wasn’t being *entirely* serious with that part of my comment! Utilitarianism is kind of the most blah way of thinking about ethics though 😉Report

I have been teaching for almost 30 years and introducing children of all ages to philosophy is a huge benefit. It allows them to think about the “why” and “how” theories develop. It then also allows them to use their own questions to define the importance and relevance of other topics. I also believe that it helps in conflict resolution and effective communication.Report

Only slightly related, but there is a set of philosophy books for kids, reviewed by a kid and his father, who I think is a philosopher, in the current issue of Philosophy Now. They seem to disagree about the merits of the book: https://philosophynow.org/issues/142/Philosophy_Friends_by_Francisco_Mejia_UribeReport

I think people aren’t focusing on the important part of this study,

“This study found no evidence that P4C has a positive or negative impact on reading attainment for FSM eligible pupils, nor on reading and maths attainment for the entire cohort. This suggests that class time can be directed towards this activity without reducing reading or maths outcomes.”

A couple of things I’d be curious about–what materials were they using, how many students were in the class, how many times a week did they meet and for how long, what was the training for the teachers? I don’t see this information on the EEF site. The information would be significant to have for comparative reasons since there have been so many other studies that do indicate an increase in math and reading–for US students.

The BBC documentary, A Teacher’s Story, that was done on the P4C program at Montclair indicates this as do the studies they have done on the increase in critical reasoning skills as measured on the NJTR.

There was also this study done at Sam Houston State, and they did a follow up several years later–not only were the scores steady but had actually increased as compared to the control group: https://www.researchgate.net/publication/288833216_Socrates_in_the_schools_Gains_at_three-year_follow-up

I also suggest this article:
See this article for an analysis of myriad P4C programs and studies: https://journal.viterbo.edu/index.php/atpp/article/view/1160Report

To echo Claire Katz’s comment (gig ’em!), it’s important to keep the bigger picture in view, both in terms of the studies that have been done and their signficance for the profession. Both in Europe and in the U.S., a number of studies have reported social and cognitive improvements correlated with pre-college philosophical instruction. This strikes me as a potential area of growth for the profession, particularly in the U.S., where there is currently very little instruction of this sort.

In seriousness, I don't think I'm particularly unusual in saying things like that (and Mark van Roojen's testimony supports this). Lots of people have a

Occurs to me that this is all fodder evidence for the old debate about privileged access. It did extend my mind on this.

I think that would be good too.

Could be but I don't have a hypothesis as to why. And I do think that before anonymity fancy people had an undeserved leg up. […]

Sure, all good points, but it sounds like variations on the standard publishing model. I'd like to see new models.

That's an excellent question. Our problem is we don't know what our goals are here or how we would measure success in meeting them.

Daily Nous readers are encouraged to look at the discussion of the case on my Facebook page. (It is a public post.) Some readers have […]

What form would this hypothetical evidence take?

Other people are almost as wonderful as I am.

FWIW, I think that too many of us suppose that all journals work the same way, and also that one way is best. I tend […]