“We assume that certain kinds of questions are only for advanced students, and I think that the irony is that, in many cases, not encouraging all students to ask those questions is why some are not advanced.”

That’s Claire Katz, professor of philosophy at Texas A & M University, quoted in an article on the work she has done to introduce philosophy to pre-college students and to learn about the effects of doing so. 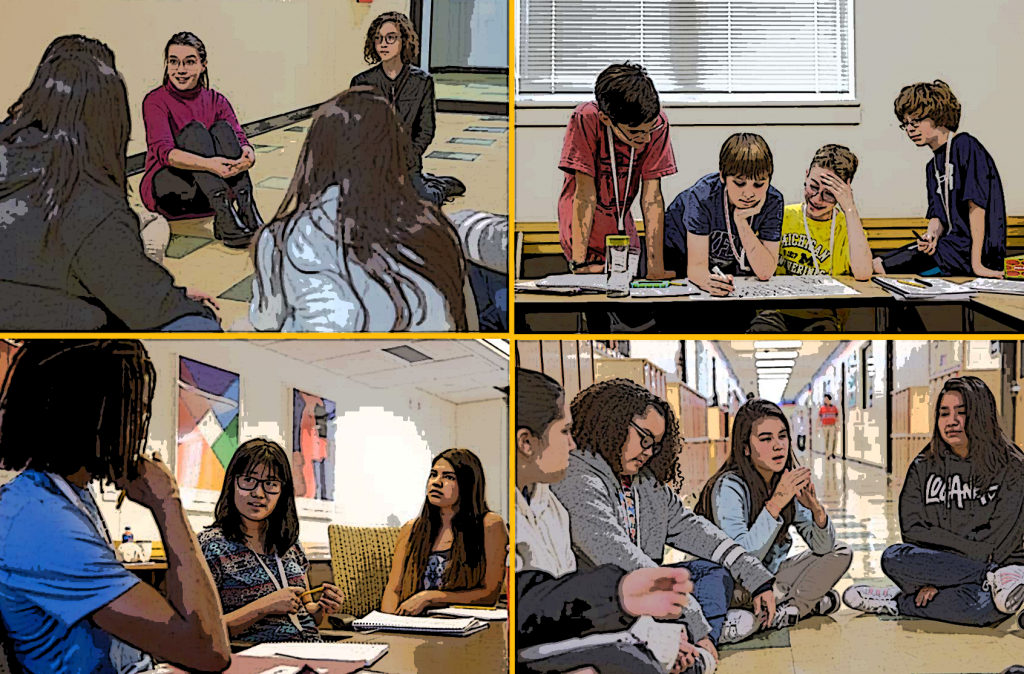 Professor Katz teaches a course at Texas A & M in which her students, making use of Philosophy For Children (“P4C”) materials and methods, “lead thoughtful philosophical discussions and interactive activities among youth in local schools, after-school programs and summer camps.” She also conducts workshops for school teachers and administrators on teaching philosophy to children.

She and her doctoral students are conducting a longitudinal study of the thought processes of students that take part in the philosophy summer camp she runs. The idea is to develop further evidence of the benefits of teaching children philosophy (see earlier discussion here and here).

Such evidence is needed if philosophy is going to make inroads into pre-college curricula, where there is a scarcity of opportunities for introducing new material, owing in part to increased use of class time to prepare for standardized tests. Katz knows that it is not enough that parents notice their children are more thoughtful and that their “dinner conversations are never going to be the same.”

Why should we care about philosophy having an increased role in pre-college education? Well, apart from the educational benefits that accrue to the students, there is also the thought that it will increase interest in philosophy at the college level.

Not many people major in philosophy. In 2014 only 0.42% of the roughly 1.7 million bachelor’s degrees earned in the United States were in philosophy, a figure which has been in decline since a recent high, in 2006, of just 0.51% (see data here). One commonly offered partial explanation for these low numbers is that philosophy faces a hurdle of unfamiliarity: unlike disciplines such as history, English, or biology, philosophy is not usually taught at the pre-college level, and unlike disciplines such as psychology, political science, or business, there is no widespread cultural understanding of what philosophy is. That sounds plausible. (If anyone is aware of research on this point, please share it in the comments.)

“Such evidence is needed if philosophy is going to make inroads into pre-college curricula, where there is a scarcity of opportunities for introducing new material, owing in part to increased use of class time to prepare for standardized tests.”

For what it’s worth, it hasn’t been my experience that there’s a scarcity of opportunity for introducing philosophy into pre-college curricula. Over the last year I’ve either taught or co-taught philosophy for nine elementary and middle school classes at four schools in two states (PA and MT), and in each case the faculty and administrators were easily convinced to devote an hour per week to philosophical instruction (this is the period of intervention that has been studied in the literature on the cognitive effects of philosophy). So far this work has been voluntary, but David Hoinski, Justin Humphreys, and I are seeking funding for supporting up to three philosophers for the next school year. My sense is that there’s quite a bit of interest in pre-college philosophical instruction in American schools today. And it is well motivated both on the principle that philosophical instruction is good for the body politic, and as a response to the over-production of PhD’s in philosophy relative to recent job placement.

I’ve written about this here:
http://quillette.com/2018/01/11/benefits-philosophical-instruction/

So no logic, philosophy of science or epistemology, or even Plato.

At any rate, pre college philosophy is going along in Canada, especially in Ontario, where it has become a standard part of the curriculum. Many are working now to expand it to other provinces.Report

You disagree but offer no argument whatsoever. I read y our linked post, and while it includes a fantastic list of readings — funnily enough, I am teaching several of those Dick novels in a phil lit course right now — it contains no argument either.

For years, I have been serving the local teen population, by doing philosophy presentations at a number of local high schools. The responses are always positive, and I am always asked back. For a year, I taught Sunday school to pre-teens at our synagogue, and focused on elements of Genesis, the Wisdom literature (esp. Job and Koheleth), and the Pirke Avot (Ethics of the Fathers), teaching it pretty much entirely philosophically. It was a big hit.

Teenagers, with their powerful existential concerns and (healthy, developmental) obsession with principles like justice, are a natural audience for philosophical teaching.Report

Hi Carter–you write on your blog:

“When I consider the phrase “Philosophy for Children” my best response is: “The Greek Myths.” I am thinking something along the lines of, “I take it Greek thought and action are deeply connected. Ergo, Heracles and Theseus represent to children models of thoughtful action.”

To begin, it might do well to familiarize yourself with what “Philosophy for Children” has come to mean. I think you’ll find it’s quite unlike the thing you think “The Greek Myths” is a substitute for. There’s actually a lot of storytelling in the way philosophy for children is taught in the U.S. And for the last five weeks I’ve been teaching nothing but Plato and Aristotle to elementary and middle school classes in Bozeman (I see you taught in Montana). One point of orientation I’ve been using is the idea that theoretical and practical rationality share a common root. I was planning to cover Kant’s “Answer to the Question ‘What is Enlightenment?'” this week, but based on the discussion we’ve had about duty, right, habit, and the ipad, I think I’ll take up the question of the place of friendship in the good life.

Anyway, there are lots of philosophical problems, taught in more-or-less the way we teach them to undergraduates, that are easily assimilated to the kinds of concerns that kids face as they grow up.Report

I applaud teaching kids philosophy. Kids can’t avoid philosophy and will be doing it with or without our help. They must make moral decisions and, very soon, political ones. And, of course, they must try to make sense of their world.

My only criticism is that this is so often thought of as “pre-college” philosophy, as if it only matters for kids going off to college. Philosophy is needed by everyone.Report

I think you’re mistaking the term “pre-college” for “that which prepares you for college” as opposed to “before the time/age at which you typically enter college.” I haven’t seen too much mention from such programs of “preparing students for their college philosophy courses,” but have seen many mentions of educating “children in elementary and high schools.” Better to think of that term more generally than narrowly as I agree that philosophy is needed by everyone.Report

I think the key to building interest in philosophy at all levels is to aim philosophy at current real world problems in a practical manner, using everyday language. Here’s an example…

Given the recent 50th anniversary of Martin Luther King’s passing there has been a great deal of general discussion about race across the blogosphere, including philosophy blogs.

Philosophy should challenge the effectiveness of this cultural pattern of discussing race in a vague general way. What is it accomplishing?

Philosophy should use the power of disciplined thought to refocus these general discussions towards an exploration of specific bold plans of action which can effect real substantial change in race relations.

Philosophy should use the power of reason to subject all proposed plans of action to a thorough analysis, weeding out the weaker plans and replacing them with stronger plans.

Philosophy should then analyze the social/political landscape and help society find the most efficient ways of implementing the strongest action plans.

Young people today are very socially conscious and they’re intelligent enough to understand that the problems we are not bothering to solve will soon become their burden to carry. Young people will respond to philosophy if it is accessible, relevant, radical, action oriented, and results based.

If the current culture of philosophical activity is dying, that seems to me a good thing. The sooner long winded fancy talk on obscure subjects nobody cares about is gone, the sooner it can be replaced with uses of reason which are logical enough to grasp that it’s not the 19th century anymore, and that the civilization philosophy depends on is in a perilous state indeed.Report