Halloween is coming around again, that time of year where we have fun making things extra scary. But hasn’t this past year been frightening enough?

So I don’t think we need to discuss, as we have in previous years, the causes of deaths of philosophers, scary philosophical ideas, philosophy horror films, or philosophers’ scary nicknames. And since we won’t be attending any big Halloween parties, we won’t need to think about which philosophy ideas make for good costumes or what the Halloween costumes of famous philosophers should have been. So what’s left?

Well what about the nice part of Halloween? That’s right, the candy. Between the coronavirus and a close election we could all use a bit of the “treat” part of “trick or treat”, no?

So for Halloween this year, philosophers, our task is this: create candies based on philosophers or philosophical ideas, give them good names that sufficiently allude to said philosophers or ideas while also being a good candy name, and describe them for us.

To get things started:

Kit-Kant – It’s like a Kit-Kat, but instead of four pieces it has enough so that everyone can take one. 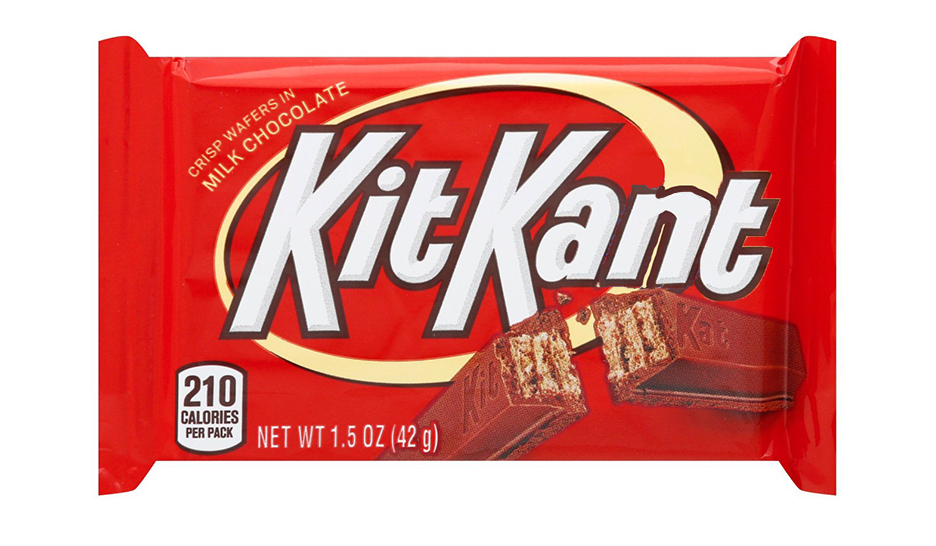 Here are a couple of others:

Carties – Tiny pieces of fruit-flavored wax that you can squeeze, stretch, and melt all you want—they’ll still be wax! Yum!

GEMmies – Hard candies that are so good, you’ll intend to eat them all, but not to have none left.

I made this one a few years ago…
https://www.instagram.com/p/Bb2RMYelT0o/?igshid=1gun0ang1dk8aReport

Thomson’s Life Savers — you can give them out as a treat but no one has a right to them.Report

Adorn-O’s: Administering the wrong life one gummy at a time!Report

I posted this on Twitter, but I’ll reproduce it here, too:

Śrīharṣa’s Khaṇḍanakhaṇḍakhādya is literally the “Sweets (khaṇḍa-khādya) of Refutation (khaṇḍana).” Its sound in Sanskrit is a bit like chewing up and spitting out, so to preserve the alliteration, you might take it loosely as “The Candy Crunch of Criticism.”Report

AyerHeads — Can’t say whether they’re good or bad, but they’ll have you expressing some feelingsReport

Proposed change to Kit-Kants: four formulations in one supreme bar!Report

Mr. Goodman – they’re delicious and eaten before time t, or disgusting and eaten after tReport

Reeces Peirces: they come in packs of three and they determine the way they’re pictured on the wrapper.
M & E’s: they have a hard outer shell that many softer “Continental” candies lack.Report

Baby Ruth Changs. Perfect if you have a sweet tooth that’s insensitive to mild sweetening.Report

Chal-Mars Bar: physically identical to a Mars bar, but tastes like nothing at all.Report

GobsPoppers – each box contains dozens of candies, including one horrible tasting one — just to prove that the others are delicious.Report

ButterSinger: if you don’t give it to someone who doesn’t have one, you’re doing it wrong.Report

I had a student that baked Gettier cookies for the class. They had carob (fake chocolate) chips on the outside, and real chocolate chips hidden inside.Report

Rather than follow ad hoc individual recommendations like this, I prefer to get a Philosophical Gourmet Candy Box.Report

These may not be the best of all possible biscuits, but they are rather good and genuinely named after Leibniz.

They ARE the best of all possible cookies!Report

Taurek’s Life Savers– Hog them all for you and your friends!Report

IMPLI-candies: you cannot eat the first and not the secind oneReport