It’s Halloween, and philosophers everywhere are dressing up as obscure ideas and concepts that they’ll have to spend too much time explaining. Costumes are fun, but let’s not forget the horror, shall we?Philosophy has the power to strike fear into people’s hearts. Even the professionals. So let’s ask:

Which philosophical idea’s truth do you most fear?

(Yes, this question does not specify whether you’re supposed to take the probability of an idea’s truth into account when identifying it as the one you most fear. Such unsettling ambiguities you’ll just have to cope with this Halloween.) 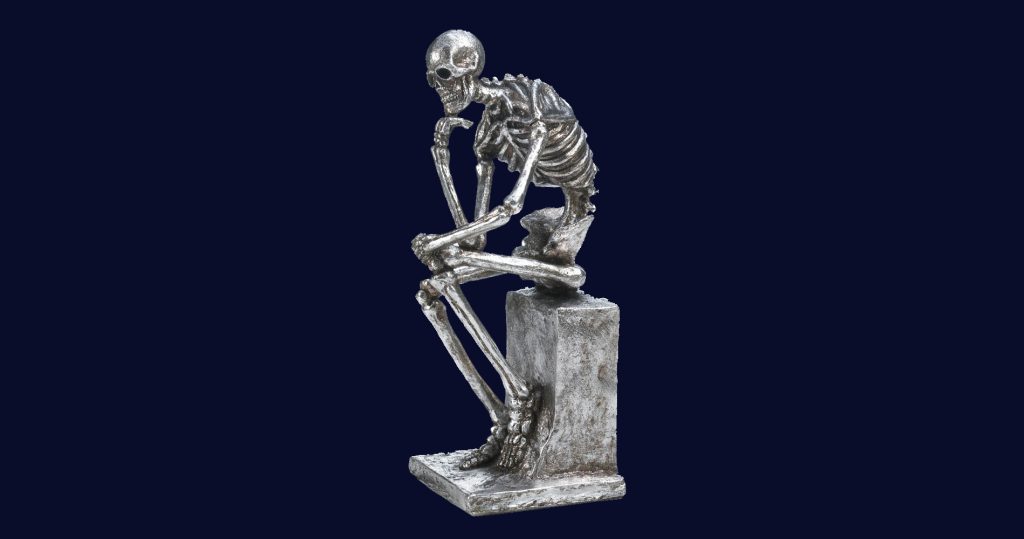 The answer is clear:
“What, if some day or night a demon were to steal after you into your loneliest loneliness and say to you: “This life as you now live it and have lived it, you will have to live once more and innumerable times more; and there will be nothing new in it, but every pain and every joy and every thought and sigh and everything unutterably small or great in your life will have to return to you, all in the same succession and sequence – even this spider and this moonlight between the trees, and even this moment and I myself. The eternal hourglass of existence is turned upside down again and again, and you with it, speck of dust!”
Would you not throw yourself down and gnash your teeth and curse the demon who spoke thus?… Or how well disposed would you have to become to yourself and to life to crave nothing more fervently than this ultimate eternal confirmation and seal?” (Nietzsche, The Gay Science)Report

Certain strains of speculative theistic satanism can be scary, if you consider the broader gnostic and Neoplatonic background–from the Ricoeurian point of view about the symbolic power of the sacred. Christianity and atheism can be far scarier of course, but you have to start with theistic satanism to point out just how scary the reality if the sacral dimension of life can be. And finally, proceeding ever out of Halloween, scariness is just a stand in for the emotional registration of the power of reality in its true home of ultimate nothingness or divine beyond-of-being supernacy. The transnatural is always there in our metaphysics, even our self-hating metaphysics where “realism” lacks a transcendental foundation. Ghosts, living and incarnate ghosts, and the great chain of beings proceeding from the sacred, and everything in the wild imagination participates in reality in different ways, and our job as philosophers is to know the ways and how they connect to the way of being.Report

The thesis of David Lewis’ “How Many Lives has Schrödinger’s Cat?”Report

Philosophical zombies — they do and say everything we do, but without the “what it feels like” part. Sounds dangerous to me. And, by definition, we can’t tell who they are among us.Report

I think modal realism is scary once you consider what would be included in the realm of all possible worlds. It would mean that there are universes inhabited by people/beings suffering the worst fates possible.Report

There are people in this universe suffering the worse fates imaginable.Report

Jason "Halloween Is for Gaelic People Only" Brennan

Hands down, the most terrifying philosophical idea, at least in the modern era, has got to be Utilitarianism. A random assortment of “important” people deciding who and what has “utility” relative to their own arbitrary will (more or less), is responsible for more suffering death and destruction just in the 20th century alone, than in all of the rest of human history. If I could erase one bad idea from history, it would be that one.Report

Really? I’m not entirely sure that Hitler, Stalin, Mao etc. were utilitarians exactly. Maybe I just missed the references to Bentham in the Little Red Book.Report

Is the idea that we should do good things even worse? Good has been used as an excuse to do everything bad done in the name of utilitarianism and more besides. And what about social justice? Is that a terrible idea? All the communist atrocities were done in the name of social justice, after all. And what about the idea that we should strive to be healthy? That’s been an excuse for eugenic killing. Alternatively, maybe an idea isn’t shown to be an awful idea by awful things being done in its name, since any idea can have awful things done in its name, and the better the idea, the better the idea, the better an excuse it makes to hide behind.Report

If it turned out that at no level, object, meta, meta-meta, meta-meta-meta, etc. in no part of the “world” however world is defined, was classical logic the correct logics, I…do not know what I would do.Report

One student in my MA was an outright egotist. She honestly claimed ‘if it is good for me, it is good.’ Her position scared me (and others in the program) then. I think she became a lawyer…Report

I think that’s just how entailment works. Did she say that what is good for her is best? Because that would be weird.Report

Sosa’s distinction between animal and reflective knowledge. Thinking about what animals might know, and what they could do with their their knowledge is downright horrifying.Report

The absence of eternal damnation (for those who deserve it)Report

Whatever theory of the nature of moral desert leads otherwise cognitively functional people to believe ^this sort of thing.Report

…and that’s why I now drive an ambulance.

For me, the scariest idea is that suicide can be found rational if one believes life is meaningless.Report

Scary? – Materialism (though I am starting to think it’s true)

Repugnant? Ethical Egoism or Randian Objectivism (though I hardly consider her a philosopher so….)Report

What frightens you about materialism? (Genuine, not rhetorical question).Report

The idea that nobody knows much of anything.Report

As a meat eater I find the prospect that animals might have a significant moral status pretty scary. I’m not convinced that they do (hence being a meat eater). But the stakes for being wrong are pretty high.Report

As a vegan I find the prospect that animals might organise themselves into revolt against the species which for longer than they can remember farmed them to extremes of misery with no exception for non-meat eaters, scary.Report

Trivialism, and relatedly, anything that implies trivialism is true: Curry paradoxes, tonk being a genuine connective, classical logic being true.

Any version of the correspondence theory of truth being false (incoherent?). I’m not sure what kind of meaningful epistemology or standards of evidence or reasoning we could have if there were no external check on our assertions.Report

*All versions, not any versionReport

Skepticism. I can see no good reason to believe my senses, nor my cognitive faculties. Brr!Report

I find the denial of Mark Johnston’s thesis in Surviving Death the scariest.Report

Everything is water. (I have an irrational fear of drowning. On the other hand, if I’m water too …)Report

Anything that ends is -ism.Report

I feel sure this post is just an elaborate attempt on Justin’s part to get someone to write “BOO!!thius, mwhahhahahaha!”Report

Obviosly Stirner. I don’t think I could handle that many spooks! (or being the creative nothing with the prerogative to control all things which are my property, or the idea that someone else migut think that they have that prerogative themselves)Report

Arch-pessimist that I am, I can think of only a few things more terrifying than some of what our own world actually has on offer, but certainly one of them would be that life has an *intrinsic* meaning imparted by a cosmic arbiter. I would rather live unsupervised in an indifferent and largely deterministic thresher (as in fact I believe I do) than in a world whose familiar structure and content–every horror and form of suffering in every human life–is coextensive with the preventable but intended design of some more powerful agent.Report

Crude hedonism, where well-being is defined solely as pleasurable mental states. (I.e., that we shold aim to end art, culture, and science once we have become technologically advanced enough to put ourselves into a perpetual drug-induced stupor until our sun dies.)

Also, the near-universal prevalence of hedonism as an answer to the Fermi paradox.Report

I’ll prefix this by saying I really don’t know what I’m talking about these days, but here’s my two cents.

Functionalism, especially of a computational bent, has some pretty scary implications, when you factor in the substrate neutrality of computation.

There’s the obvious worries about my reality being some sort of simulation (whether that just applies to my own POV or a ‘wider’ reality with other captive agents in it too). Matrix-style stuff. But at least those scenarios have a reasonable chance of enduring, even if for a malign or dubious purpose.

My real worry is that, if my reality just supervenes on some suitably-arranged functional structure, there’s no guarantee it will continue at all. A fleetingly-instantiated configuration of sand grains on a beach might by sheer chance be “just so” allowing a few frames of the simulation to occur in sequence, and then the whole thing might collapse instantaneously. From the inside, you’d never know a damn thing.Report

That the universe is not in some way organized to promote our flourishing.Report

There are many that are easy to hate for the damage they do but none that I fear.Report

The only philosophy paper I’ve read that has actually scared me while I was reading it is William James, “The Will to Believe”. It’s scary to look out into the abyss and wonder – what if the theists are right, and there really is *evidence* for religious belief, but you’re only able to get it by taking a leap of faith down into that abyss? This seems to have radically skeptical implicationsReport

Hi Kenny. Why be scared? According to the reports everybody who looks comes back with good news, although not entirely good for theists. Indiana Jones found there was a magic bridge.Report