A new study in political science provides evidence for an explanation of why “women are more likely to leave the profession than men” and why “those who stay are promoted at lower rates.”

The study, “You Research Like a Girl: Gendered Research Agendas and Their Implications,” looks at the gender distribution of authors on various topics in political science and then checks to see how well those topics are discussed in top political science journals. 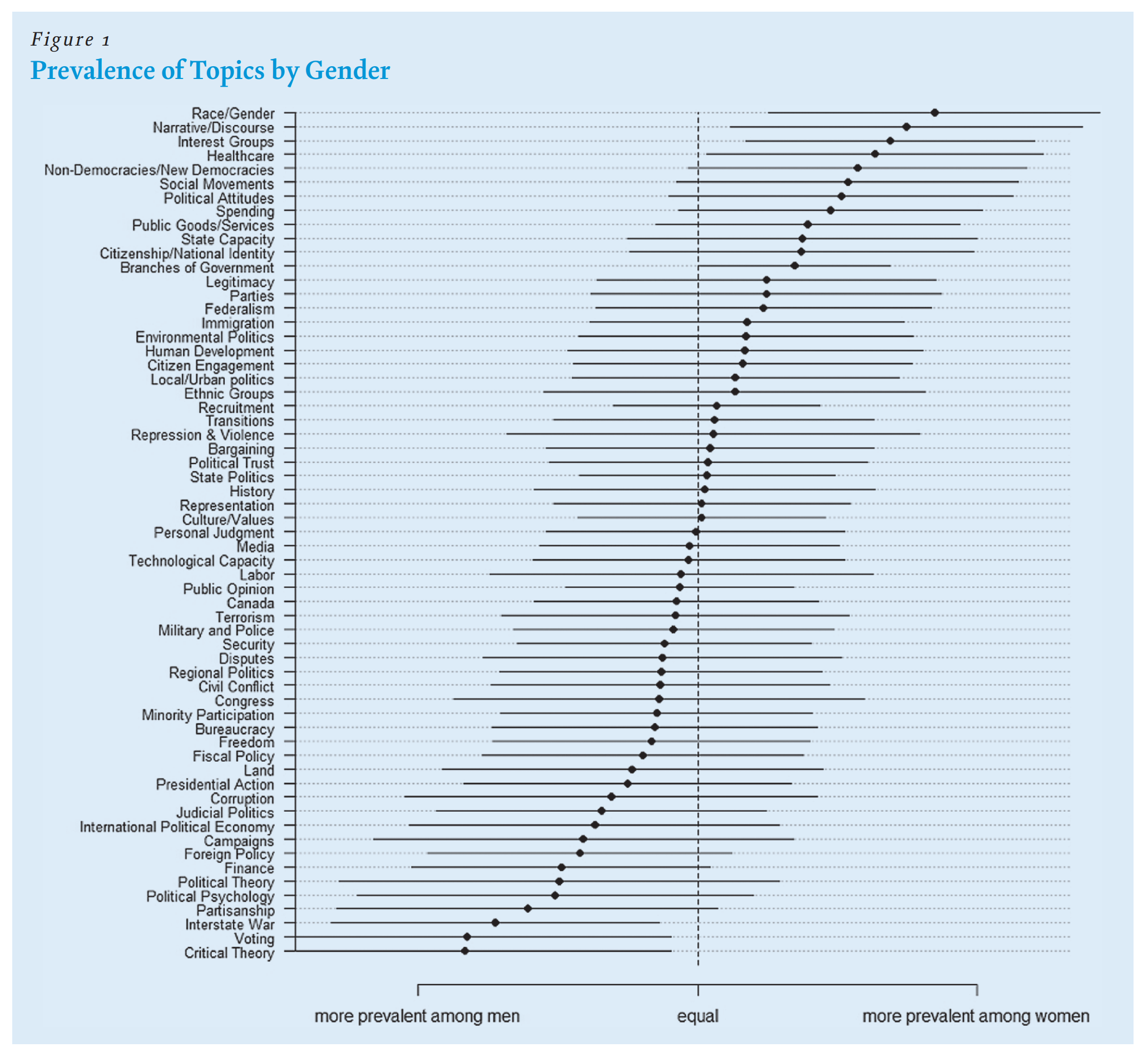 from “You Research Like a Girl: Gendered Research Agendas and Their Implications” by Ellen M. Key and Jane Lawrence Sumner

They then asked, “Are topics most favored by women less likely to appear in top journals?” adding:

If this were true, it could provide an explanation for the leaky pipeline. That is, if women pursue topics that—for whatever reason—are less likely to be published in major journals than topics pursued by men, they may fare less well in tenure and promotion and therefore be less likely to be promoted or more likely to leave the discipline. If “appearing in the top three journals” is also a heuristic for being valued by the field as a whole, this could indicate that topics written about more often by women may be less valued by hiring committees, suggesting another pathway by which women may leave the discipline.

At this stage I don’t think we have as careful a consideration of the evidence for our discipline to draw this conclusion. We do have at least one depiction of the gender distribution of philosophy research topics. However, it is based on paper topics, rather than dissertation topics, which Key and Sumner chose to use because topic choice at the dissertation stage is likely less corrupted by the topic-publication bias they were exploring. We also have some studies showing publication discrepancies by gender (e.g., women are less represented in top ethics journals, women are less represented in top philosophy journals), but to my knowledge there has not been much work determining the causes of this.

Pointers to other relevant work are welcome.

Related: Demographic Diversity is Good for Philosophy; Underappreciated Articles by Women Philosophers 2008-2018; Ways to Increase Diversity of Authors in Philosophy Journals; Percentages of U.S. Doctorates in Philosophy Given to Women and to Minorities, 1973-2014

“Moreover, in AJPS, the seven women-gendered topics were the primary subject of 8.3% of articles, whereas the four topics associated with men were the primary subject of 20.2% of articles. For APSR, the percentages were, respectively, 8.1% and 20.1% and for JOP, 5.6% and 19.2%. Nevertheless, this is roughly proportionate to the primary topics in our dissertation sample: 8% of dissertation abstracts were women-gendered topics, 21.1% were topics favored by men, and 71% were gender-neutral topics. This means that although topics favored by women appear at lower rates than other topics in the top three journals, it is the same lower rate at which they appear in dissertations.”

Woops. Forgot an ellipse before “Nevertheless”Report

Which came first, the chicken or the egg?Report

The egg, because chickens evolved from small dinosaurs.Report

Which came first, the demoralised profession or the substitution of facetious wisecracking for serious discussion of issues affecting us all?Report