The following is a guest post* from Eric Schwitzgebel (UC Riverside). It also appears on his blog, The Splintered Mind.

Percentages of U.S. Doctorates in Philosophy Given to Women and to Minorities, 1973-2014
by Eric Schwitzgebel

The Survey of Earned Doctorates is a questionnaire distributed by the U.S. National Science Foundation to doctorate recipients at all accredited U.S. universities, which draws response rates over 90% in most years. The survey includes data on gender and ethnicity/race. Data for 2009-2014 are readily available online here. At my request, the NSF sent me gender and ethnicity/race data for philosophy going back to 1973.

With the NSF’s permission, here are the raw data. Philosophy response rates averaged 92% per year, and were over 85% in all years but two.

(Note: “Ethics” started being collected as a separate doctoral subfield in 2012. For gender analysis, I have merged the 83 recipients in that category with the 1442 “philosophy” doctoral recipients during the same period. Given the small numbers, much of the race/ethnicity data were suppressed, so for race/ethnicity analysis I have excluded the “ethics” recipients. The numbers are not sufficiently different from “philosophy” to make a material analytic difference in a pool of over a thousand (54/83 [65%] male; among U.S. citizens and permanent residents, 52/68 [76%] non-Hispanic White).)

Almost all respondents reported gender as male or female, with only 25/14495 respondents (0.2%) declining to self-classify gender. The total number of respondents increased from an average of 354/year in available data from the 1970s to an average of 484/year for available data in the 2010s. The chart below shows the percentage of women by year, along with both a linear regression line (green) and the best fitting quadratic curve (red). 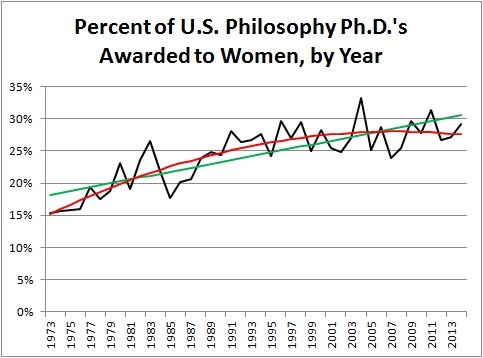 I tried a quadratic fit to test the hypothesis that the rate at which women are entering philosophy has flattened out in the 21st century, after an increase in the 20th (see for example, these data on publication rates in elite journals and this observation by Linda Alcoff).

The quadratic curve does indeed fit much better than the linear, with a difference of 11.0 in the AICc scores (which penalize models with more parameters): The AICc relative likelihood of the quadratic vs. the linear is .996 to .004. In other words, the visually apparent flattening is highly unlikely to be chance variation in a linear trend. (I use the quadratic only to test for flattening, not to extrapolate beyond the measurement years.)

Conclusion: Since the 1990s, the percentage of women receiving Ph.D.’s in philosophy in the United States has been virtually unchanged at about 27-28%.

Data on Ethnicity and Race:

As expected, the large majority of respondents reporting both ethnicity and race were non-Hispanic White. Here are the numbers, with a linear regression. I also tried a quadratic curve, since I’d done it for the gender data, but it lay literally right on top of the linear regression line (with differences < .01%), so the simpler linear model is preferred. 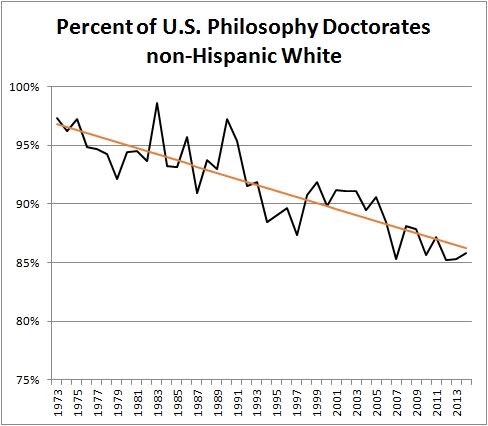 As is evident from the chart, although a large majority of respondents are still non-Hispanic White, the percentage has been decreasing since the 1970s, and (in contrast to the gender data) there is no apparent flattening of the trend.

The numbers in all other categories are small, and are better seen in a decade-by-decade aggregation. These numbers include only U.S. citizens and permanent residents, but I have re-included respondents not reporting ethnicity or race. They are arranged from highest number to lowest.

Hispanic or Latino (any race):

Asian or Other Pacific Islander:

Most notable, of course, are the low percentages generally.

Also notable is the increase from 1-2% Hispanic or Latino in the 1970s-1980s to 6.3% in the 2010s. This is still, however, well below the approximately 17% of the U.S. population that is Hispanic. It is also matched by a sharp decline in “Ethnicity not reported”, raising the possibility that it is in part a reporting effect.

The percentage of non-Hispanic Black or African American U.S. PhD recipients does not appear to have increased much if at all since the 1970s, hovering around 1.4% to 2.2%, compared to 13% of the U.S. population.

HT Carolyn Dicey Jennings for her input. We are collaborating on a paper together on some of these topics. Comments, corrections, and new analyses welcome.

Actually, they are right, nowadays these are mainly given for complying bureaucratic standards.Report

That interpretation hadn’t occurred to me, Derek — that it’s a “gift” of some sort, which is what I think you’re pointing toward? Thanks for calling it to my attention. I think “given” can be read pretty neutrally, but in retrospect “awarded” (as in the figure title) or “earned” might have been better. (If we *really* want to cavil, not all that’s rightfully earned is actually received, so maybe “awarded” would be better in those grounds?)Report

Agreed. That jumped right out at me. I think Awarded covers it nicely.Report

One thing never gets mentioned: namely, are these lower numbers due to self-selection by those groups? Face it, folks, philosophy is not a burgeoning profession that offers growth and income to minorities, not because they are minorities, but because our society has devalued philosophy itself (jobs, jobs, jobs in the “business sector”). Yes, we all know things such as the success of philosophy majors in getting into law school, and so forth. But our society is stressing STEM, STEM, STEM. Somehow the subtext of such published percentages imply a bias, but maybe the bias is against the field itself?Report