In the following guest post*, Chad Mohler, professor of philosophy at Truman State University, describes a cool new argument-mapping app he has created and shares a special offer with Daily Nous readers. 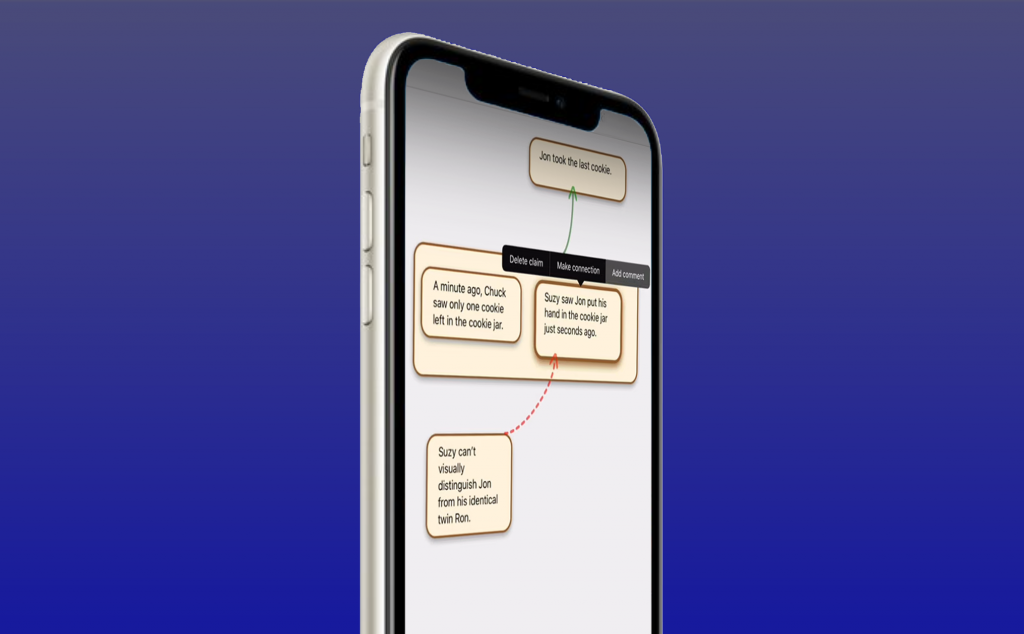 From Maps to Apps:
Introducing Students to Argument-Mapping in the Physical and Digital Realms
by Chad Mohler

Longtime Daily Nous readers may recall earlier posts (here, here, and here) about argument mapping. There are many studies that offer empirical confirmation of the cognitive benefits of argument-mapping: see a few listed here, along with studies mentioned in the Daily Nous posts. The studies suggest that argument maps can help individuals improve in their critical thinking and in their understanding of the arguments they encounter throughout their lives.

Learning to map arguments, though, is not a skill that comes quickly or easily to most people. The kind of intensive, reflective practice needed to become good at it can be discouraging to students approaching argument-mapping for the first time. In my Introduction to Philosophy classes, I’m sensitive to that potential for early frustration. To help counter it, I introduce students to mapping techniques in a gradual way. In this post, I’d like to describe some of the practices I’ve used to ease students into argument-mapping.

The following is one such practice. Long before students have to extract from a text an argument to map, I get them used to assembling argument maps using sets of premises I provide them. In an in-class activity I call an argument “map-a-thon,” small groups of students lay out pieces of paper and colored string to create maps of a line of reasoning presented in some textual passage. Each claim associated with the reasoning is on its own sheet of paper, and different colors of string indicate whether parts of the argument structure either support (green) or challenge (red) other parts. During the exercise, I give students an unordered set of these claims, and I circulate around the class and offer tips to students as they attempt to arrange the papers in the proper way to construct an argument. They are, in essence, putting together an argument jigsaw puzzle. An image of part of such an argument map is included below: 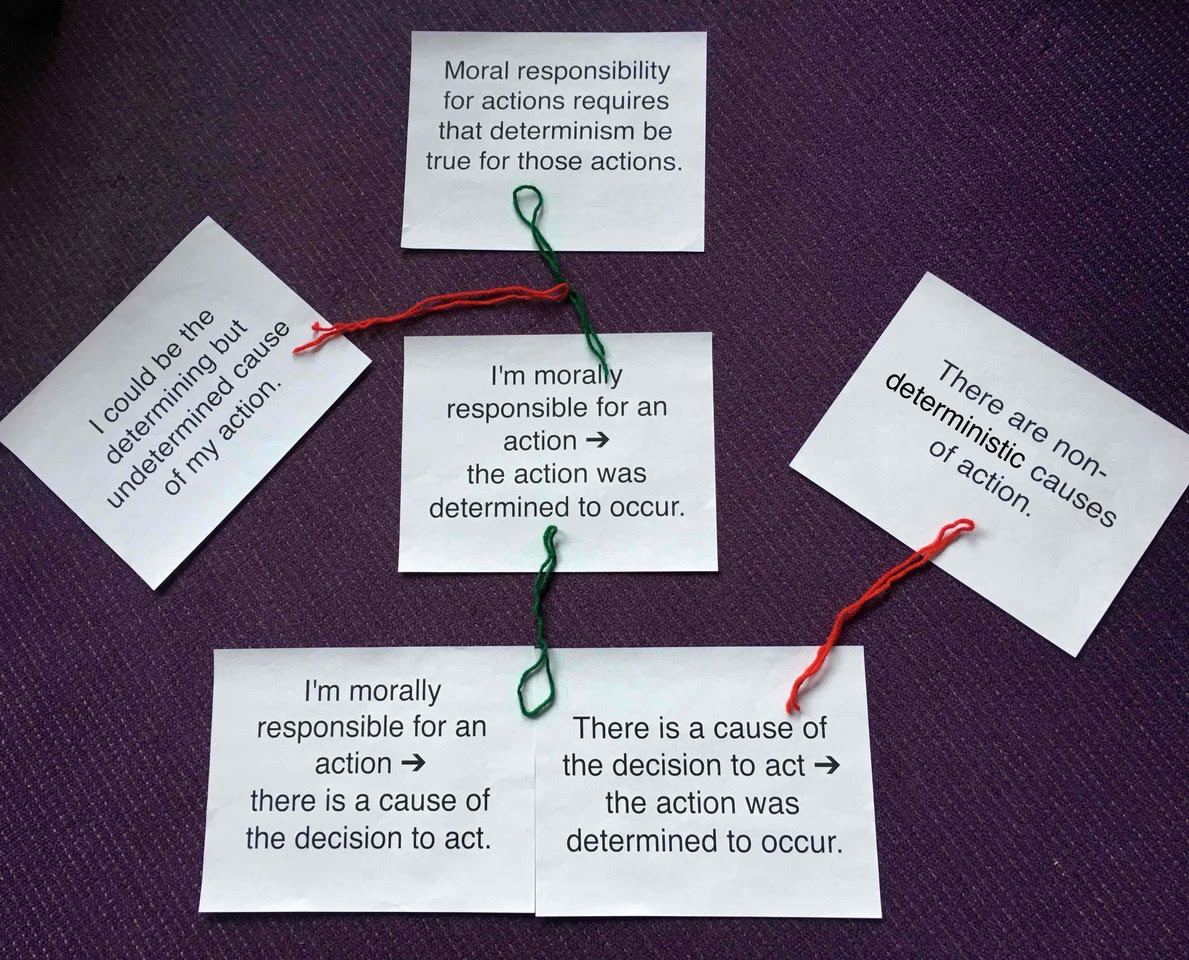 As a next step at introducing argument-mapping to my students, I provide my students with the ability to do electronically what the map-a-thon allows them to do with physical objects. Using technology to construct argument maps has the following key advantage over map construction on paper: it allows students easily to edit the claims they use in their maps and to move them around (on a screen) to reflect the structure of an argument. Argument-mapping software also affords students the ability easily to share maps with each other and with their instructors in order to receive useful feedback.

Unfortunately, software solutions for argument-mapping are frequently unwieldy and often get in the way of students assembling maps. I wanted to provide students with a mapping experience that emulated the map-a-thon as much as possible. Not finding such a piece of software that could provide such an experience, I decided to make one myself. I have some experience as an iOS developer, and I set about creating an app. The result is ArguMap, which is the first iPhone / iPad app uniquely tailored and optimized for the creation of argument maps.

When designing ArguMap, I strived to ensure that the technology recedes to the background as much as possible. The touch interface of ArguMap maximally emulates physical interaction with objects. ArguMap users can move claims around on the screen just as easily as physically arranging pieces of paper in the map-a-thon. ArguMap also allows its users easily to group claims together to show how they jointly (rather than independently) provide reasons in favor of (or against) other claims. ArguMap makes that grouping of claims as easy as dragging the claims onto each other. Claims can be ungrouped just as easily, by dragging them out of a group. With simple drags and taps, ArguMap users can additionally quickly connect or disconnect parts of a map. As a result, trying out different lines of reasoning is as easy as arranging cards on a table.

With thicker or thinner connecting lines, ArguMap can also show how some claims offer stronger or weaker reasons in favor of (or against) other claims. In addition, individuals can easily provide feedback on the various parts of a map using collapsible virtual notes. Commented-on maps can then be shared with their creators via email, text message, Apple’s Classroom software, or other sharing mechanisms. This is great, for instance, for teachers to provide feedback on student work or for students to offer peer reviews of each others’ maps (which is especially useful in remote learning contexts).

Below is a screenshot showing various parts of the ArguMap interface: 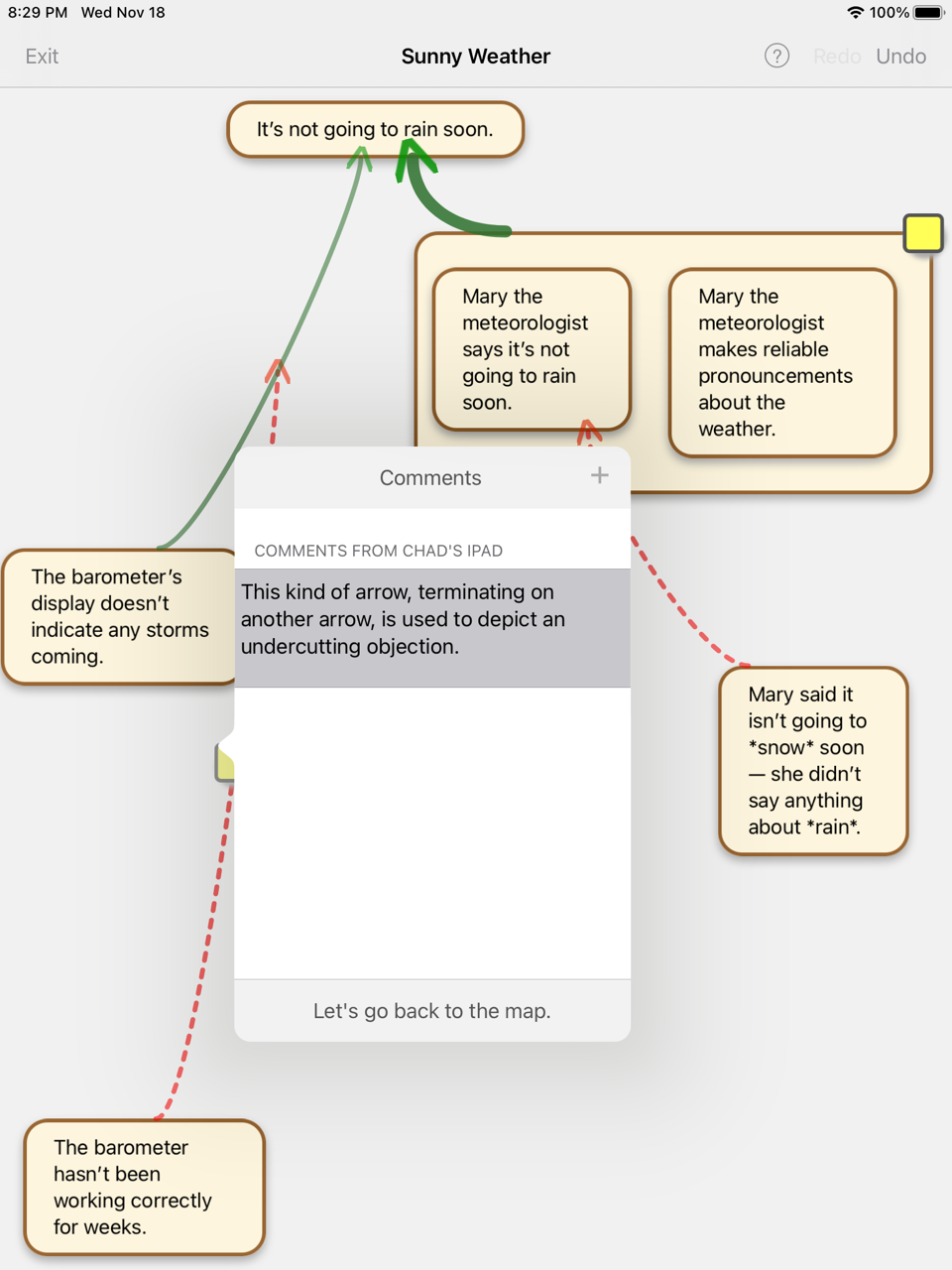 Here is a 30-second video clip of ArguMap in action:

My Introduction to Philosophy students have really enjoyed using ArguMap to construct their argument maps, and I am eager to share the app with you. ArguMap will be available publicly in the App Store beginning November 25, 2020; it runs on all iPads, iPhones, and iPod Touches running iOS 14 or later. It is free to download and can be used forever as an argument map viewer. Users have access to a free 30-day trial of the app’s powerful map-editing functionality. A one-time in-app purchase of $8.99 unlocks those editing features for use beyond the trial period. Discounts of 50% are available to educational institutions who purchase 20 or more licenses via the Apple School Manager program.

I am pleased to be able to offer a promo code, redeemable for a free copy of ArguMap, to each of the first 50 Daily Nous readers who email me with their request for such a code. You can find out more information about ArguMap at its website. I am also happy to answer any questions you have about ArguMap or, in general, about my use of argument-mapping in my Introduction to Philosophy courses. You can email those questions to me. Happy mapping!

Is an Android app in the works?Report