Imagine the following: you write an academic paper in philosophy, a poet then writes a poem about your paper, and then you respond to the poet.

That’s the intriguing idea that philosopher Aaron Meskin and poet Helen Mort have made real with their forthcoming volume, Opposite: Poems, Philosophy & Coffee. In the following guest post,* Professor Meskin (currently at Leeds, but soon moving to the University of Georgia) explains how the book came about and shares an excerpt from the introduction and one of Dr. Mort’s poems. The post is cross-published at Aesthetics for Birds. 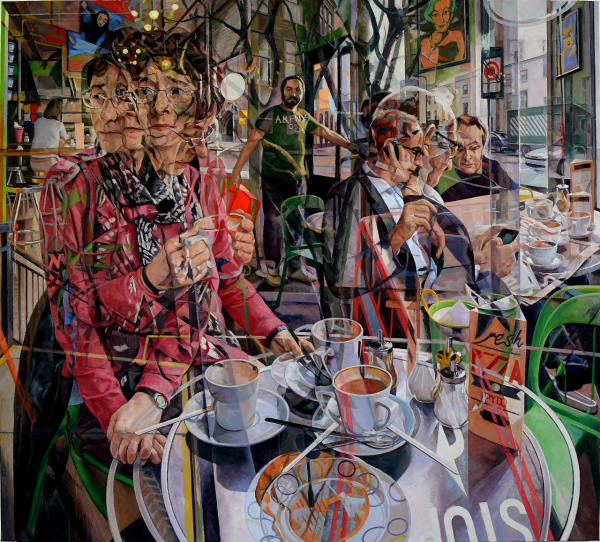 An Experiment in Philosophy and Poetry
by Aaron Meskin

The British poet, Helen Mort, and I recently explored a novel way in which poetry and philosophy might be in dialogue. We put together a book, Opposite: Poems, Philosophy & Coffee, which is just about to be published by Valley Press, an independent publisher located in Scarborough, UK.

The core of the book comprises ten poems composed by Helen in response to her reading of ten recent essays in philosophical aesthetics which I suggested. The main criterion for selection was a suspicion that Helen would find the paper interesting. The philosophers (Jeanette Bicknell, Eva Dadlez, Anne Eaton, John Dyck, Cynthia Freeland, Sherri Irvin, Eileen John, Thi Nguyen, Nick Riggle, Jon Robson, me) then briefly respond to Helen’s poems. An introduction explains the genesis of the work, and two codas reflect on the relationships between coffee, philosophy and poetry.

Topics addressed in the book include bad art, itches, meals, oversinging, portraits, rock climbing, street art, tastimony, tattoos and a song by Belle and Sebastian. We’re really excited by the way it turned out.

Why coffee? We hatched the plan for the bookshop in a local cafe conveniently located opposite the University of Leeds where we both worked when we met. The first poem that Helen wrote—the piece that gave us the idea for the project—was set in another of our favorite Leeds coffee places, and it responds to a co-authored paper of mine which addresses the epistemology of taste. And the whole project was based on the idea that the book might be like a cafe (or bar) conversation between a poet and a philosopher (or ten).

All the royalties from the book are going to support a Leeds charity which addresses childhood hunger. To order it, go here.

Here’s an excerpt—the first bit is a piece from the introduction where Helen talks about her process, and then there’s a poem by Helen prompted by her reading of Eileen John’s “Meals, Art and Artistic Value” (originally published online and open access in Estetika), along with Eileen’s response. You can read the abstract of Eileen’s paper and download a complete copy of it here. To read Helen’s response to Eva Dadlez’s work on the art of tattoos, mentioned in the excerpt from the introduction below, along with Eva’s response, you’ll have to get the book. 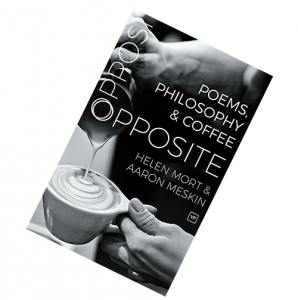 From the Introduction (by Helen Mort)

I was excited and inspired by the papers Aaron had begun to send to me, particularly Eva Dadlez’s work on the status of tattoos as works of art. As I began to try to write poems in response, I sometimes got a little weighed down by the idea of trying to make my creative responses ‘hold’ or contain some of the theory explored so eloquently in the papers. In short, I was trying to make them too directly philosophical. The resulting pieces were abstract and seemed dead on the page. When I returned to Eva’s paper for another read, I decided to try a different approach and react to her consideration of tattooing-as-art by creating my own version of a portrait, a sketch (in words) of famous tattooed lady Betty Broadbent. This response was much more tangential than the pieces I’d tried previously and freed me up to react to the theories and proposals I was encountering in a looser way. I couldn’t hope to paraphrase the philosophers I’d been reading, nor should I try. This needed to be a dialogue, a sprawling conversation, the kind you might have in a bar late at night.

Learning to eat again
is like learning to run
down a mountainside,
I mean really run, your
legs freewheeling,
your ribs bright spokes
in your chest. It’s like
learning to fall asleep
in someone else’s arms,
or like that exercise in art
class where you don’t
look down at the page
until the end to see
the bulbous, lovely
shapes you’ve made.
I have acquired the
language of colour
and shade. I have
renounced the minimalism
of Ryvita and apple peel.
I have abandoned
the expressionism
of meat-rind in the plant pots
potatoes hidden in pockets
sponge pudding pushed
around the bowl. So,
when you place a dish
of mackerel down
in front of me on our first
meal together, I see
the jewelled detail
of blackberries, the sweep
of buttered mash,
the texture of kale.
I say this is a masterpiece
and mean it, then
you arrange each
artful item
on the plate
and together
we demolish it.

This poem makes me really happy. It is remarkable to me that Helen Mort could make such a beautiful, flowing, moving leap from my earnest attempt to write about meals and artistic value. Her poem does the thing that I love but do not understand about poetry, as it packs more into its forty-one short lines than can fit into pages and pages of a philosophical essay. Let me try to talk about what that ‘more’ is.

Her title is “Learning to Eat”, and the first line is “Learning to eat again”. This is a hook for me right away, because I do not think of eating as something I learned to do or would have to relearn. But that thought has changed by the end of the poem. The first simile given to tell us about learning to eat again, that it “is like learning to run / down a mountainside”, is a great image of bodily freedom and almost tumbling downhill motion—but the mystery of the hook is still there. Why do we need to learn this? Can’t we just let gravity and the mountainside have their way with us? But with that vivid motion in mind, you can remember that although it is in a way natural and hard not to do, it is also not exactly easy to do. It takes coordination and concentration and being ready to adjust at a moment’s notice. The poem brings out how eating does and does not “come naturally” to us. We will eat somehow or other, if there is food available, but we will not inevitably eat in a way that has the freedom, energy and finely adjusting, coordinating ease that can be had. We may have to learn it, and part of what the poem does is make that project bigger or deeper than I made it.

I was trying to say that in having meals, though we are not constituting works of art—roughly because meals resist the pointed purpose and integrity of art—we can do things with artistic value. That value involves “taking reflective charge” of possibilities for goodness. This poem takes charge in that way: as I am trying to say here, I could not have seen the possibilities for goodness that happen in this poem. It does this in part by making the “masterpiece” of a meal be a matter of people meaning that it be so to each other. Maybe this is a deft, heartening argument against my claim—if so, I don’t mind! In the vocabulary of the poem, that we learn to eat well, perhaps happily demolishing a dish of buttered mash and mackerel together, seems to be hard and easy. It is not only a matter of artistic value; it takes openness to what people are, as bodily, artful, moving, learning beings.