I still hold that there is an important and significant role for traditional forms of philosophy but the question remains, is there something more to philosophical thinking that we can access through engagement with poetry which is filled with rich images, emotional sensitivity and attention to language?

That’s a question that Karen Simecek (Warwick) raises in a recent interview about poetry and philosophy at 3:AM Magazine. She notes what I take is a common skeptical view about whether poetry can be a kind of philosophy, expressed by Peter Lamarque, who “thinks that poetry cannot be philosophical because the poem itself does not offer philosophical propositions which it establishes and defends through principles of logical reasoning.”

Simecek says “it’s clear that the poem does not rely on argumentative structures and logical reasoning in order to establish its themes” but doesn’t take that as decisive because it takes for granted a certain conception of what philosophy is. She says:

Though “not all poetry will count as philosophical,” some of it will, she argues. How?

Poetry can make a significant and valuable contribution to philosophical inquiry by facilitating active, self-critically aware and rational thinking about the concepts we use to capture aspects of human life. Poetry allows us to consider the structure and meaning of our everyday concepts with reference to the human subject in play. The experience of reading is able to achieve this philosophical thinking because the reader is encouraged to adopt a human perspective, in other words, ‘the standpoint from which we are best able to bring to light the range of values, desires, frustrations, experiences, and practices that define the human situation’ (Gibson 2009, p. 1). The experience of reading poetry is unique in the way it implicates the reader, revealing the values we have embedded in such concepts through our use of them, which could not have been established using valid arguments. We come to think of human life in this way through poetry because of the images we are presented with and as readers we are required to do more than merely make these connections, we also evaluate and appraise them.

She makes use of a couple of poems to make her point, including “The Drift of Things” by Robert Gray and “The Execution” by Alden Nowlan to make her point. Here’s an excerpt of Gray’s poem:

Things, Berkeley says, are the language of God,
this world that we know is really His thoughts—
which Hume remarked brings us no conviction,
but to me is almost justified,
for things are worthy of such existence,
of ultimate stature. It often seems
I am listening to them. What could it mean,
that intuition? I think the appeal
is their candour, it’s the lack of concern
at being so vulnerable. So we sense
they are present entire. One feels these things
that step through the days with us have the fullness,
in each occasion, of reality.

The clouds on water; in reeds, a boardwalk;
a bus that rides the dust like a surfboard;
the lizard, tail hung from a mailbox drum,
inert, all a long-shadowed afternoon;
the planks through mud, from where chickens’ pollard
is thrown; the skirmishing of cherry trees
in bloom, with sabres of wind; the warped length
of a boat on the beach, as if replete,
that’s warmed by morning; the cobwebs of foam
on the shore; or an avenue of trees
to exalted snow—these are each itself
and no other thing. It’s plurality
we experience, it is differences,
not the smear of Oneness—the haecceity
we knew as children. (This is mysticism
for materialists.) Glad animals,
for us phenomena were then enough;
we took variety and relations
as literally, we’d find out later,
as William James had enjoined us to do.
We were so awed, so entranced, in childhood
by objects’ insistence, to us they’ve seemed
sufficient. That ‘concrete particulars’
are basic existence was something that we’d
have agreed with Aristotle about.

Check out the interview for her take on the philosophical work this poem does, and much more. 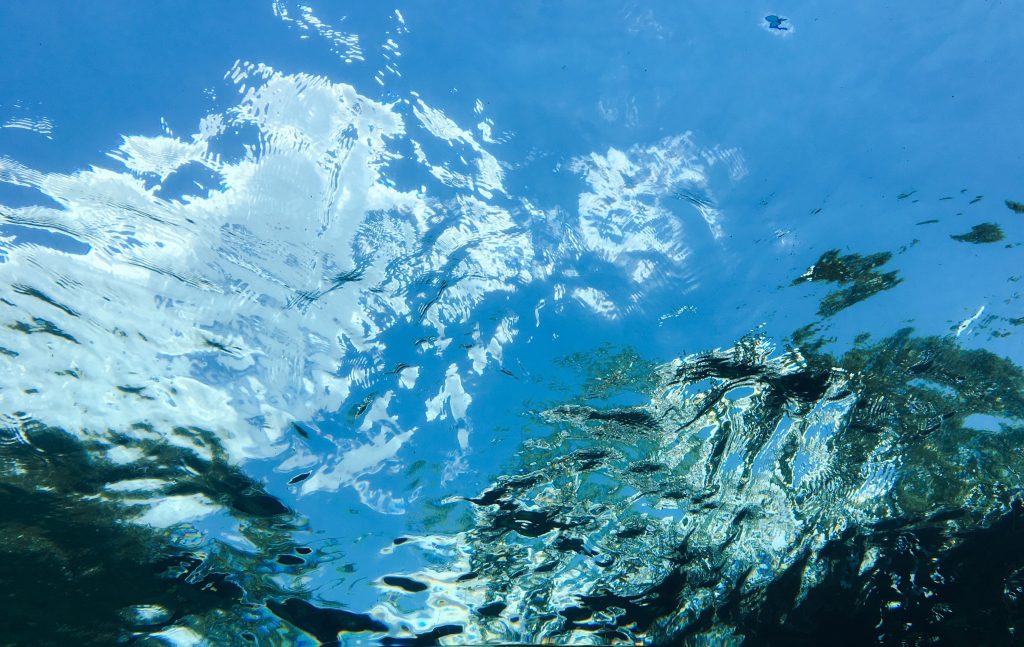 The entire book of Job is another example of poetic reflection on the problem of suffering. Proverbs and Ecclesiastes both reflect, in their own ways, on the good life.Report

Do the arguments contained in – say – Lucretius’ De Natura Rerum not count as part of ‘the poem itself’. If they don’t, then why not?Report

Of course poetry can be philosophical in the generalized sense of argument as making a point and supporting it. Such points in poetry can even reflect the differences between general and particular conclusions: respectively contrast the points of Frost’s “The Road Not Taken” and Plath’s “Daddy”, despite their common use of the first-person speaker. Usually such differences are taken to be that of (say) didactic versus confessional poetry, but one could easily as well take them as presenting evidence for universal and particular truths–though of course any particular truths like that of “Daddy”‘s have wider credence. After all, the measure of the success of poetry and philosophy is by the common factor of connecting with readers. I’ve loved poetry and philosophy all my life, and always viewed them as something like fraternal twins–sometimes quite different, but birthed by a common mother of invention.Report

Academic philosophy is rife with authors who tend either to dismiss or to ignore the significance of the way they describe things. When you describe something in one way rather than another, you prepare your subject matter for uptake into one path of reasoning rather than another; when you conceptualize your subject matter in a certain way, you invoke and rely on one suite of similarities rather than another. How does your thinking proceed when you begin your essay by describing a particular being as a fetus instead of a child, or vice versa? I can see how reading and being moved by poetry might draw attention to the important functions that describing and conceptualizing perform prior to all the macho forensic displays.Report

Bertrand Russell, brain of muscle
With mathematics had a tussle
That it was logic prolongated
PM he thought had demonstrated
But alas it would not do
For non-logical axioms were needed tooReport

Published:
June 18, 2014
By Columbia Journal
Poetry
POETRY – 3 Poems by Merilyn Jackson
Haboob
The possible ranks higher than the actual.
—Martin Heidegger
Tout de même
the desideratum of
the golden glove,
the idiocy of my love—
our love, were it to occur—
the song of it echoing across bridges,
between banks of river gorges,
carried along in barges, aloft sine waves,
tunneling through mountains,
plummeting down canyons for millennia,
bruising grasslands
and
burrowing into all the libraries of the world
forgotten about through the ages,
unearthed by sages to deride and malign
and yet marvel—
marvel at our dasein.
—
Empty Spaces
It’s in the emptiest of spaces
that I am most with you
and you with me.
That long moment that erases
the memory of
each other’s faces.
The time our voices are forgotten
our touches unbegotten.
There the whispers.
There the shadows.
There the shudders’ final traces.

If only you would come to me
there, in those empty spaces
you would fill the moon
in all its gloomy phases.
You would fill it with silly questions:
Why do women want to be blonde?
I hate Doris Day, don’t you?

You, the fixed, sardonic sign,
inspirer of my fire,
groom your mystique,
defend your lair.
Better Beans and Bacon
in peace.
Because thou art so virtuous
you give rise to my defeat.

The umbra of the moon,
like virga that does not reach
the earth in Arizona,
does not darken radiant Gemini.

For even on twelfth night
she remains pale,
eating your words
like Cakes and Ale.
—
Words
Poetry is the universal art of the spirit which has become free in itself and which is not tied down for its realization to external sensuous material; instead, it launches out exclusively in the inner space and the inner time of ideas and feelings.
—Hegel
When word does not become flesh
I settle only for your words.
Sparse as they are,
they fill my being if not my belly—
keep me from starving.
No doubt, Shakespeare knew
words are neither white nor black
but loaded, colored—more often—blue.
They don’t come easy and aren’t cheap,
they defy your fascination with that low-brow hack.

If every moment is necessary
your heart is everywhere,
but, like you, shaded grey
unseeable even though
I am purely looking in every way.

Each corner of my house
inhabited by your geist.
Where is the finger, the hip or thigh
where my hand might linger,
warmed from feeling despised and iced?
At the onset of dusk
fly to me and with howl and hoot
swell our beings with lust
till our voices grow hoarse or mute
and you steal off in dawn’s dust.
The rule of life is change,
whether tragedy or farce,
so send me words
however brief,
that I may be content to verse.

There is the collection of poetry “The Plurality of Worlds of Lewis” by Roubaud; I am not sure if this counts as good poetry or not (this would be taste-dependent presumably) but it definitely has a philosophical character and is intended to explicitly address Lewis’s work.

There you go. My recent, book-length poem, and the first ever (at least in English, by a single poet on a single topic) to treat of mathematics and poetry.

The amount of ignorance expounded by some philosophers (but by far fewer mathematicians, note) on the subject of poetry is breathtaking.
Maybe start with “Poetry and Mathematics”, Scott Buchanan’s masterful series of lectures at the Cooper Union as far back as 1929 (which contributed to expanding the famous Core Curriculum at Columbia University).Report

Yes, my friend Jet Wimp, long a mathematician at Drexel, is also a fine poet