It is National Poetry Day in the UK and Ireland.

There are some contemporary philosophers who are also poets—successful, well-published, and acclaimed poets. It strikes me as an unusual combination, and an impressive one at that, as the kinds of linguistic skills and stylistic sensibilities that these literary endeavors require seem so different.

In recognition of National Poetry Day, I asked a few philosopher-poets to share some of their poetry to mark the occasion. They are Troy Jollimore (CSU Chico), John Koethe (University of Wisconsin – Milwaukee), and Brook J. Sadler (University of South Florida). Thank you, poets!

I encourage you to check out their other work. 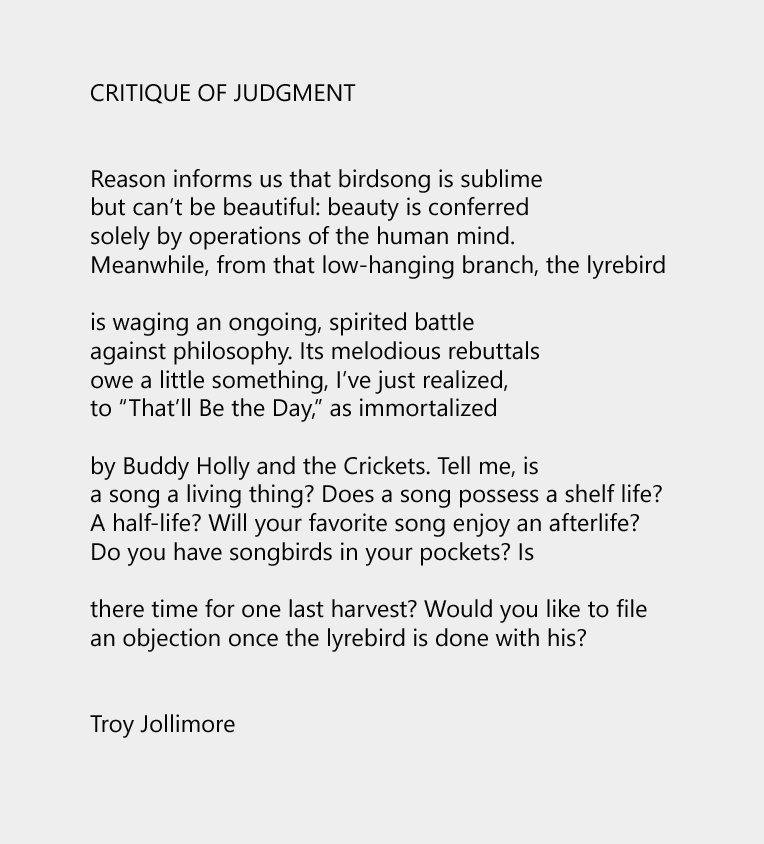 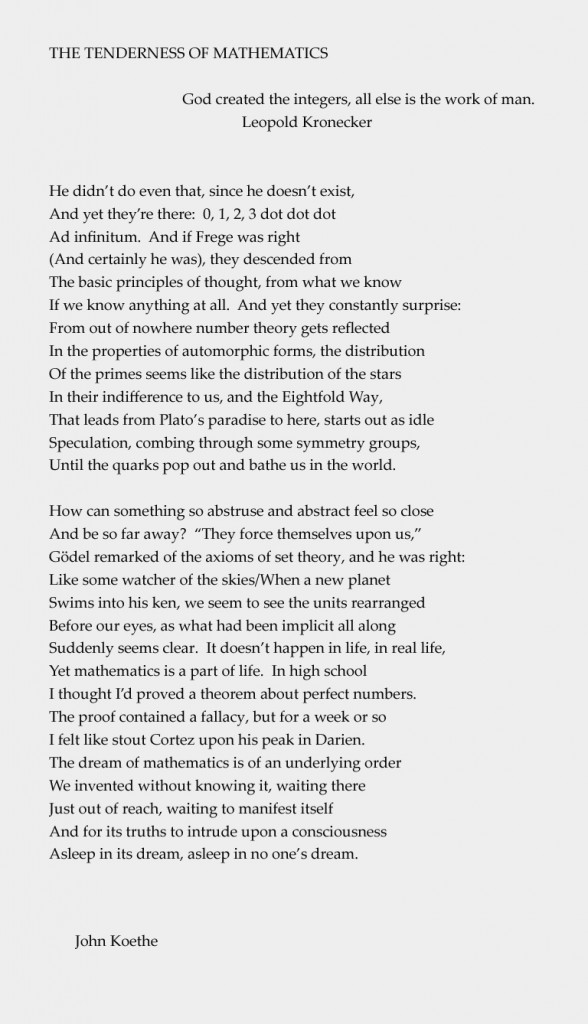 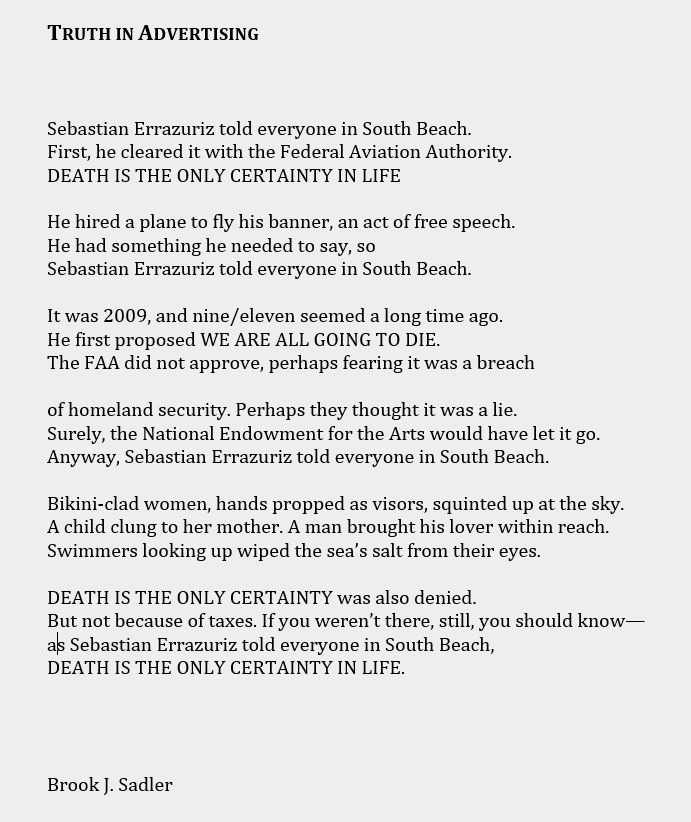 (“Truth in Advertising” first appeared in The Cortland Review) 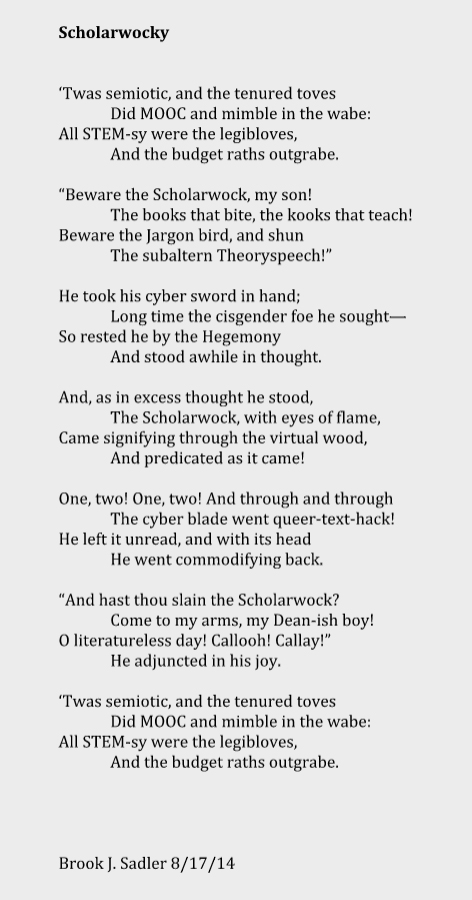 Glad to see Troy Jollimore getting a nod — here’s another of his that I’ve always liked.

I’d like to take back my not saying to you
those things that, out of politeness, or caution,
I kept to myself. And, if I may—
though this might perhaps stretch the rules—I’d like
to take back your not saying some of the things
that you never said, like “I love you” and “Won’t you
come home with me,” or telling me, which
you in fact never did, perhaps in the newly
refurbished café at the Vancouver Art
Gallery as fresh drops of the downpour from which
we’d sought shelter glinted in your hair like jewels,
or windshields of cars as seen from a plane
that has just taken off or is just coming in
for a landing, when the sun is at just the right angle,
that try as you might, you could not imagine
a life without me. The passionate spark
that would have flared up in your eye as you said this—
if you had said this—I dream of it often.
I won’t take those back, those dreams, though I would,
if I could, take back your not kissing me, openly,
extravagantly, not caring who saw,
or those looks of anonymous animal longing
you’d throw everyone else in the room. I’d like
to retract my retracting, just before I grabbed you,
my grabbing you on the steps of the New York
Public Library (our failure to visit
which I would also like to recall)
and shouting for all to hear, “You, you
and only you!” Yes, I’d like to take back
my not frightening the pigeons that day with my wild
protestations of uncontrolled love, my not scaring
them off into orbit, frantic and mad,
even as I now sit alone, frantic and mad,
racing to unread the book of our love
before you can finish unwriting it.Report

I don’t know if he’d call himself a poet, but he’s a lot of fun to be around.Report

As his grad student and friend, I was there during the creative process. He was indeed fun–and very inspiring. I owe him a lot.Report

For fun, I am writing an A-Z of philosophy in rhyme, in case anyone is interested:
http://philosophypoems.weebly.com/an-a-z-of-philosophy-in-poetry.htmlReport

Rachael Briggs (Stanford) won the Thomas Shapcott Award for her poetry book _Free Logic_. There’s a video of “Waiting for David K Lewis” on Youtube, and some other poems can be found here.Report

I second Dan’s comments on Jollimore. Also, Justin, I think that poetry and philosophy often pursue the same ends through different means. Seamus Heaney doesn’t say this, explicitly, in “The Redress of Poetry,” but with minor qualifications his ‘defense’ of poetry can be adapted as a ‘defense’ of philosophy.
Actually, I’ve long felt that, by merely swapping the terms, the narrator in Marianne Moore’s “poetry” nails how I feel about Philosophy.

Poetry
I, too, dislike it: there are things that are important beyond
all this fiddle.
Reading it, however, with a perfect contempt for it, one
discovers in
it after all, a place for the genuine.
Hands that can grasp, eyes
that can dilate, hair that can rise
if it must, these things are important not because a

high-sounding interpretation can be put upon them but because
they are
useful. When they become so derivative as to become
unintelligible,
the same thing may be said for all of us, that we
do not admire what
we cannot understand: the bat
holding on upside down or in quest of something to

eat, elephants pushing, a wild horse taking a roll, a tireless
wolf under
a tree, the immovable critic twitching his skin like a horse
that feels a flea, the base-
ball fan, the statistician–
nor is it valid
to discriminate against “business documents and

school-books”; all these phenomena are important. One must make
a distinction
however: when dragged into prominence by half poets, the
result is not poetry,
nor till the poets among us can be
“literalists of
the imagination”–above
insolence and triviality and can present

for inspection, “imaginary gardens with real toads in them,”
shall we have
it. In the meantime, if you demand on the one hand,
the raw material of poetry in
all its rawness and
that which is on the other hand
genuine, you are interested in poetry.Report

Some wonderful poems! Please share more. I will share one, that is not wonderful, but Brook’s “Scholarwocky” reminded me of my attempt to adapt the Runny Babbit books to discuss the free will debates:

Runny Babbit chose, he thought,
to read about wee frill.
He’d heard that philosophy
could be thrite a quill.
He tried Veter pan Inwagen,
but was unable to trender it rue.
He then read Frarry Hankfurt,
without really wanting to want to.
Wusan Solf drove him crazy.
Is JoJo mad or bad or lust jazy?
Next up was Reedom and Fresentment
by elder Streter Pawson.
Runny lorgave him for its fength,
since he thought it pretty awesome.
He then read the son Galen,
who says it’s all just a latter of muck.
Runny decided silosophy phucks,
and most silosophers phuck.Report

Our eye-beams twisted, and did thread
Our eyes, upon one double string.
—John Donne

blood in my eyes for you
—traditional

No one comes here anymore.
I have a token NO
I have an idea NO
I was washed up

on a lab table, in the traditional
manner. “Everybody wants
to say the joyful joyfully, and I
finally saw it, when I was destroyed.”
Talk all you like, you’re already dead.

Mary, would you like to come outside?
Mary worked so long and hard
In the palace of black and white.
Mary knows things I don’t know.
She knows every tear I’ve cried.
She gave her life to seeing sight.
Mary, Mary, when will you come outside?

Well, we have these instruments

Individually a vision, a vision
Individuate. You manx.
“Yeah, it’s that paper that lights up
When you look at it.” But why did
The ground start moving? Catch up.
She knew it was happening before
It started to happen. Catch up.
“What did you do, pay for
Those eyes?”

Opaque: the rose is not red until your eyes fall upon it.

Translucent: the rose is not red until your eyes.

Transparent: the rose is not red.

Etc. Look, the story concerns Mary, and Mary alone. Mary
alone in her colorless tower.
Snow will fall, day turn to night, and not even postmen evade
her sight,
Lidless, fulfilling the ancient dream, she sees the tanks roll
into Gaza
And dieters, she sees with all-encompassing eyes the shredding
of orders,
Kids sneaking into The Story of O, the football scrimmage, and
Manhattan
Ending, she sees the end of Paris and Fort Worth, she watches
subways melt
Sleeplessly, she knew how it all would work out, she trains her
dials on the death
Of kings sitting sadly by the waterfront shacks, she sees
beyond the genius
Of Edwards Teller, Hopper, and Lear. You and I are the trouble
she’s seen.

Mary, Mary, when will you come outside?

The community got together, as communities will,
And waited together for death. Some of us
Were colorblind, so when they lifted the red flag
To signal the drink, we had to be prodded
By neighbors. In a couple of cases,
There were clusters of the colorblind, after all
A genetic trait: these familial bands
Required repeated prodding by strangers
On the outskirts. It produced a wavelike pattern,
All this prodding, so that to an outside observer,
One tuning in from remote satellite, for example,
It was reminiscent of a Busby Berkeley scene,
Or one of those marching band routines
In which the scrambling about of the sousaphone players
Suddenly blossoms into a starfish or some kind of
Risqué joke. But within fifteen minutes or so,
The prodding subsided, and after that the drinking,
The twitching, and we all lay dead in the field.