Administrators at the University of Wisconsin-Superior surprised their faculty this week with news that they were “suspending more than two dozen academic programs,” according to the Chronicle of Higher Education. Remarkably, given all the times we’ve seen philosophy programs threatened over the past few years, the philosophy program at Wisconsin-Superior survived this round of cuts unscathed.

Both majors and minors across the school have been suspended “effective immediately.” 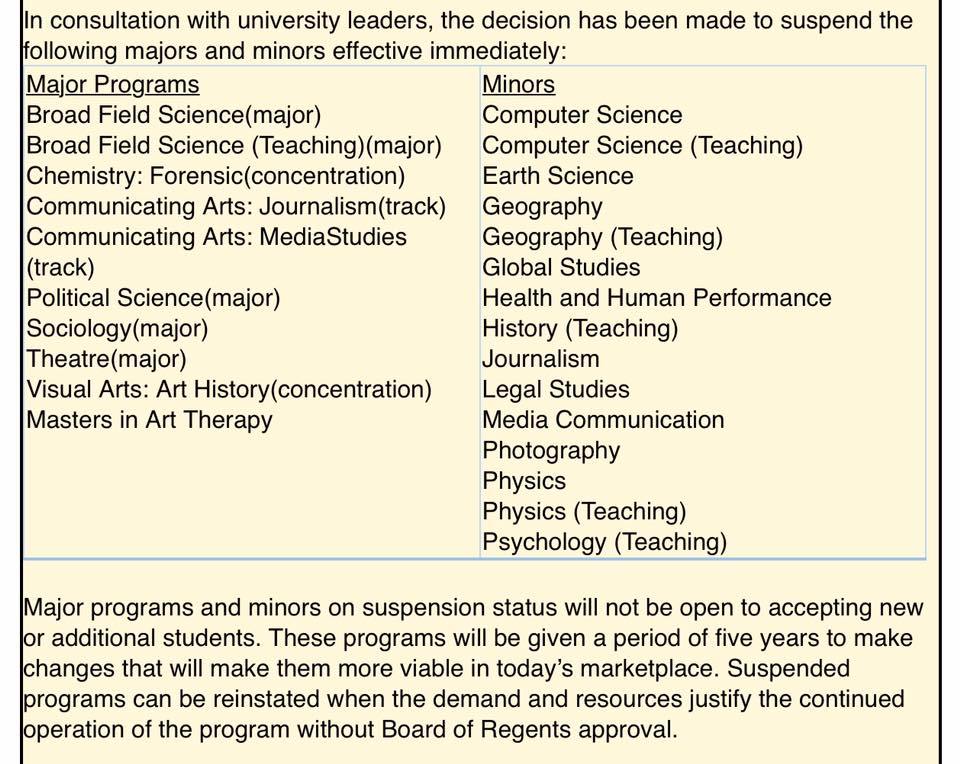 I reached out to Sarah LaChance Adams, a philosophy professor at the school, to learn more. She told me that as far as she knows, there has never been a philosophy major offered by the school. Philosophy there is grouped administratively in the Department of Social Inquiry, which lose its political science and sociology majors, and a history minor, under this new plan.

How did the philosophy minor survive? Professor LaChance Adams, noticing that her university is pushing for more online content, created an online philosophy minor (one of a small number of online minor programs), making philosophy more valuable to the school. She writes, “if they were to eliminate the on-campus minor, the online minor would have to go too.”

It’s also the case that philosophy courses have been integrated into other programs as part of a survival strategy. “Five of my courses are part of 6 other majors,” La Chance Adams says. Additionally, she teaches a number of high-enrollment general education courses, and even raised the caps on them in order to improve her value to the university, enrollment-wise.

While these efforts have helped preserve philosophy at Wisconsin-Superior, the process that led to these cuts apparently had little faculty input, and there have been reports that the administration shared the news of them with media outlets before telling their own faculty and students. The direction of the school appears to be one in which liberal arts programs, if they’re preserved at all, do so in order to serve the more vocationally-oriented majors.

“These programs will be given a period of five years to make changes that will make them more viable in today’s marketplace.”

So education is just another commodity in the “free” market.

Gross. (And it’s happening everywhere, and it’s been happening.)Report

My thoughts exactly. Perhaps they should drop “University” from their name if they intend to stop being one.Report

While I share much of the sentiment behind your reaction, there’s at least a little bad faith in insisting that we the faculty get paid a living wage to teach these subjects while we decry treating education as a market commodity. After all, the closing of a humanities program does not prevent humanities professors from teaching in the streets, in community centers, etc.Report

“After all, the closing of a humanities program does not prevent humanities professors from teaching in the streets, in community centers, etc.”
Most of us do that already, often for free.Report

This comment isn’t about UWS, but a general question:

There are plenty of universities out there with small philosophy departments that have few to no students, no majors, and which produce almost no research. Shouldn’t some of those close? Are we really so confident in the value of philosophy that we have to reflexively oppose every departmental closing?

You might say, “Ah, but almost every university wastes money on admin bloat, so they could keep philosophy open by cutting unnecessary administrators.” True, but suppose they freed up money by cutting waste. If you have a department with no students and little research, why keep it open? Why not close it too, and use the savings elsewhere, say for scholarships for low income students?

You might say, “Sure, but people *should* study philosophy!” Perhaps, but if they don’t and won’t, why keep tiny and unproductive programs afloat?Report

I’d be curious to see these departments. If they aren’t teaching or researching, what are they doing?Report

Most public universities are not wasting money on administrative bloat, at least by historical standards, and knowing what I do about the UW system, I’d be very surprised if UW Superior is! Low enrollment programs are unfair to the students who enroll in them. A substantial part of someone’s education is being among peers with whom they can study, argue, discuss, and learn. And they need to have a diverse care portfolio — a number of professors so that if they cannot get along with/learn from/connect with one, there are others they might be able to get along with/learn from/connect with. And the UW’s like Superior are under intense financial pressure right now. So, yes, higher education is part of a marketplace, and it always has been (well, secular higher education always has been).Report

Ben
Reply to  harry b

“Most public universities are not wasting money on administrative bloat, at least by historical standards,”

Then why do they cost so gosh darn much for students? Is it all going to construction?Report

One reason is that public support for public colleges and universities has done way down in recent decades, so the proportion of expenses that is covered by tuition dollars is higher. Here is one study just about funding from the time of the recent recession: https://www.cbpp.org/research/state-budget-and-tax/funding-down-tuition-upReport

harry b
Reply to  Ben

In fact government support has held up pretty well. It is per student state support that has declined. We are teaching more, less qualified, students than we used to, and that costs money (and needs administration — student services such as advising are more necessary for first gen students). Federal funding has increased, mainly via tax breaks, and 529s, which disproportionately benefit the affluent thus driving up the price of more selective institutions (public and private). And… at selective institutions faculty teach less (probably a lot less) than they did, say, 40 years ago.Report

But I also want to second Clement’s comment. And it sounds as if part of the reason for Philosophy’s survival at Superior is precisely that Prof Lachance Adams has taken seriously service to non-majors/non-minors.Report