The following is a guest post* from Andrew Higgins, who recently received his PhD in philosophy from the University of Illinois, Urbana-Champaign. He spent some time combing through data at the Open Syllabus Project (previously) and in the post presents some information that should be of interest to fellow philosophers. Thanks, Dr. Higgins!

Philosophy Data from the Open Syllabus Project
by Andrew Higgins

The Open Syllabus Project has collected data on which texts are taught in college courses in English speaking countries based on the information provided in over one million syllabi (see this NYT article for a summary). One can search through their syllabi and filter based on discipline, institution, state, country, or source. Searching for philosophy syllabi, you’ll see the most popular texts, going as deep into the 47,920 texts as you’d like. However, it’s hard to see the big picture wading through a list of thousands of authors and texts. Below, I’ve summarized what I’ve found from analyzing all texts which were assigned in three or more syllabi. I start by presenting the results, but note that these results should be taken with a grain of salt, for the reasons listed at the end.

As one can also find on the project website, these texts are most frequently assigned:

Ancient Greek philosophy appears to be overrepresented, but the ranking of texts can be a little misleading. For example, Heidegger’s book on Nietzsche is higher ranked than any of Nietzsche’s own works, but overall Nietzsche has been assigned almost twice as often as Heidegger (947 vs. 518). We should dig deeper and shift our focus to the list of most significant authors.

From an initial set of 70,393 assignments of 7,038 texts, I cleaned the data by merging duplicate or near-duplicate names, resulting in a list of 4,007 authors (the actual number is likely around 3,900, as co-authored items have not yet been addressed).  Below you can see the 20 most frequently assigned authors.

This list indicates that Ancient Greek philosophy is significant, but we also give attention to the Modern period and both Anglophone and Continental philosophers. It appears that non-Western philosophy is severely underrepresented. Only two non-Western authors, Confucius and Suzuki, are found in the top-200. In this same group of 200, 60.2% of post-Kant readings go to Anglophone authors, 35.4% to Continental authors, and the remainder to figures I judged to be neutral between the two (e.g., Darwin).

I then expanded the search to the top 1,317 entries (all with 10+ uses) and looked instead at the most used journals. From this set, the following journals are most often assigned:

This information could be valuable for department librarians deciding whether it’s worth purchasing access to a journal.

In my final analysis thus far, I categorized all 4,007 authors by number of represented publications, sex, and date of death. 74% of authors have only one text taught in this sample, 1% have more than ten, and Plato has 51 (various permutations of the dialogues). In the graph below, you can see how well each time period is represented. 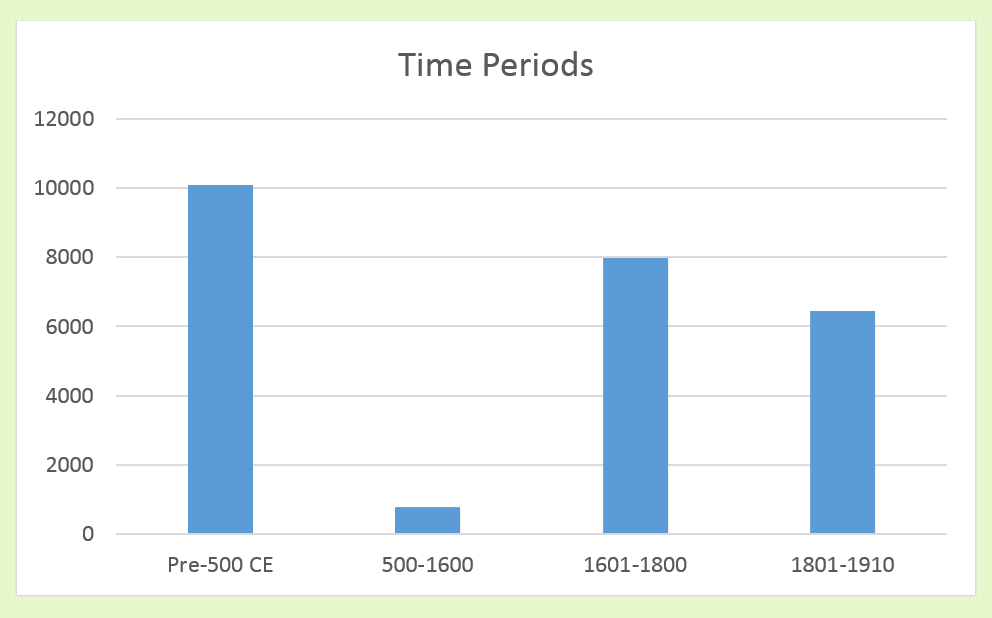 Not shown are the 45,104 assignments of texts published from 1911 to the present. In this graph you can see that, as a field, we largely ignore the medieval period. More worrisome, though, is how we are ignoring women. Of the 70,393 assignments given by the philosophers represented here, only 5,470 (7.8%) of those were assignments to read a female author. From Ancient up through the 19th century, only about 2% of assignments from each period were written by women. Of all texts written by authors who died after 1910, only 11.4% were authored by women.

The take home message, for me, is that we should consciously aim to better represent non-Western philosophers, female scholars, and pre-Modern thinkers other than Plato and Aristotle.

I don’t know whether this data is accurate. My original data consists of syllabi collected from the web; the sample set is large, so I don’t worry about the representativeness of their original information. However, I have only looked at sub-sets of that original data, with the largest sub-set being all texts with 3+ uses (7,038). That means I’m ignoring 40,882 texts used only once or twice. My set has 70,393 assignments, and the remaining 40,882 texts probably have at most around 60,000 assignments, so I can at least say that this data represents over half of all assigned texts in their database.

Even if these 7,038 texts are representative, my methods weren’t ideal. In sorting male/female, some names were removed because sex could not be determined within 1 minute of web searching, and I counted a text as 100% female even if only one of five co-authors were female. My judgments on Anglophone vs. Continental may have been off, as I only really know the Anglophone tradition.

Furthermore, we should remember that the numbers here are the numbers of texts assigned; since these records do not distinguish between a one page Analysis article and a three-hundred page book, we should be extra cautious in inferring any general conclusions about which figures and traditions are taught more frequently.

Automated processing is probably the way to go if one wanted to analyze the full set of 47,920 texts, but it has its downsides. Without some machine learning, you won’t get automated Anglophone/Continental breakdowns, and the entries don’t reliably show dates, so you can’t just rely on automatic date extraction. One could use scripts that sort based on sex, but they aren’t perfectly reliable, and you’d still have to manually check the names with abbreviated first names.

On the bright side, there’s low hanging fruit if one wants to further filter the data by institution or geographic locations. I’m planning to develop a network of text-demographic relations extracted from this data to see which institutions and regions are teaching what, but that’ll have to wait for another day.

If you’d like to see more, I’ve posted various other data-driven pictures of the field, here.

Does Aristotle have a text called *Ethics* I don’t know about, or is EN getting double-counted? I doubt people are assigning EE often enough to top the list.Report

My assumption is that “Ethics” refers to the Nichomachean ethics. No texts are double-counted, but many (especially the most taught texts) will go by different names depending on the instructor, which is why I wanted to take the time to combine those entries.
Some of the results are surprising, so a part of me also feels some doubt when I look at those surprising entries, but, ultimately, I trust the data they’re giving. In part, I trust it because I’m confident that the researchers working on the OSP don’t have a horse in the race of professional philosophy (only 5% of their entries come from philosophy), and the sample is so large that it’s hard to imagine that the highest ranked text isn’t widely taught.Report

I assume so, but I’m guessing as much as you are because I don’t have the original data, only what’s presented on OSP’s website.Report

I’m sure there’s a connection between the lack of diversity in the field and the lack of diversity in what we teach. If 92% of readings are of men, and 99% of the top-200 philosophers are white, I can easily see how a non-white male might feel like they don’t belong to the community.
I’d also pair this post with a couple more:
Schwitzgebel’s data on Ph.D.s given to women and minorities: http://dailynous.com/2016/01/13/percentages-of-u-s-doctorates-in-philosophy-given-to-women-and-to-minorities-1973-2014-guest-post-by-eric-schwitzgebel/
And, this info from the UP Directory on minorities: http://dailynous.com/2015/01/11/minorities-in-philosophy-data-visualized/Report

How could it be that “Heidegger’s book on Nietzsche is higher ranked than any of Nietzsche’s own works”? It’s ranked higher even than On the Genealogy of Morals, a staple of moral philosophy courses?Report

I wonder how representative the sample is that the Open Syllabus Project has. Perhaps certain professors are more likely to use syllabi that show up in their sample, and those are disproportionately Heidegger classes rather than Nietzsche ones?Report

It’s entirely possible that the original set of syllabi is not representative; but, in this set, Nietzsche is taught about twice as often as Heidegger.Report

The “take home message” does not follow straightforwardly from the data. To show that we should be more frequently teaching works that currently are rarely taught, one must say something about their merits.
I think that there are indeed some neglected works that we ought to teach more. For example, I think more courses on the history of social and political philosophy should teach Mary Wollstonecraft’s Vindication of the Rights of Woman. (It is important both as a work of feminist philosophy and as a response to Rousseau’s argument in the Second Discourse that division of labor leads to moral corruption.) But there are good reasons for Plato, Aristotle, and Kant to be taught more than any other philosophers.Report

The difference between Plato/Aristotle and everything else written before the modern era could be reasonably defended, as could the great attention given to figures like Kant, but I don’t see any excuse for grossly under representing entire philosophical traditions or largely ignoring women.Report

It seems a frighteningly narrow list, as if many philosophical decisions were pre-empted before the list was chosen.Report

There are around 4,000 authors total, and probably further more in the list of texts with only one or two uses. Here’s a longer list of the top authors:

Very interesting. May I ask which software was used for the search and analysis? Thanks.Report

I simply copied and pasted from OSP’s list of texts from philosophy course syllabi (link below). So, I only needed to use excel to determine these aggregated results.Report

Cool. Thanks for sorting through this.

That’s right, and a fair criticism of my labels. I avoided saying “analytic” because it’s contentious, and this let me categorize contemporary figures as anglophone based on their position in the social network even if they aren’t exactly analytic philosophers in terms of their methodology. Figures like Darwin, who aren’t deeply embedded in any philosophical tradition, may be from England or continental Europe, but it seemed misleading to identify them with either group for the purposes of reporting who we’re teaching.Report

Where’s Cicero?
There are two kinds of people: those who place Cicero second only to Plato, and those who haven’t read Cicero’s philosophical works.Report