The “Cogtweeto Philosophy Workshop Series” aims to bring together philosophers who are active on Twitter (a growing group—see below) to discuss their philosophical work in contexts more suitable for doing so than Twitter. 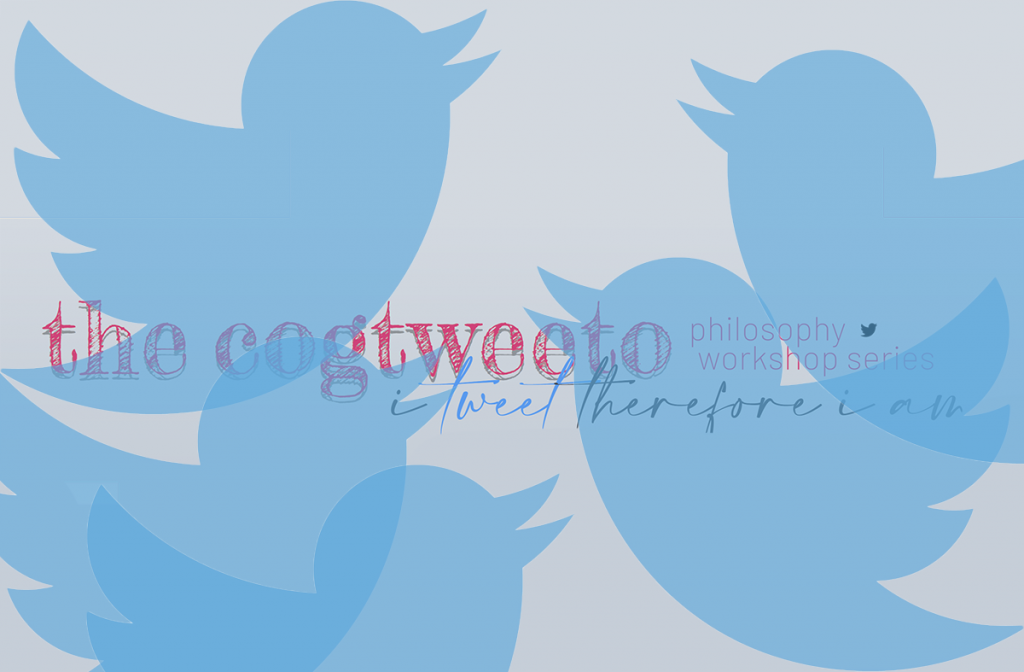 The series will take place on Saturdays, once every six to eight weeks, over Zoom. In the first, taking place on January 30th, “Philosophy Twitter will teach us about a philosopher or philosophical tradition that most of us (probably) don’t know—but should.” It will have three different kinds of sessions. The first is similar to a traditional brief conference talk with a commentator, the second is an informal hour-long “coffee hour” talk about a work in progress or idea in development, and the third is an hour long lecture presentation followed by discussion.

I asked them about the motivation for the workshop and how the idea developed. They wrote:

Twitter has become a thriving community for philosophers to interact and get to know one another, but it’s been largely limited to social interaction. Scholarship is more or less limited to the occasional link to a published paper, as opposed to more serious engagement. Jen Foster had the idea to host a Twitter philosophy conference so we could expand the scope of the Twitter-philosophy community’s interaction to incorporate more scholarly activity. Part of the motivation is to expand access to conferences to philosophers who, for myriad reasons, do not have easy access to philosophy conferences, to help graduate students get experience in a low-pressure conference environment, and to encourage philosophers who already know one another to engage not just socially but philosophically with one another’s work.

Cassie Finley volunteered to help Jen with the organization, at which point it became apparent that a workshop series with multiple styles of presentations would better facilitate those ends than a traditional or workshop-style conference. We opted for a series of workshops, held on a Saturday every 6-8 weeks, each surrounding a particular theme, with three different talks per workshop.

The sessions will be hosted over Zoom. Because these are intended to be opportunities to practice in a lower-pressure environment than the usual academic conference, we’ve decided not to record the sessions. Part of the reason for this is that recording can add an additional layer of stress which may discourage individuals from sharing their ideas in the questioning periods, and it may discourage others from submitting to present in the first place. Similarly, because we want this to support students and early-career scholars, having a recorded presentation on the internet for all to see raises the stakes and could have further reach than the more comfortable, discussion-based environment we want to promote.

We also realized that for many people, and for many different reasons, traditional conferences can be inaccessible—but philosophy can, and should, be done in so many other spaces. For instance, even in the traditional conference setting, often some of the best conversations are had after APA talks because someone saw another’s talk and is able to speak with them afterwards in a more comfortable, social setting. The built-in social dimension of Twitter allows for that social interaction; but without a venue of some kind to present work to one another, philosophers on Twitter seems to be missing out on the opportunity to interact with one another’s work.

Our hope is that this workshop series can be a platform for expanding networking and feedback opportunities for those who may not have access or experience doing so. That being said, Cogtweeto workshop attendance is not limited to those who are already on Twitter. We built the conference around Twitter because there is already lively engagement between philosophers in a social setting, so building from that seemed pretty natural. As it stands, because we want the close integration of social interaction and philosophical engagement, we’ve decided to limit submissions to those who are on Twitter.

Philosophy Twitter has seen an acceleration in growth over the past two years, according to Kelly Truelove (@TrueSciPhi), who, among other things, tracks Twitter- information related to philosophers, scientists, and mathematicians at his site, TrueSciPhi. He recently noted that there are now more accounts with over 10,000 followers than there were accounts with over 1,000 followers when he began tracking this information in 2013: 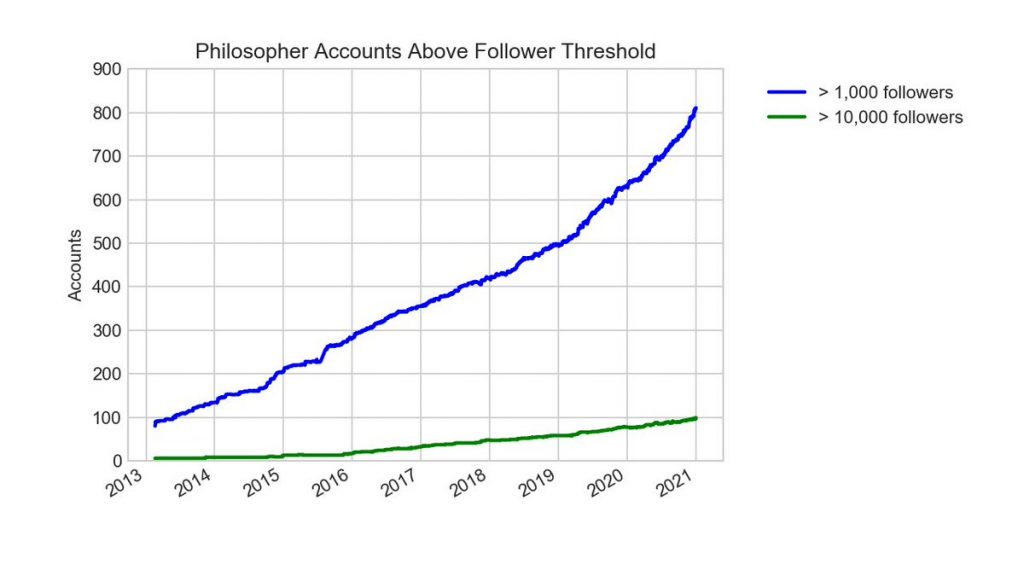 For those interested, Ms. Foster and Ms. Finley provided some additional information about the types of sessions:

The first talk is a traditional ‘APA-style’ talk, which requires a 3,500-word paper submission and will include a commentary on the paper. This session is intended for graduate and advanced undergraduate students, post-grads, independent scholars, and early career faculty. Our hope is for attendees to see what an APA-style talk is like, since many undergraduates and graduates have not had, and potentially do not have, the opportunity to attend the APA, while also giving the presenter an opportunity to practice giving that form of talk with a commentator and audience, as that setting is not easily experienced otherwise. The second talk, the ‘coffee hour’ talk, is more workshop-style; as we describe it on the website, we hope that it is more like a conversation among participants about a paper in progress than a traditional-style “talk.” Grad students, adjuncts, early career faculty, and independent scholars are encouraged to submit to this session as it’s more geared towards workshopping the early stages of an idea and getting feedback from others. The last ‘colloquium’ talk is geared primarily towards late-stage graduate students, post-docs, and adjuncts, as it’s intended to be a practice opportunity for an hour-long job talk. Many grad students enter the academic job market with little-to-no experience preparing for, let alone actually giving, such a long presentation. There are also few opportunities in grad school to practice fielding an hour-long Q&A. While this will be the most formal of the three talks, we hope that it still feels fun and “low-stakes.”

The deadline for submissions for the first workshop is January 10th. You can learn more about it here.

Noooo, I beg. Philosophers should just leave Twitter for good.Report

Thank you so much for sharing this, Justin!! If anyone has additional questions, please feel free to shoot us a twitter DM at @CogtweetoSeries, or send us an email at [email protected]!

And please, do consider submitting!! Our first workshop, “idk who needs to hear this, but…” will include three talks on philosophers or philosophical traditions that have been underrecognized/underappreciated by mainstream (Western, analytic) philosophy. The workshop will be Saturday, January 30th, and the submission deadline is January 10th!! As Justin said, you can learn more about it here: https://www.cogtweeto.com/idk-who-needs-to-hear-this-butReport

This was a really nice, comfortable event — thanks and congratulations to the organizers and all the speakers!Report