The American Philosophical Association (APA) today released a new report, “State of the Profession 1967-2017 and Beyond: Institutions and Faculty.”

The report, drafted by Debra Nails (Michigan State University, emeritus) and John Davenport (Fordham University), “gives a detailed picture of the profession of academic philosophy—that is, the makeup of philosophy departments and philosophy faculty in North America—and how it has evolved over five decades.”

Its information comes from past editions of the Directory of American Philosophers published by the Philosophy Documentation Center (PDC) and other data from the PDC, the National Center for Education Statistics (NCES), the APA, and departmental sites.

The report, its authors say, “provides more detail on the state of the profession than has previously been available, including more specific information on gender, institutional types and affiliations, and regional differences among philosophy programs” and “explores the types of institutions that teach ad hoc courses and those that offer degrees, identifying where faculty in contingent positions are most concentrated, and where women philosophers are most concentrated.” It also provides information on the types of positions philosophy professors hold. 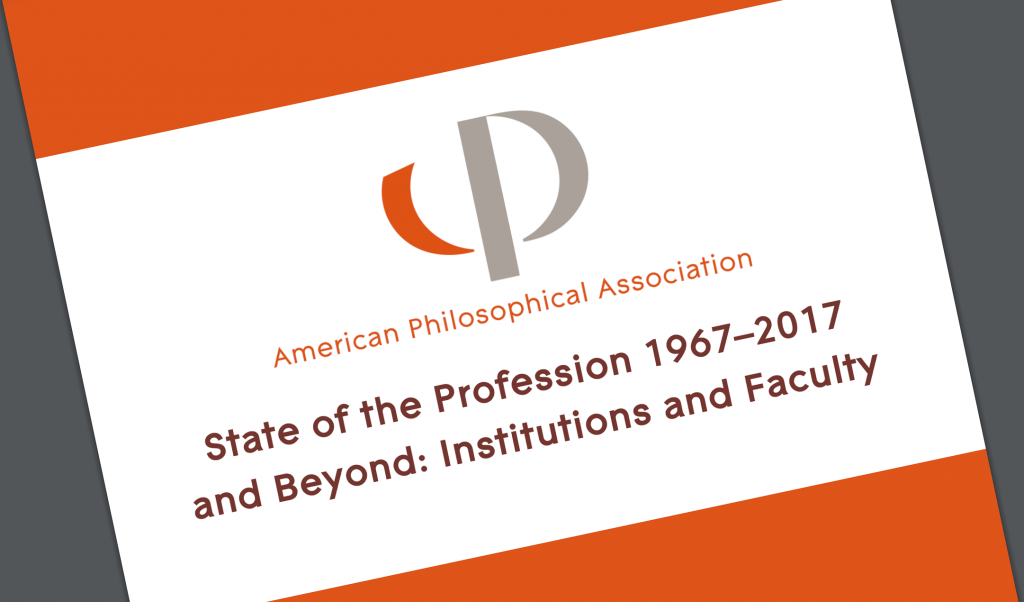 Some Good News, Some Bad News in the APA’s State of the Profession Report
by Carolyn Dicey Jennings and Eric Schwitzgebel

We were recently provided with a report from the APA that recounts work by Debra Nails and John Davenport to collect, organize, and analyze available data on the discipline over the past 50 years, including data from the Philosophy Documentation Center, the National Center for Education Statistics, and the APA itself. We are grateful for the efforts of Nails and Davenport in creating this important report on the state of the profession. As colleagues on the Data Task Force, we have some insider knowledge of how challenging this task was, and how much time it required between 2016 and now. In reviewing the report, a few threads stood out: good news, bad news, and supporting news. Let’s start with the good.

While some use the language of “adjunct” or “part-time” faculty, we follow the report in using “contingent,” since it is possible for adjunct and part-time positions to be permanent ones. The national issue of increasing contingent labor in academia has come up many times at the APA Blog and Daily Nous, and there was recently an APA session dedicated to the topic. As one report puts the problem:

For many part-time faculty, contingent employment goes hand-in-hand with being marginalized within the faculty. It is not uncommon for part-time faculty to learn which, if any, classes they are teaching just weeks or days before a semester begins. Their access to orientation, professional development, administrative and technology support, office space, and accommodations for meeting with students typically is limited, unclear, or inconsistent. Moreover, part-time faculty have infrequent opportunities to interact with peers about teaching and learning. Perhaps most concerning, they rarely are included in important campus discussions about the kinds of change needed to improve student learning, academic progress, and college completion. Thus, institutions’ interactions with part-time faculty result in a profound incongruity: Colleges depend on part-time faculty to educate more than half of their students, yet they do not fully embrace these faculty members. Because of this disconnect, contingency can have consequences that negatively affect student engagement and learning.

So far this sounds like bad news, but we want to be sure that we do not overlook the real issues contingent faculty face in communicating the good. Namely, that the percentage of contingent faculty in philosophy is low and stable. As Nails and Davenport explain, around 73% of all faculty nationwide are in contingent or “unranked” positions, whereas only 22% of philosophy faculty had contingent positions in 2017. Moreover, there is a lower percentage of contingent philosophy faculty now than there was in the 1960s. While the APA membership numbers have suggested this for some time (with around 20% of its members reporting contingent status), a reasonable concern about that estimate was that contingent faculty might be underrepresented among APA members. This new report suggests that the numbers just are low in our discipline. That’s good news, under the plausible assumption that it is best for the discipline if a large majority of faculty are tenured or tenure track.

While we are heartened by these findings, we see a couple of reasons to stay vigilant about the status of contingent faculty.

First, we don’t know the reason that there are fewer contingent faculty in philosophy. It may be, for example, that philosophers are less likely to teach the types of courses that are typically offered to contingent faculty, such as general education and writing courses. In that case, this wouldn’t be a reason to celebrate philosophy’s success on the issue. 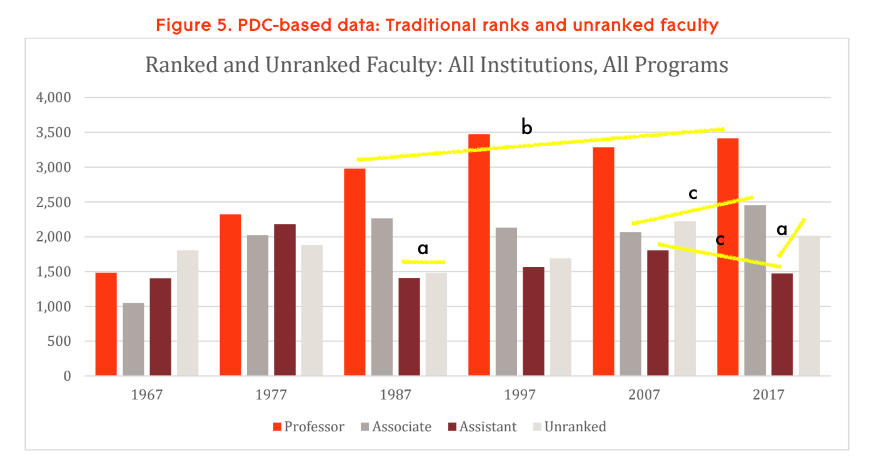 It is unclear what we should conclude from this, since the overall ratio of contingent to non-contingent faculty hasn’t really changed: there are also nearly 500 extra professor and associate professor positions since 1987 (“b” in Figure 5). This could be due to faculty staying in the profession for longer than in past decades, but it could be for some other reason. Zooming in on the difference between 2007 and 2017, Nails and Davenport note that “the drop in assistant professors and rise in associate professors may indicate a decline in entry-level hires since 2007. Universities that hired new faculty into contingent positions in the wake of the Great Recession have not yet made tenure lines available to those who, under normal circumstances, would have been hired as assistant professors.” But here, too, the additional numbers of those in associate and professor positions could explain the difference (“c” in Figure 5). It may be, for example, that those in more recent years are achieving promotion faster than in past years, leaving fewer people at the assistant rank relative to ranked positions, overall. So it is unclear what to take from this data, but we may want to be cautious, given the possibility Nails and Davenport raise.

Alright, how about some bad news?

The bad news is that philosophy is represented at about 100 fewer institutions in 2017 than in 1967 (1669 colleges and universities in 1967 and 1552 in 2017). This appears to represent a decline of the discipline in academia that has been the subject of numerous blog posts.

In addition, a striking 78% of historically Black colleges and universities (HBCU) offer no philosophy degree. Given the historical racism in philosophy, it seems likely that this is also connected to cultural issues. It would be in the interest of philosophy to further explore the  matter. (Interested readers might start with this interview with Brandon Horgan at Howard University, an HBCU.) 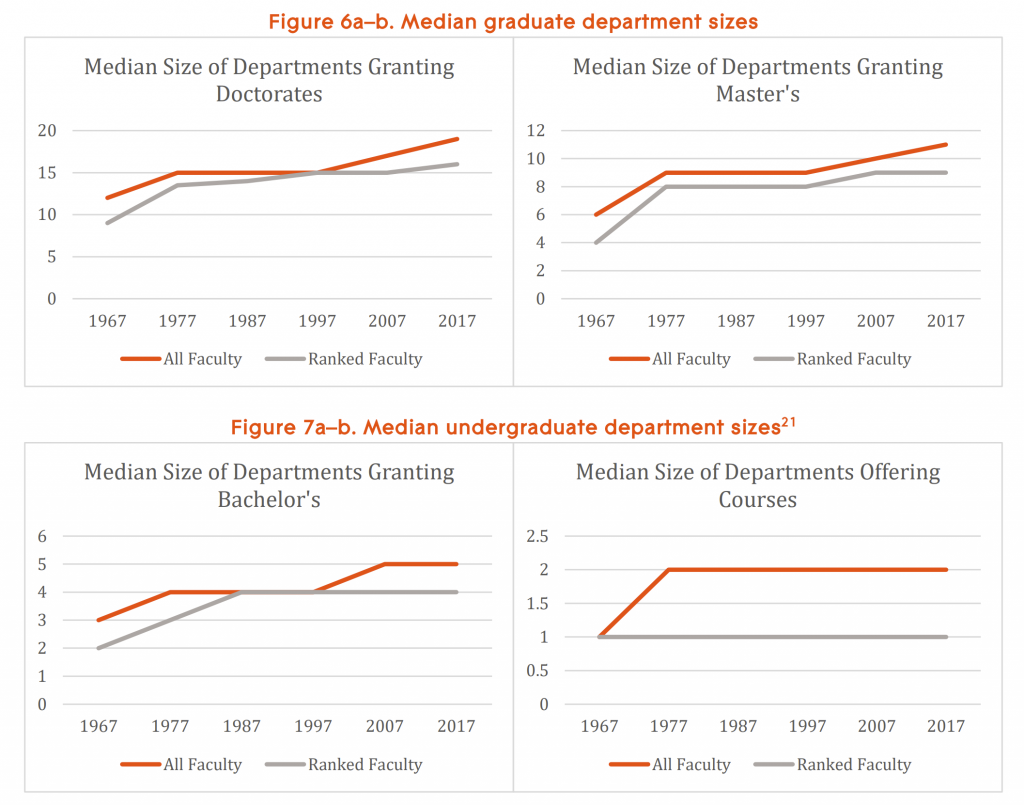 The report also provided some numbers that support other findings, which we called “supporting news” above. We focus here on the supporting news regarding gender diversity. (The authors of the report were unable to explore race/ethnicity, disability, LBGTQ status, or other aspects of diversity.)

The APA now collects some demographic data from its members, including gender, race/ethnicity, LGBT status, and disability status. Among the 1874 APA members who reported gender, 505 (27%) answered “female”, 1363 (73%) answered “male”, and 6 (<1%) answered “something else.” Other recent research has suggested that women constitute about 30% of recent philosophy PhDs and new assistant professors in the U.S., about 20% of full professors, and about 25% of philosophy faculty overall (plus or minus a few percentage points). However, most of this previous research is either a decade out of date or is limited to possibly unrepresentative samples, such as APA member respondents, faculty at PhD-granting programs, or recent PhDs.

The current report finds generally similar numbers, in a larger and more representative sample (all faculty in the Directory of American Philosophers from 2017). Overall, 26% of philosophy faculty were women, including 34% of assistant professors and 21% of full professors. (Associate professors and contingent faculty are intermediate at 28% and 26%, respectively.)

We note that the authors of the report relied on the DAP’s binary gender classifications of faculty, which were generally reported by department heads or other department staff. And where faculty gender was not specified, the report’s authors searched websites and CVs for gender designations. Thus, the data do not include non-binary gender and some classification errors are possible.

The tendency for women to be a smaller percentage of full professors than assistant professors could reflect either a cohort effect, a tendency for women to advance more slowly up the ranks than men, or a tendency for women to exit the profession at higher rates than men. On the possibility of a cohort effect, since professors often teach into their 70s, the lower percentage of women among professors might to some extent reflect the fact that in the 1970s and 1980s, 17% and 22% of philosophy PhDs in the U.S. were awarded to women. By the 1990s, it was 27%, which is closer to the numbers for recent graduates. However, cohort effects might not be a complete explanation, since 21% might be a bit on the low side for a group that should reflect a mix of people who earned their PhDs from approximately the 1970s through the early 2000s. In the NSF data, women received 23% of all philosophy PhDs from the year 1973 through 2003—the approximate pool for full professors in 2017.

Editorial note: readers may also be interested in the report’s data concering the number of graduate and undergraduate programs in philosophy, represented in Figures 11a and 11b, below. Nails and Davenport write, “the total number of doctoral programs has continued its slow increase since 2007, despite the soft job market for faculty positions in the tenure system.”