The number of philosophy majors in the United States declined in the years leading up to 2015, part of a general decline in the number of humanities majors. 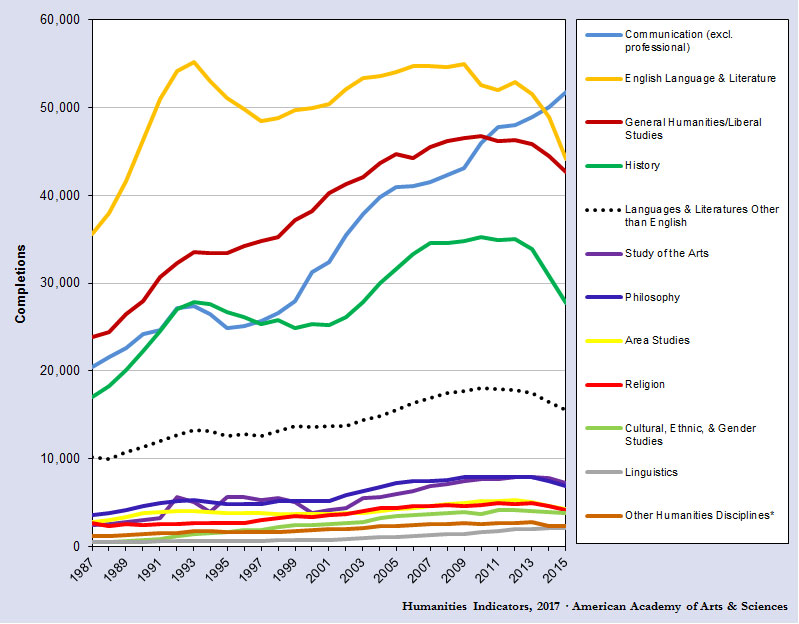 Data from Humanities Indicators, a project of the American Academy of Arts and Sciences, the number of philosophy majors in the U.S. has dropped to 6,851 in 2015 (the last year for which data is reported), down from 7,411 in 2014 and 7,926 in 2013. The table below shows the numbers for philosophy (highlighted) and other humanities disciplines:

The field’s market share among all bachelor’s degree recipients sank to a historic low in 2015—falling below 12% for the first time since a complete accounting of humanities degree completions became possible in 1987.

Other fields are also losing a share of students. Compared to a decade earlier, only engineering, the health and medical sciences, and the natural sciences saw an increase in their share of baccalaureate degrees. The field of education had the largest decline—down 27% from 2006 to 2015, which surpassed declines of 20% in the humanities and 13% for business and management.

You can read more about the data Humanities Indicators collected about bachelors degrees in the humanities here.

Meanwhile, the number of associates degrees in the humanities has reached its highest level ever: 363,491.