Pauline Kleingeld, professor of philosophy at the University of Groningen, has been named as one of the winners of this year’s Spinoza Prize. 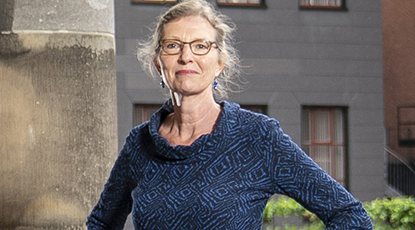 The prize, awarded by the Dutch Research Council (NWO), is 2.5 million euros (approximately $2.8 million) and is known as one of the highest distinctions for research in the Netherlands. Professor Kleingeld is one of four winners of the prize this year.

The NWO recognized Professor Kleingeld as “an astute and versatile researcher”:

A groundbreaking interpretation of Kant’s ethics and political philosophy provides new perspectives on moral universalism, autonomy, free will and cosmopolitanism. She also critically assesses Kant’s racist and sexist prejudices. Thanks to her original approach and ideas, she has become an internationally renowned Kant expert who also builds important bridges to current philosophical discussions and behavioural sciences research.

You can learn more about her research here and here.

Despite being named after a philosopher, the Spinoza Prize is rarely won by philosophers. In its 25 year history it has been awarded to only two other professors of philosophy besides Professor Kleingeld: Johan van Benthem (Amsterdam) in 1996 and Lodi Nauta (Groningen) in 2016. The other awardees this year work in chemistry and biology.

I’m super glad to see this. Her work on Kant is some of my favorite – careful, detailed, and a good reply to some popular takes on him these days. An excellent choice. Report

Jonathan Surovell on Optimism about Metaphysics (and Philosophy in General)

The question of the role of intuitions in philosophy has been a thorny one for a long time. So I'm surprised to hear that everyone […]

Adam Groll on Optimism about Metaphysics (and Philosophy in General)

I've checked my notes and want to give more exact figures, amending what I stated above. Nevertheless, the general landscape of the CRC program is […]

Like the faculty rosters of the Canadian university in general and Canadian philosophy departments more specifically, the roster of CRC holders is disproportionately dominated by […]

It's worth looking at who has been running SSHRC for the last 10 years: Paul K. BatesChair of the Independent Audit CommitteeA Certified Professional Accountant and […]

Sorry I am late to this. What deeply frustrates me is that in my experience, the improvements there have been are largely on the back […]

Your experiences seem to be similar to mine. I wish I had some useful advice for you. If you're like me, you'll adapt to working […]

Speaking of Rawls, one might mention the friendship or connection between him and H.L.A. Hart (see, e.g., Forrester, In the Shadow of Justice, p. 22);

Amy Schmitter on Philosophy Enrollment Grows -- a Little -- in Canada

It’s kind of amazing that we at the U of Alberta have grown so much, although the period just before the times cited above may […]

Oh, man, this one hurts — Aryeh was a large part of why I got into philosophy. I took his (year-long) historical Intro Phil class […]