Flying around social media yesterday were cheers that Oxford University had issued a “Statement on the Importance of Free Speech” in response to a motion from the Oxford Student Union allegedly to “ban ‘ableist, classist and misogynist’ reading lists”. 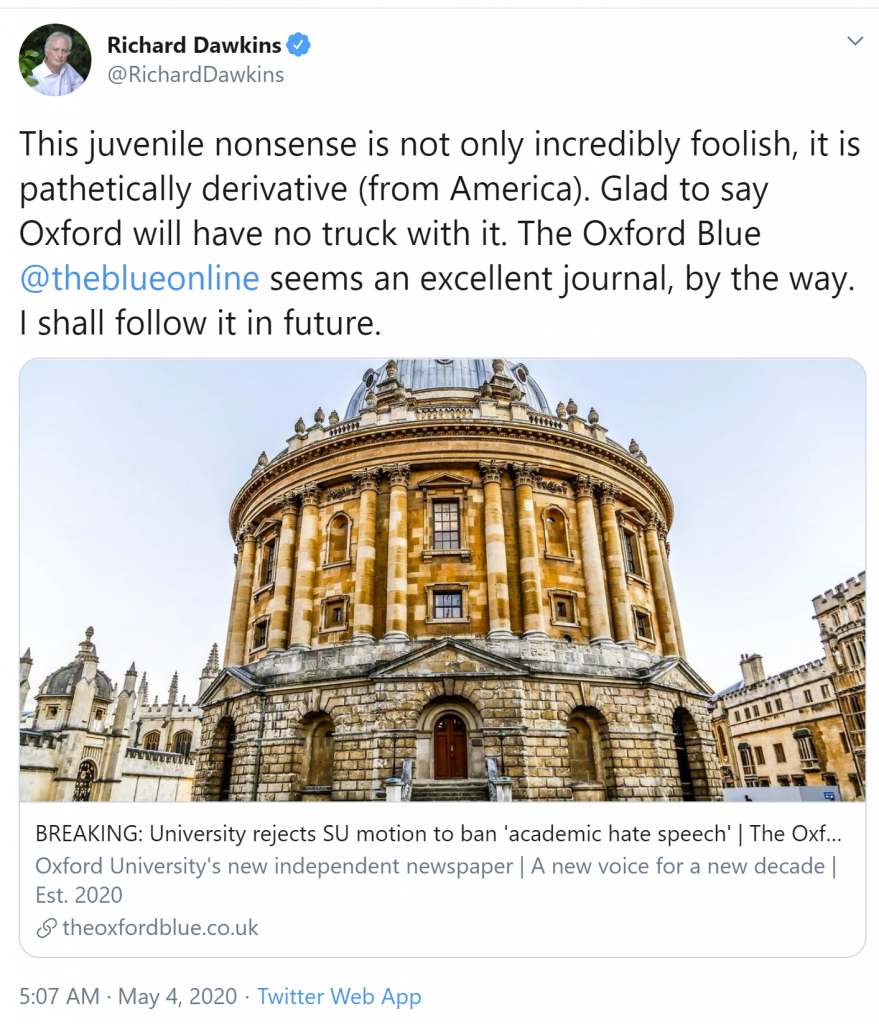 I checked out the widely circulated Oxford Blue article linked to in Dawkins’ and others’ tweets, as well as the Oxford Student article first reporting on the Student Union motion. Though there were a few snippets here and there, neither article included or linked to the whole text of the motion, or even a substantial block of it.

And what of the “Statement on the Importance of Free Speech” that Oxford University “released”, according to the May 3rd Oxford Blue article? Fortunately, the authors of the article included the entire text of that statement. However, it appears to be the exact same text already posted last year on at least a couple of Oxford sites and released at least as early as May, 2017. It’s not clear what actually happened here. Perhaps the university simply referred the journalists at Oxford Blue to this pre-existing statement. [Update: according to the reporter, yes, this is what happened.]

Oxford Blue also reports that “the university” (they don’t specify who) said, “I can confirm that the University has no plans to censor reading materials assigned by our academics.”

Censor reading materials? Is that what the students were calling for? Not exactly. 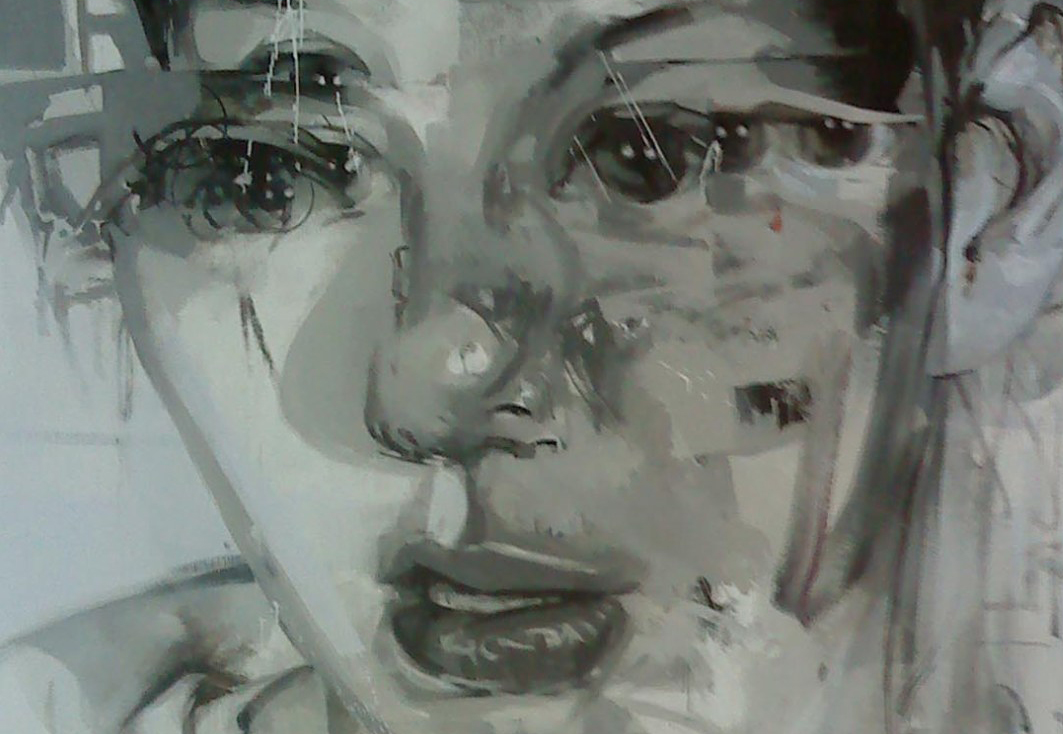 A fellow twitterer answered my request for the actual motion, and from the looks of it, the students were basically aiming for four things:

What to make of these demands? The first thing to note is that none of this is censorship. So, for “the university” to say that it has “no plans to censor reading materials” is not, strictly speaking, to reject the student union motion. The closest we get to censorship in the motion is in the condemnation called for in #4, above. That isn’t technically censorship, but it may have similar effects (I don’t know, as I don’t know anything about those particular offices or whether Oxford faculty care about whether they condemn their reading selections). [Note: in light of the correction of #4, above, I think it is safe to say that #4 does not come close to constituting censorship.] #2 might strike some as censorship but it seems “pro-freedom” to me, for if its effect would be to give students more choice—here, not to take a course they otherwise would have been required to.

(In one line in the original document, the students complain about the lack of “criminalization” of certain forms of biased speech, but what they end up calling for from Oxford isn’t the criminalization of speech.)

The extent to which these demands are anti-free speech turns in part on what material is actually covered by it. I don’t know enough about the legal context to know exactly what kinds of texts would be picked out by “intended or likely to stir up” hatred. Are historical documents and older writings ever included here? Has the assignment of a hateful text for the purposes of study ever been the target of the Public Order of 1986 or university policies based on it? Readers, help us out.

Here’s the actual text of the motion (courtesy of Eric Sheng):

As you can see, the students named one example of a text they think would fall under their expanded hate speech proposal: “Procreative Beneficence: Why We Should Select the Best Children” by Julian Savulescu, which appeared in Bioethics in 2001. In this article, Savulescu argues that prospective parents “should select the child, of the possible children they could have, who is expected to have the best life, or at least as good a life as the others, based on the relevant, available information,” which they took to be objectionably ableist.

I don’t think the students did themselves any favors with this choice of example, in which Savulescu distinguishes between identifying conditions, such as poor memory, that tend to make people’s lives worse (a claim he endorses) and saying that people with those conditions are less deserving of respect or are less valuable (a claim he rejects). Regardless of whether one thinks Savulescu’s argument is any good, this article is certainly neither intended to, nor likely to stir up, hatred against disabled persons. The students are just mistaken that it is an example of hate speech.

Suppose, though, that they weren’t mistaken. Even if it were hate speech, note that the students are not calling for Oxford to ban Savulescu’s essay. Rather, they are arguing that students be given the option to take a course in which it is assigned, and that students be warned about its content. One way to put this is that they’re arguing for “informed consent” for encountering hate speech.

Unfortunately, they are also asking for administrators* [students actually; see the correction to #4, above] to condemn the assigning of the reading. Though I tend to favor “more speech” approaches to allegedly objectionable speech, without measures to separate the authority’s expressive actions from its coercive ones (a la Brettschneider), this is an overreach. [Note: in light of the correction of #4, above, which makes clear that it is students, not administrators, being asked to condemn the readings, I retract this criticism.]

So what to think about all of this? Here are three takeaways (feel free to add your own):

(a) The students care about the welfare of the vulnerable among them and are pointing out what they take to be a problem of arbitrariness in law and policy (that there are protections on the basis of, say, race and religion but not gender and class).

(b) The students are arguing for a more-freedom, more-information, and more-speech approach to solving this problem, rather than censorship.

(c) The students seem to have an overly inclusive conception of what counts as hate speech.

I think (a) is good, (b) is a mixed bag owing to  [see the correction to #4, above] the confused language of “criminalization”, and (c) is not terrible but not good, either.

It isn’t surprising that students are susceptible to this mistaken reasoning. For one thing, they’re still learning how to think carefully. For another, it’s not always a mistake to reason this way, and in some contexts (or for people with certain backgrounds) it could be a reasonable heuristic to employ.

Ironically, this kind of reasoning might have been in play in the widely shared descriptions and attitudes expressed about this story, which framed the students as censors. We might think that someone who favors censorship might express the same kinds of concerns the Oxford Student Union did in their motion. But it would be a mistake to conclude, as many seemed to do, that because they expressed such concerns, the students were calling for censorship. They weren’t.

I suppose an additional takeaway would be that, as with some other disputes over speech, the combatants may have more in common than they realize.