TrueSciPhi.org features a variety of lists and statistics regarding philosophy communities on social media including Twitter, podcasts, and YouTube. For project background, please see the previous quarterly update. This update focuses on philosophers & philosophy organizations on Twitter.

The TrueSciPhi site tracks over 500 philosophers on Twitter who each have over 1,000 followers. Lists of those who have gained the most followers (on a percentage basis) in the past week, month, quarter, and year can be found here. The top gainers in Q2:

As can be seen in the charts below which cover both Q1 and Q2, some accounts arrive on these lists due to isolated events, while others rely more on steady growth across the quarter: 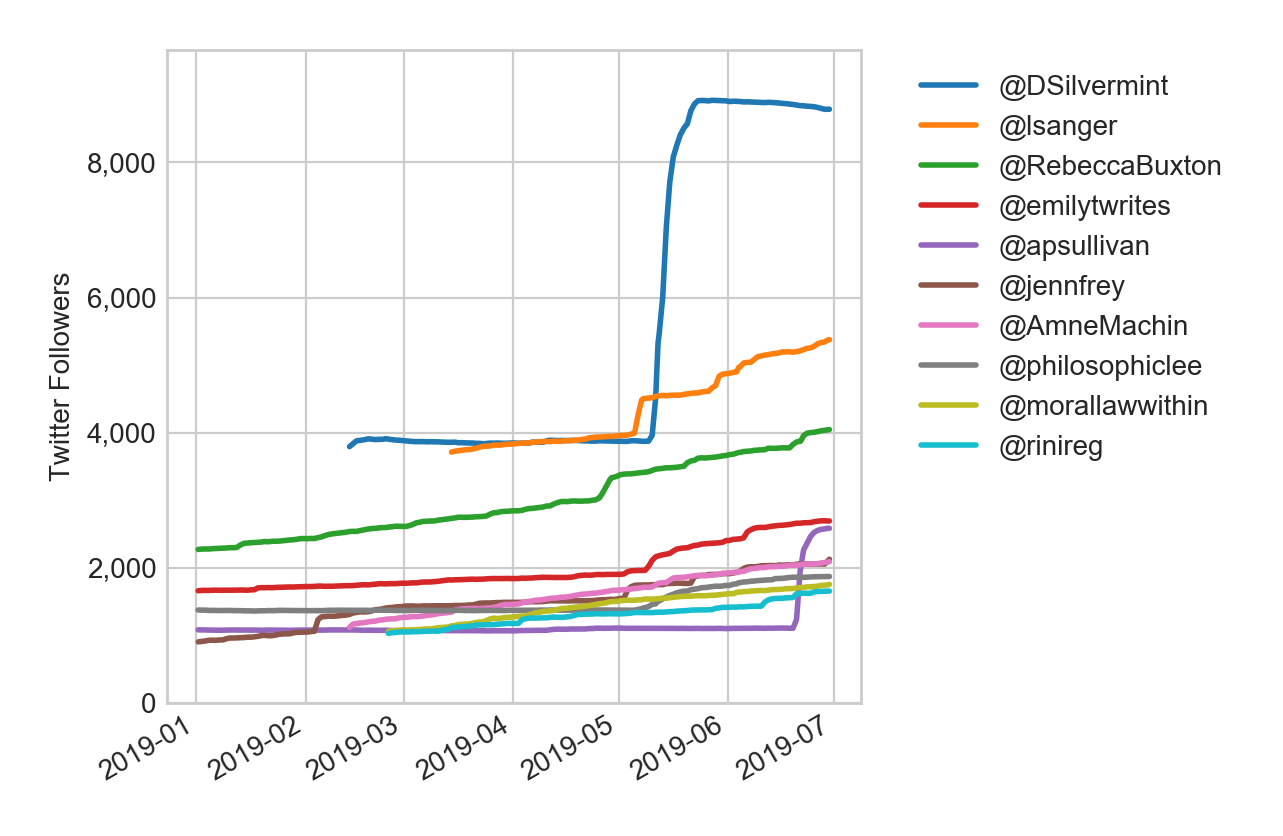 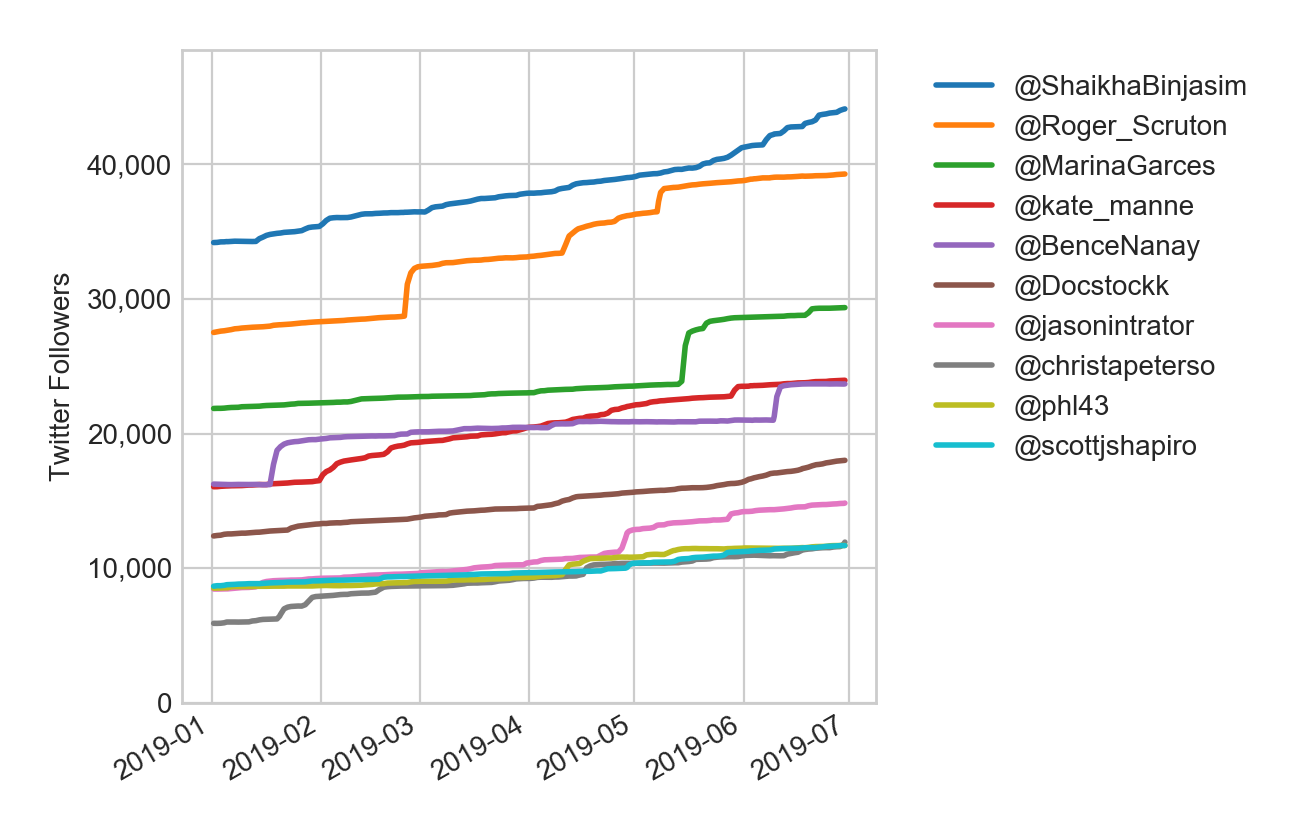 Often, jumps in followers are due to viral tweets. Two examples:

Daniel Silvermint (Assistant Professor in Philosophy & Women’s, Gender, and Sexuality Studies at the University of Connecticut) more than doubled his following with this thread on Game of Thrones, which thus far has 17.5K retweets and 37.5K likes:

Want to know why Game of Thrones *feels* so different now? I think I can explain. Without spoilers. /1#GameofThrones #GoT #WritingCommunity

Aaron Paul Sullivan (PhD student in Philosophy & Linguistics at the University of Missouri-Columbia) jumped from 1,100 to over 2,500 followers with this humorous tweet, which thus far has 17.4K retweets and 66.8K likes:

Who follows whom among philosophers on Twitter?  The graph below depicts “follow” relationships between philosophers who have over 10,000 followers. (The social network graphs in this section were created using features of the Wolfram Language.) 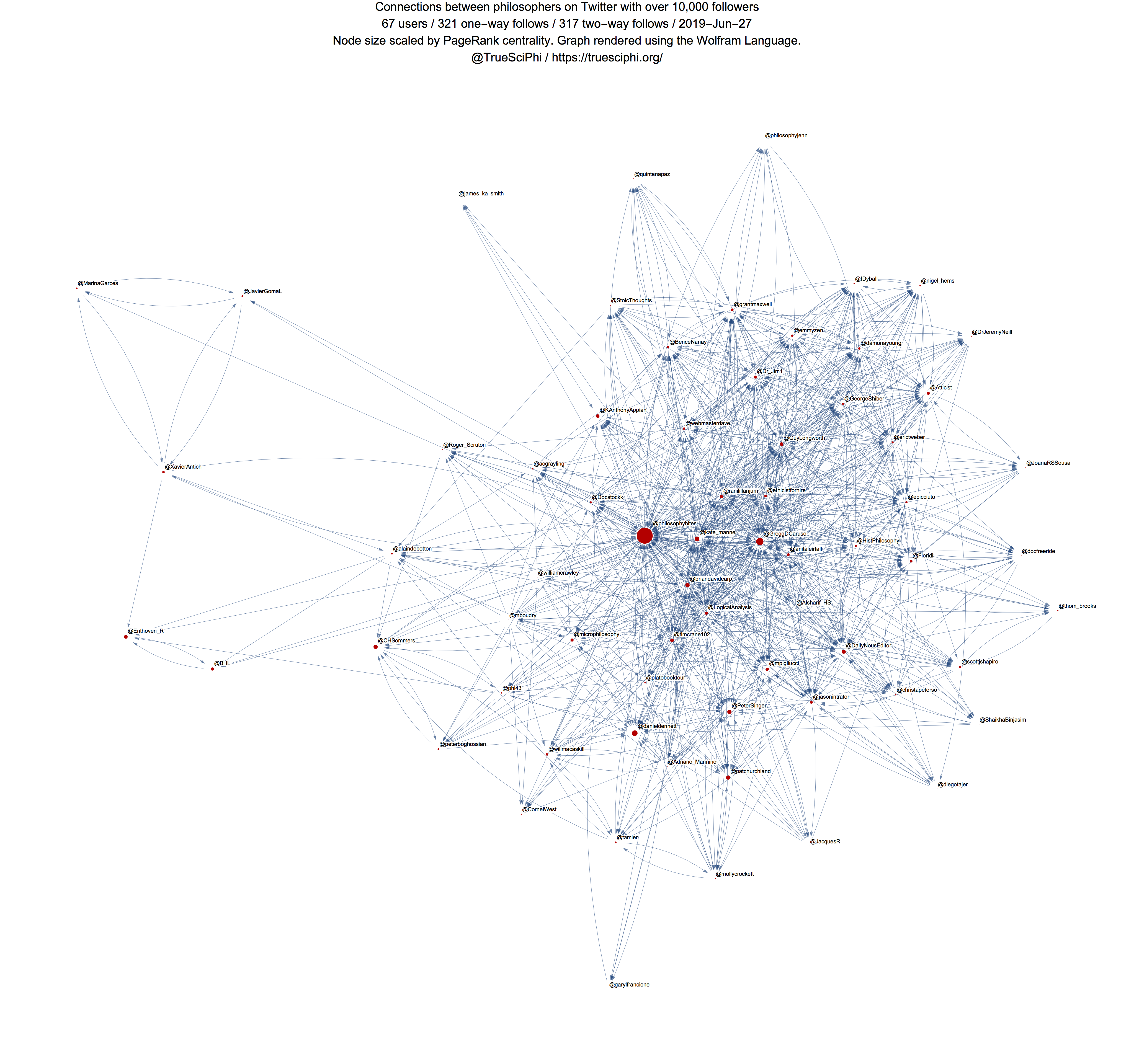 Figure 3: Connections between philosophers on Twitter with over 10,000 followers

The position of a given node in this graph reflects how tightly connected it is to the others. An effect of the positioning algorithm is to draw a distinction between a small number of Spanish and French philosophers at left in the graph vs. the bulk of the network, mostly anglophone, to the right.

In addition, the size of a given node reflects a metric known as Page Rank centrality, which (simplistically) is the probability that following a series of randomly selected connections in the graph will lead to the node. The accounts in this graph with the highest PageRank centrality are @philosophybites, @GreggDCaruso, @danieldennett, @kate_manne, and @briandavidearp.

Lowering the threshold to look at philosophers who have over 7,000 followers leads to a denser graph and a slightly different list of PageRank centrality leaders, as @SkyeCleary (at 9,029 followers, below the minimum for the first graph) appears at #4 ahead of @kate_manne at #5. 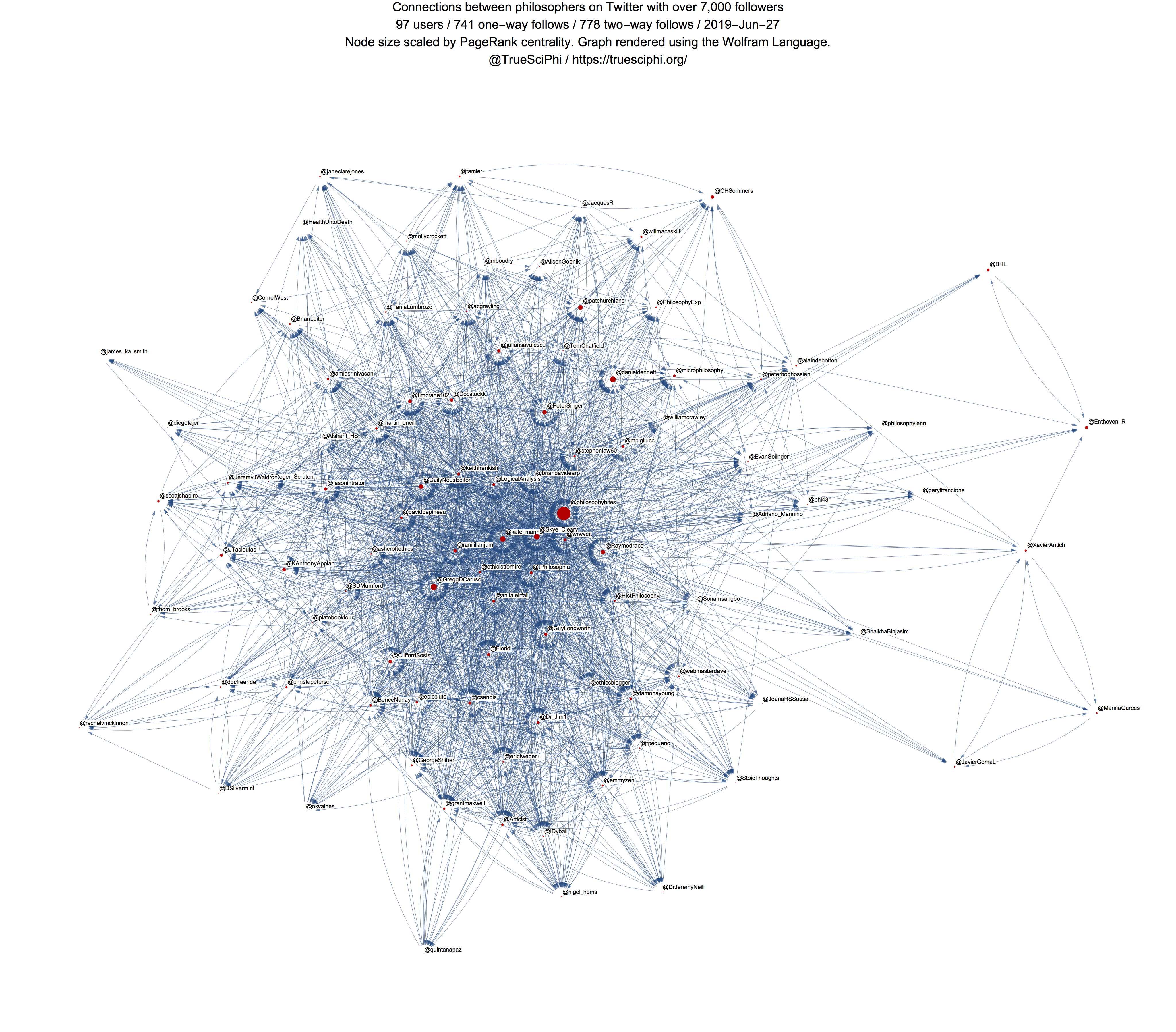 Figure 4: Connections between philosophers on Twitter with over 7,000 followers

The TrueSciPhi site also presents a list of philosophy organizations that have over 500 Twitter followers. From the graph below of connections between organizations with over 3,000 followers, it is apparent that this set of institutional accounts tend to follow each other to a greater degree than the individual accounts in the previous graphs do, and the PageRank centrality metric is not so sharply peaked in a small number of accounts. 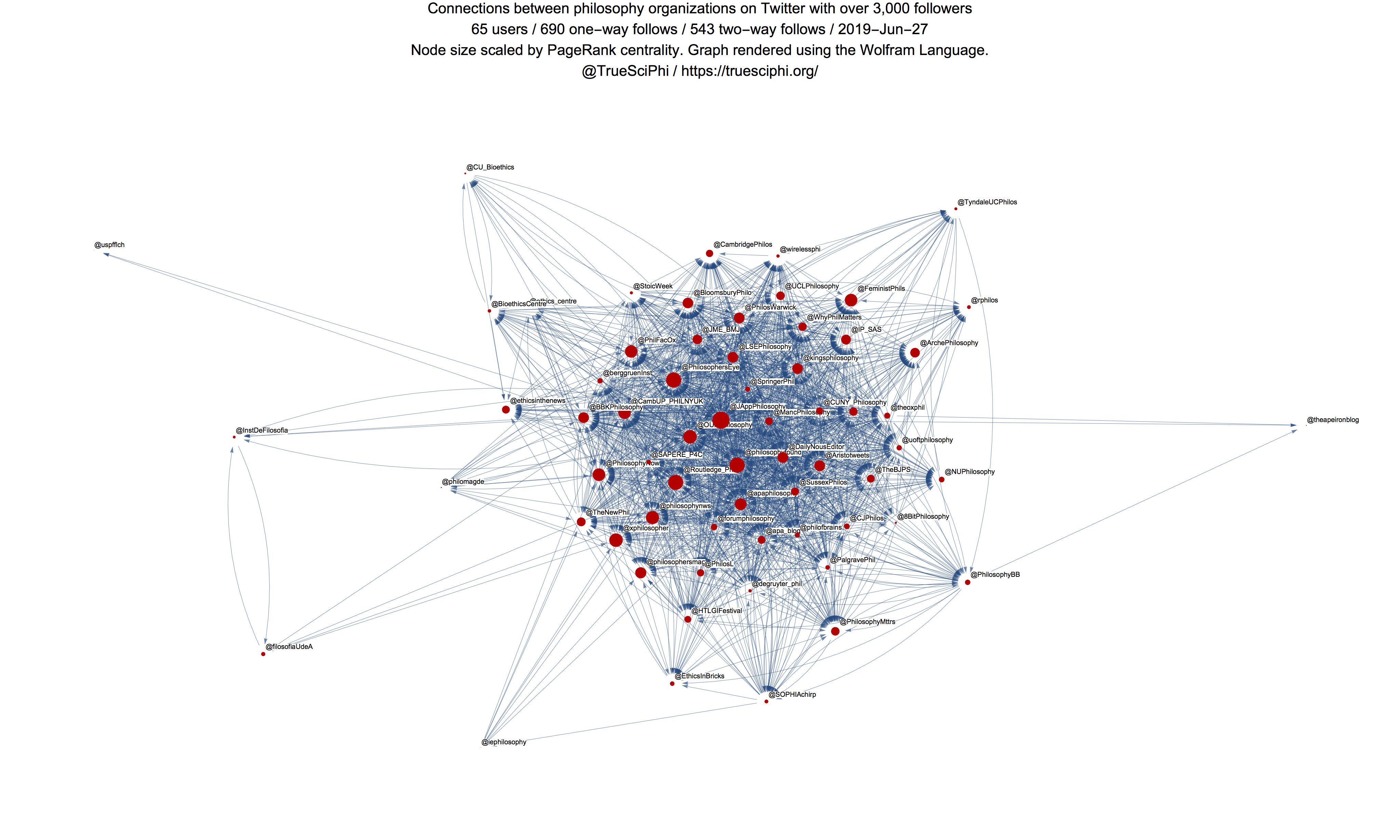 Figure 5: Connections between philosophy organizations on Twitter with over 3,000 followers

There are numerous philosophy-related podcasts, and tracking three dozen reveals they collectively have published over 1,100 episodes just in the trailing twelve months. A simple chronological episode list such as found in a podcast application is worthwhile, but other useful orderings incorporating metrics regarding episodes or whole series can be imagined.

It would be fascinating to know which episodes, or at least which series, are most listened to by philosophers, but such data generally are not available. As a poor approximation to that, however, it is possible to consider how many philosophers follow the Twitter account of a given philosophy podcast (or its creator, if there is not a distinct account for the podcast itself). The Philosophy Podcast Episodes (Ranked) list does just this. It is assembled starting from a purely chronological list and then weighting each series by the number of philosophers (listed here) following the podcast’s account. The result is an episode list on which the episodes within a series are ordered from newest to oldest, but the weighting often results in older episodes of a highly followed series rising above newer episodes from less-followed series. 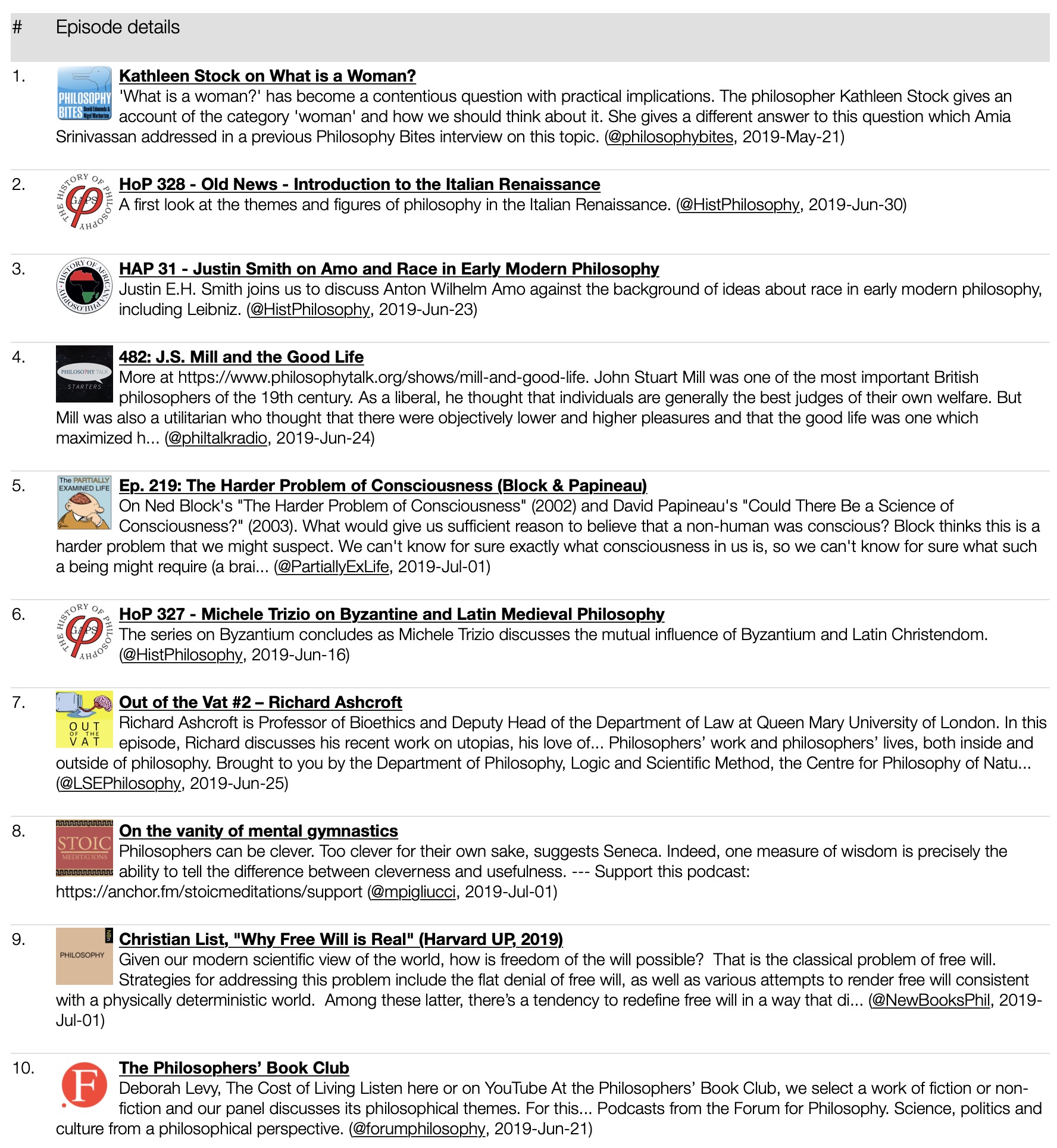