Philosophers are people, too, and so my social media feeds have been abuzz with philosophers analyzing and speculating about the wrap up of the show. The most widely circulated of these has been a viral tweet thread from Daniel Silvermint (Connecticut) that was picked up by a number of outlets and ultimately republished as an article in Wired.

For what it’s worth, my guess, which I will put very vaguely so as to not spoil much for those who have not been watching, is that the show will ultimately end up being circular, with the major families occupying roughly the same positions they did several years prior to the start of the series, with future conflict looming, conveying a message pessimistic about humanity and its governance. (I did not read the books on which the series is based, nor am I an obsessive fan, so this prediction probably misses something.) 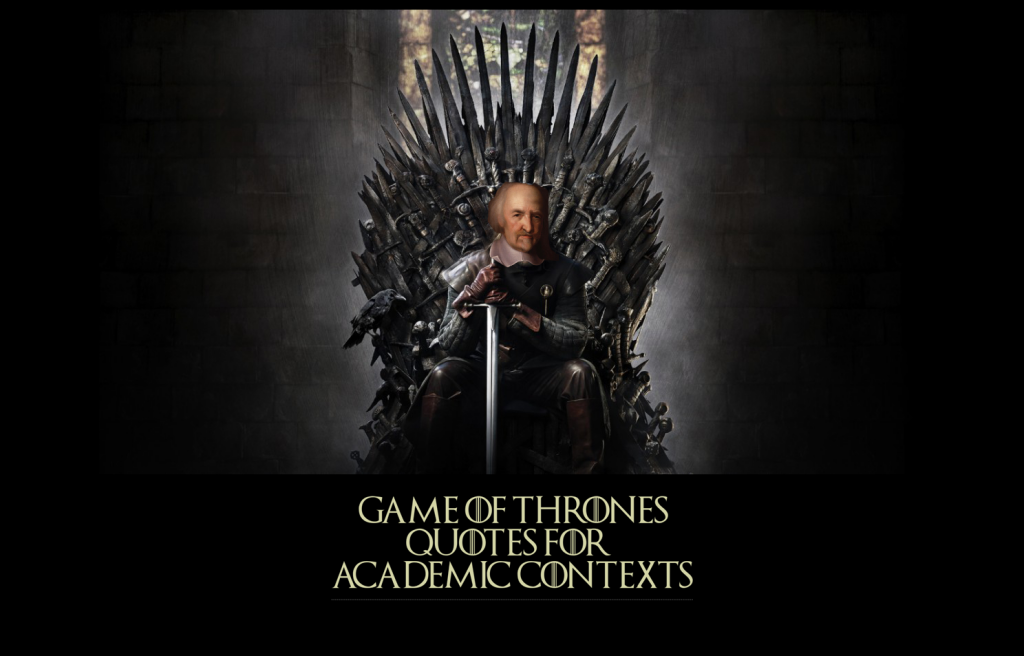 The show has had some good one-liners, and it struck me that some of it is spot-on for certain academic contexts. Here are ten:

“When you play the game of thrones, you win or you die.” — Cersei
The tenure-track.

“Everyone is mine to torment.” — Joffrey
When the provost has a new initiative.

“The day will come when you think you are safe and happy, and your joy will turn to ashes in your mouth.” — Tyrion
Post-tenure letdown.

“You know nothing, Jon Snow.” — Ygritte
Why you shouldn’t talk in faculty meetings your first year on the job.

“Night gathers, and now my watch begins” — Various members of the Night’s Watch
It’s late, the presentation is tomorrow, and you are still working on your slides.

“That’s what I do: I drink and I know things.” — Tyrion
At the bar after the presentation has gone well.

“Winter is coming” — Pretty much everyone
There is some news concerning the budget.

“I read it in a book.” — Samwell Tarly
When you find that one tiny detail that changes the discussion.

“I don’t plan on knitting by the fire while men fight for me.” — Lyanna Mormont
When the person in the audience who is knitting asks the most devastating question.

“The big fish eat the little fish and I keep on paddling.” — Varys
Just stay off Twitter and do your work.

Feel free to add your own.

“If you think this has a happy ending you haven’t been paying attention.” — Ramsay Bolton

To discourage undergraduates from applying to graduate school.Report

“I know what’s good.”—Daenerys
When serving as reviewer 2.Report

Tywin Lannister: “And any man who must say ‘I am king’ is no true king at all.”
When a speaker insists that some claim is intuitively undeniable.

Grey Worm: “You are not here to speak! Everyone has heard enough words from you.”
When there’s a three-part question.Report