A story called “The Game” by Anatoly Petrovich Mickevich (writing under the pseudonym A. Dneprov), published in 1961, tells the story of a fictional event in which people who don’t individually understand Portuguese are successfully arranged into a “computer” that translates a sentence from Portuguese. 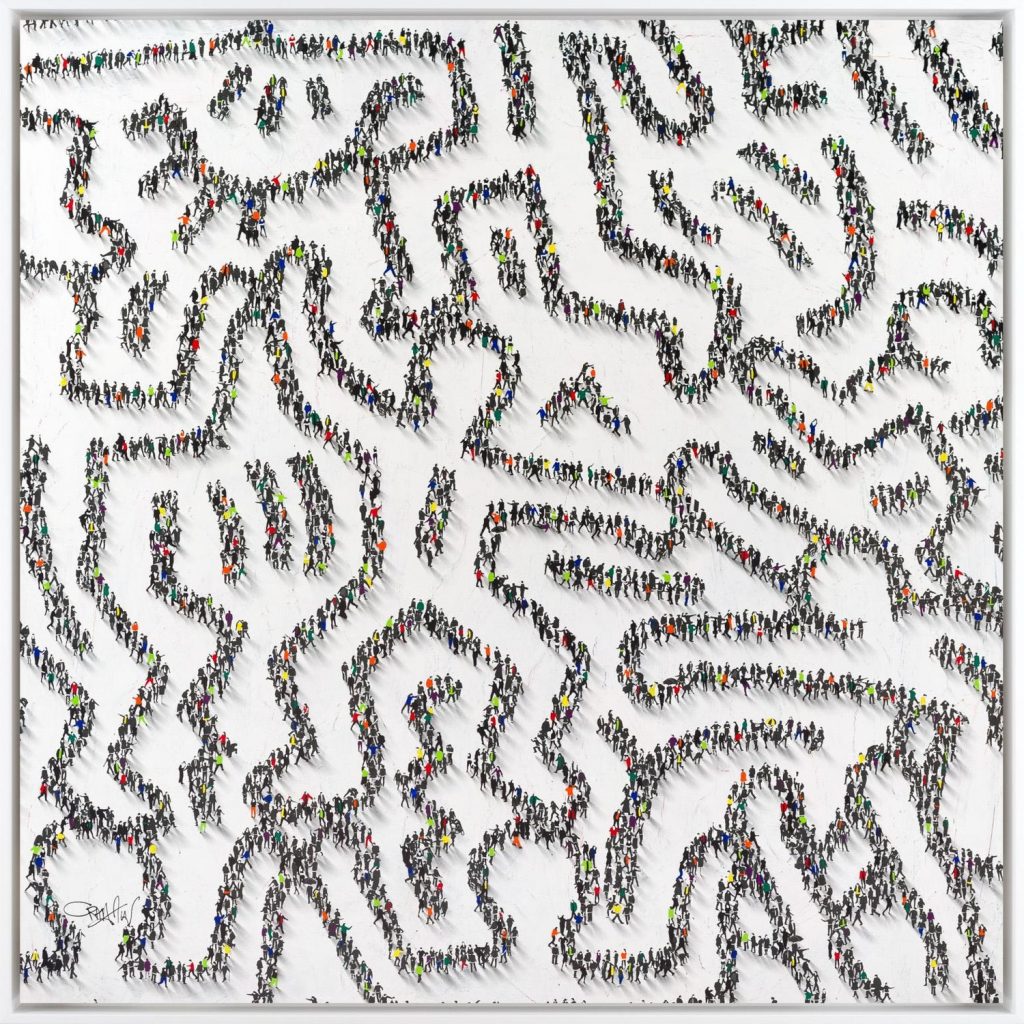 You can read the story and some information about its background and discovery at the website of the Center for Consciousness Studies (CSC), part of the Department of Philosophy at Moscow State University, where it was posted last year.  The story describes 1,400 people being directed to function as  “either a memory cell, a total mechanism, a time-delay line, or a simple switch,” in an attempt to discover an answer to the question, “Can mathematical machines think?”

When the layout was complete the stadium looked like a large gym with fourteen hundred young people inside ready to exercise. Then again came the professor’s voice:
“Here are the rules.
Binary numbers will be given to comrade Sagirov from the northern stand. For instance, ‘one-zero-zero-one.’ If the first digit is ‘one,’ comrade Sagirov is to pass the number to the person on his right, whereas all numbers starting with ‘zero’ shall go to the person on his left.
All numbers which start with ‘double ones’ or ‘double zeros’ go to the person right behind comrade Sagirov. As for the others, whenever you receive a number please add your personal number to it, and depending on what you get pass it on to the person beside you. In addition, if the group number is …”
And so forth.
Zarubin explained the rules three times, then asked “Clear?” and heard our unanimous “Clear!” After that he said:
“Let’s get started then.”
Standing between teams “110” and “1001” I could see Zarubin’s assistant, Semyon Danilovich, talking to the Georgian delegates. They must have needed some additional guidelines.
On the stroke of 10:00 am the game started.
I saw heads starting to turn right and left at the northern stand area, then these moves went further to cover the entire stadium.
These weird moves followed across the vast area like waves flowing from person to person and from group to group. The message was approaching me through a sophisticated zigzag route, and, finally, the guy on my right, carefully listened to the one behind him, took a piece of paper, did some quick calculations, touched my shoulder, and uttered:
“One-one-one-zero-one-zero.”
According to the guidelines my job was to cut off all digits apart from the first four which I had to pass on to the next team.
“One-one-one-zero,” I said to the girl in front of me.
In less than a minute I had another binary number which I passed on.
The participants were beginning to move more and more eagerly. In about an hour, the field was continuously swaying, and the air was filled with voices shouting out pretty similar stuff — “one-one… zero-zero… zero-one…” — and pushing the numbers across lines and columns … Now they were coming from different parts of the stadium, absorbing the beginning and end of this strange game in which no one could understand a thing, but all awaited the paradoxical conclusion the professor promised.

It’s pretty short; read the whole thing, translated from its original Russian by A. Rudenko, here.

The introduction to story, written by whoever posts material for the CSC, notes its similarity to the well-known “Chinese Room” example by John Searle (previously).

Readers may also be interested to learn that the human computer depicted in “The Game” is very similar to one described by Cixin Liu in a passage in The Three Body Problem, the first book in his astounding science fiction trilogy, The Remembrance of Earth’s Past. Perhaps Liu, who wrote that book in 2006, got the idea from Mickevich.

Not to mention Monty Python’s “Dirty Hungarian Phrasebook” sketch, originally from 1970 (subsequently updated–the version that appears in “And Now for Something Completely Different” is arguably the best). Has the added benefit of being utterly hilarious.Report

dneprov’s wonderful story (rediscovered by vadim vasilyev and posted on the moscow center’s website back in 2014) was certainly well ahead of its time. there are two main differences with searle: (1) it uses many people implementing the program rather than just one, so it’s perhaps somewhat closer to ned block’s earlier chinese population case. (2) the program is being used just for translation rather than for carrying on a conversation. we now know that translation can be done fairly well by AI that doesn’t have anything like human-level intelligence or consciousness, so perhaps translation isn’t quite as good a case for the author’s anti-AI purposes as conversation.Report

I always sort of thought Hitchhiker’s Guide to the Galaxy scooped Searle, with Earth itself being a computer and people computing the question. (I guess that didn’t pre-date Searle by a whole lot, though.) And as Dave says above, it too is closer to Block’s version of the argument.Report

As Marcin Miłkowski noted on twitter (https://twitter.com/MilekPl/status/1128591646772350977), Stanisław Lem also discusses something like this story in his Summa Technologiae (1964), although I am still searching for the exact reference (perhaps the ‘Gramophone’ machine in the section titled ‘The Ghost in the Machine’?).Report

Hilary Putnam’s 1967 paper, “The Nature of Mental States” puts forward a functionalist theory of pain as satisfying a certain computational description. He stipulated that no organism capable of feeling pain was decomposable into parts that separately satisfied the computational description. The purpose he said was to rule out swarms of bees as single pain feelers. See http://web.csulb.edu/~cwallis/382/readings/482/putnam.nature.mental.states.pdf, p. 55.Report

Even earlier (if only partially related) predecessors include Leibniz’s mill argument. When this occurred to me I looked it up in order not to look stupid: the SEP article on the Chinese room actually also lists Turing’s paper machine and Block’s Chinese nation (mentioned above) as antecedents.
https://plato.stanford.edu/entries/chinese-room/#2.2Report

I think it’s important to point out every time this noxious theory is mentioned just how wrong it is! I’ve rechristened it Searle’s Racist Room.
The problem is that it to be convincing, it presupposes that Chinese is the kind of system that can be convincingly emulated by a computer, i.e. not a real human language. That’s not correct.
In order to see how wrong it is, simply replace Chinese with English, which shouldn’t in theory affect the thought experiment. The power of the thought experiment depends on us uncritically accepting Searle’s proposition that there is definitely a computer/program that can converse fluently in Chinese. I don’t believe that proposition would be accepted for English; so why is it accepted for Chinese?
The SEP says: “Searle’s wider argument includes the claim that the thought experiment shows more generally that one cannot get semantics (meaning) from syntax (formal symbol manipulation).”
So apparently, Searle’s claim is that the Chinese language can be successfully simulated by “formal symbol manipulation”. That is a genuinely racist thing to think.Report

An even earlier anticipation is this passage from Rogers, Hartley, Jr. (1959), “The Present Theory of Turing Machine Computability”, Journal of the Society for Industrial and Applied Mathematics 7(1): 114–130:

“Consider a box B inside of which we have a man L with a desk, pencils and paper. On one side B has two slots, marked input and output. If we write a number on paper and pass it through the input slot, L takes it and begins performing certain computations. If and when he finishes, he writes down a number obtained from the computation and passes it back to us through the output slot. Assume further that L has with him explicit deterministic instructions of finite length as to how the computation is to be done. We refer to these instructions as P. Finally, assume that the supply of paper is inexhaustible, and that B can be enlarged in size so that an arbitrarily large amount of paper work can be stored in it in the course of any single computation. …I think we had better assume, too, that L himself is inexhaustible, since we do not care how long it takes for an output to appear, provided that it does eventually appear after a finite amount of computation. We refer to the system B–L–P as M. … In the approach of Turing, the symbolism and specifications are such that the entire B–L–P system can be viewed as a digital computer …. Roughly, to use modern computing terms, L becomes the logical component of the computer, and P becomes its program. In Turing’s approach, the entire system M is hence called a Turing machine.”