Why study the history of philosophy? That’s a question Clifford Sosis (Coastal Carolina) asks Peter Adamson (LMU) in a new interview at What Is It Like To Be A Philosopher?

To questions like this I am always tempted to give the most provocative possible answer, namely: who cares what today’s analytic philosophers think, in comparison to giants like Plato, Avicenna, or Confucius? (Or indeed non-giants like Theophrastus, Mechthild of Magdeburg, or Uddyotakara: at least their works are still being read many centuries after they died, which is surely more than we’ll be able to say for 99% of contemporary philosophy.)

Just consider that, if you go out on the street and ask people to name some great philosophers or say what “philosophy” means to them, they will certainly not say anything that is reminiscent of analytic philosophy but are pretty likely to mention something about the history of philosophy. So to me it is rather bizarre that historians of philosophy are always put on the defensive in this way. We are the ones doing the part of philosophy that non-philosophers will readily recognize as meaningful and serious, and it is the contemporary philosophers who could more easily be accused by outsiders of wasting their time. Not that I personally think that they are wasting their time! I’m just saying the onus of self-justification should not really be on the historian. The fact that it often is, mostly has to do with the fact that we have to persuade non-historian philosophers to hire us.

Having gotten all that off my chest, I would concede that there is a serious question here too.

There is an obvious rationale for doing history of philosophy which is that it is a kind of history. It’s pretty uncontentious that we want to understand the past, and we can’t understand the past without understanding the ideas of the past, which is where the historian of philosophy comes in. And that is probably why non-specialists will find it immediately obvious that history of philosophy is worthwhile. However we also want to be taken seriously as contributing to philosophy and not just history; so how is it that we do this? A frequent answer is that one can delve back into the past to find answers to problems that modern-day philosophers take seriously. But I am pretty skeptical of that answer. That would lead you to focus on the figures, texts and debates that happen to seem relevant to today’s concerns, to the cost of other topics.

To the contrary, I think one great service we as historians can do is to call attention to philosophical debates and positions that are not liable to arise in our own context. Contemporary philosophy is, as I always like to say, only the most recent part of the history of philosophy, and it’s not easy to be sure whether it is a particularly fruitful part, to say nothing of being the one period of philosophy that just happens to be handling all philosophical questions in all the ways that would be illuminating. That notion strikes me as staggeringly arrogant, especially when you consider that “contemporary philosophy” usually means something like “philosophy being done in English in North America, Australia, and Europe” so that it is a geographically and culturally, as well as chronologically, narrow conception of philosophy.

You can read the rest of the interview here, and catch up on the history of philosophy with Adamson’s History of Philosophy Without Any Gaps podcast and blog. 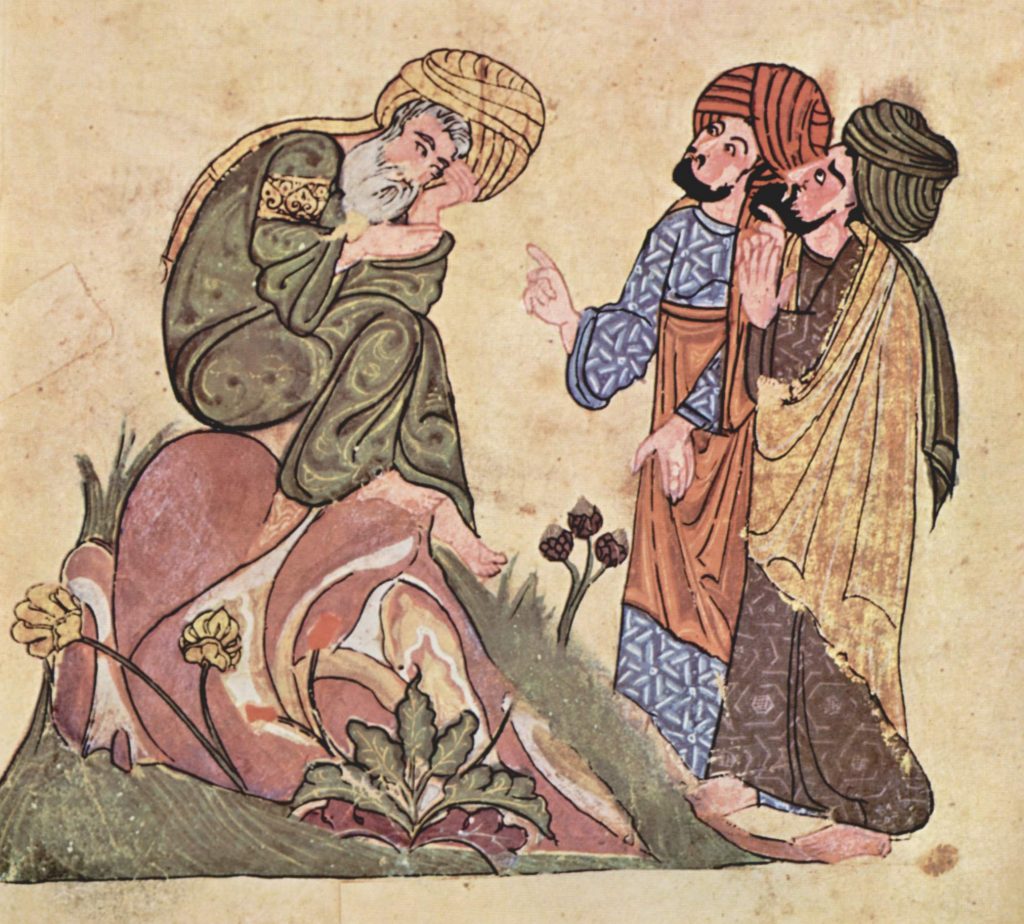 Al-Mubaššir ibn Fatik, depiction of Socrates and students, from “Selected Maxims and Aphorisms”