“Although we like to think that the pursuit of truth is central, it’s by far not the only reason why debates arise and certain concepts are coined and stick around, while others are forgotten.”

“Although contingent, [the types of] factors [that affect what we find conceptually salient] are recurrent. And this is something that affects our understanding of current as well as past debates. The historian can approach current debates as a historian in the same way that she can approach past debates. And this is, I submit, where historians can truly speak to current concerns.”

The following is a guest post* by Martin Lenz (University of Groningen). A version of it first appeared at his blog, Handling Ideas. 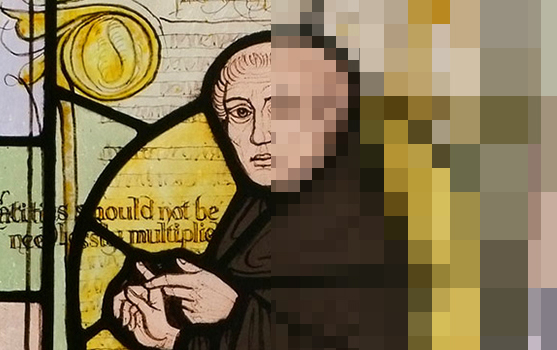 Should contemporary philosophers read Ockham?
Or: what did history ever do for us?
by Martin Lenz

If you are a historian of philosophy, you’ve probably encountered the question whether the stuff you’re working on is of any interest today. It’s the kind of question that awakens all the different souls in your breast at once. Your more enthusiastic self might think, “yes, totally”, while your methodological soul might shout, “anachronism ahead!” And your humbler part might think, “I don’t even understand it myself.” When exposed to this question, I often want to say many things at once, and out comes something garbled. But now I’d like to suggest that there is only one true reply to the main question in the title: “No, that’s the wrong kind of question to ask!” But of course that’s not all there is to it. So please hear me out.

I’m currently revisiting an intriguing medieval debate between William of Ockham, Gregory of Rimini and Pierre D’Ailly on the question of how thought is structured. While I find the issue quite exciting in itself, it’s particularly interesting to see how they treat their different sources, Aristotle and Augustine. While they clearly all know the texts invoked they emphasise different aspects. Thinking about thought, William harkens back to Aristotle and clearly thinks that it’s structure that matters. By contrast, Gregory goes along with Augustine and emphasises thought as a mental action. For these authors it was clear that their sources were highly relevant, both as inspiration and authorities. At the same time, they had no qualms to appropriate them for their uses. In some respects we make similar moves today, when we call ourselves Humeans or Aristotelians. But since we also have professional historians of philosophy and look back at traditions of critical scholarship, both historians and philosophers are more cautious when it comes to the question of whether some particular author would be “relevant today”.

In view of this question, historians are trained to exhibit all kinds of (often dismissive) gut reactions, while philosophers working in contemporary themes don’t really have time for our long-winded answers. And so we started talking past each other, happily ever after. That’s not a good thing. So here is why I think the question of whether any particular author could inform or improve current debates is wrongheaded.

Of course everyone is free to read Ockham. But I wouldn’t recommend doing it, if you’re hoping to enrich the current debates. Yes, Ockham says a lot of interesting things. But you’d need a long time to translate them into contemporary terminology and still more time to find an argument that will look like a right-out improvement of a current argument.* My point is not that Ockham is not an interesting philosopher. My point is that Ockham (and many other past philosophers) doesn’t straightforwardly speak to any current concerns.

The point is that historians study, amongst other things, debates on philosophical issues. “You say tomahto, I say tomato”, that sort of thing. Debates happen now as they happened then. What I find crucial is that studying debates reveals features that can be informative for understanding current debates. There are certain conditions that have to be met for a debate to arise. We’re not just moving through the space of reasons. Debates occur or decline because of various factors.

What we find conceptually salient can be driven by available texts, literary preferences, other things we hold dear, theological concerns, technological inventions (just think of various computer models), arising political pressures (you know what I mean), linguistic factors (what would happen if most philosophers were to write in Dutch?), and a lot of other factors, be they environmental, sociological, or what have you. Although we like to think that the pursuit of truth is central, it’s by far not the only reason why debates arise and certain concepts are coined and stick around, while others are forgotten. Although contingent, such factors are recurrent. And this is something that affects our understanding of current as well as past debates. The historian can approach current debates as a historian in the same way that she can approach past debates. And this is, I submit, where historians can truly speak to current concerns.

Coming back to the debate I mentioned earlier, there is another issue (besides the treatment of sources) that I find striking. In their emphasis of Augustine, Gregory and Peter show a transition from a representational to an action model of thought. Why does this transition occur? Why do they find it important to emphasise action over representation against William? Many reasons are possible. I won’t go into them now. But this might be an interesting point of comparison to the current debates over enactivism versus certain sorts of representationalism. Why do we have that debate now? Is it owing to influences like Ryle and Gibson? Certainly, they are points of (sometimes implicit) reference. Are there other factors? Again, while I think that these are intriguing philosophical developments, our understanding of such transitions and debates remains impoverished, if we don’t look for other factors. Studying past transitions can reveal recurrent factors in contemporary debates. One factor might be that construing thoughts as acts rather than mere representations discloses their normative dimensions. Acts are something for which we might be held responsible. There is a lot more to be said. For now suffice it to say that it is in comparing debates and uncovering their conditions, that historians of philosophy qua historians can really contribute.

At the same time, historians might also benefit from paying more attention to current concerns. Not only to stay up to date, but also to sharpen their understanding of historical debates.** As we all know, historical facts don’t just pop up. They have to be seen. But this seeing is of course a kind of seeing as. Thus, if we don’t just want to repeat the historiographical paradigms of, say, the eighties, it certainly doesn’t hurt if our seeing is trained in conversation with current philosophers.

* That said, this is of course an open question. So I’m happy to be shown a counterexample.

** More on the exchange between philosophers and historians of philosophy can be found in my inaugural lecture.

I’m just worried this post is completely ignoring the forest for the trees. History of philosophy, at least in the United States, is moribund. There’s no hiring in it, and it’s really, really hard to see what sort of argument anyone could make to a dean these days that’d actually work in this regard. Medieval bioethics is probably about the closest you could get, or something like history/philosophy of medicine.

The question shouldn’t be what do historians of philosophy have to offer non-historical philosophers, which, so far as I can tell, nobody has ever disputed. *Philosophers* seem to be quite happy with this sort of stuff. The question should rather be what does history of philosophy have to do with anything deans are likely to fund, which is a much more challenging question than preaching to the choir. We’re quickly becoming a service profession, teaching applied ethics to various professional schools; that’s the broader issue to contend with.Report

History of philosophy, at least in the United States, is moribund.

Evidence for this? Obviously, it depends on what your standards are for being ‘moribund,’ but this does not seem true to me, at least not as compared to other major areas of philosophy. My impression is that most departments with at least several faculty members will have somebody whose main area is history of philosophy on board, and this goes up proportionately as departments get larger. For instance, my first job was at a small public liberal arts college, and I was one of three faculty members: the ethics guy, the metaphysics and epistemology woman, and the history guy (me). My current department is an R1 with an MA program, and 4 out our 13 TT faculty (whose primary home is philosophy) specialize in history of philosophy.

Maybe the wider trends are different–maybe Jon Light is right that now, “we’re quickly becoming a service profession, teaching applied ethics to various professional schools.” But I’d want more data. Even in teaching-centered, regional state universities that focus on employment outcomes–that sort of places you’d expect to focus on service classes for professional programs–I see historians on board. This isn’t at all systematic, but glancing at their faculty profile pages, it looks like one of the 5 permanent philosophy faculty members at the University of West Georgia specializes in the history of philosophy, and 3 of the 7 permanent faculty members (I’m excluding the religious studies faculty) at Georgia Southern.Report

Not based on any data, but it was my impression that places with smaller/no philosophy department are going to be *more* interested in a history of philosophy person, since that’s the person in the best decision to teach your standard-issue intro course.Report

In particular I know that Early Modern is pretty much always being looked for. (I have a friend who’s been on the job market the last few years)Report

I was commenting on hiring, not existing tenured/tenure-track faculty. Obviously those exist. If you look at recent hiring data, though, you can see the problem is going to hit when that cohort starts retiring. (Or continues, too, it’s already happening.)Report

OK, fair enough. But where is that data? My sketchy impression is that some areas (applied ethics, feminist phl, non-Western phl) have been trending up the past few years, while ‘core’ LEM is trending down, but not that History of Phl is tanking hard–which is what I take the adjective ‘moribund’ to imply. I don’t follow the job market super-closely, b/c I’m lucky enough to have a TT job I like, but I vaguely remember hearing that in Ancient phl (my area) in some recent years it’s been relatively strong (while still sucking), while in others it’s been relatively lean.Report

Jon Light, thanks for your comment. Of course, I agree that the market is bad, but I guess that what you say about deans concerns the humanities in general.

However, you write that the “question shouldn’t be what do historians of philosophy have to offer non-historical philosophers, which, so far as I can tell, nobody has ever disputed. *Philosophers* seem to be quite happy with this sort of stuff. ” – I’m not sure this is correct. Philosophers have been dismissive about the value of history even in writing. But even if philosophers were to *love* history, it would still strike me as a legitimate question what they might actually love about it.Report