The following is a guest post* by Gregory Lewis, a medical doctor and amateur philosopher, in which he looks through a statistical lens at the formation of the Western philosophical canon. You can read more of his writings, including an earlier version of the piece that follows, at his site.

Are History’s “Greatest Philosophers” All That Great?
by Gregory Lewis

In the canon of western philosophy, generally those regarded as the ‘greatest’ philosophers tend to live far in the past. Consider this example from an informal poll:

I take this as fairly representative of consensus opinion—one might argue about some figures versus those left out, or the precise ordering, but most would think (e.g.) Plato and Aristotle should be there, and near the top. All are dead, and only two were alive during the 20th century.

But now consider this graph of human population over time (US Census Bureau, via Wikipedia): 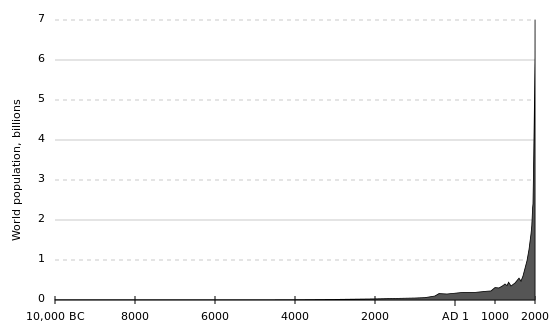 The world population at 500BCE  is estimated to have been 100 million; in the year 2000, it was 6.1 billion, over sixty times greater. Thus if we randomly selected people from those born since the ‘start’ of western philosophy, they would generally be born close to the present day. Yet when it comes to ‘greatest philosophers’, they were generally born much further in the past than one would expect by chance.

Where are the 13 Platos in modern day Attica?

The Attican population in the time of Plato is thought to have been 250 to 300 thousand people (most of whom weren’t citizens, but ignore that for now). The population of modern day Attica (admittedly slightly larger geographically than Attica in the time of Plato) is 3.8 million. If we say Plato was the most philosophically able in Attica, that ‘only’ puts him at the 1 in 300,000 level. Modern Attica should expect to have around thirteen people at this level, and of this group it is statistically unlikely that Plato would be better than all of them. I am sure there are many very able philosophers in modern day Athens, but none enjoy the renown of Plato; were Plato alive today, instead of be recognized as one of the greatest of all time, perhaps he would be struggling to get tenure instead.

This example turns on how one defines the comparison classes, and these are open to dispute (e.g. was Plato the best in Attica, the best in Greece, or the best in the ancient world?) But the underlying point stands: If philosophical greatness were a matter of natural lottery, the most extreme values of a much larger population are usually greater than that of a much smaller population, and the distribution of greatest philosophers should be uniform by birth rank. It would be incredibly surprising that three of the top ten greatest philosophers of all time (Plato, Aristotle, Socrates) would be situated in such a small fraction of this population.

Why doesn’t Athens now have more than 13 Platos?

The toy example is grossly simplistic, and many factors intervene between being naturally gifted at philosophy and one’s ‘mature’ philosophical ability. Yet this makes the ‘pastward skew’ of philosophical greatness more surprising, not less. Modern society seems to be replete with advantages compared to Plato’s time which should make it better able to nurture the naturally gifted into great philosophers. I list a few of the most salient below:

And so on. By contrast, it is difficult to think of many factors which favor Plato’s time versus our own—they are shaky as pro tanto considerations, and seem unlikely to be similarly weighty:

The benefits of being good in the past

I suggest a better explanation of why the greatest tend to be ancient lies in how we perceive philosophical work. Even though Plato may not have been as ‘naturally’ able as the best philosophers today, and labored under several disadvantages for developing his philosophical ability, being born in the distant past gave him several advantages for his posthumous reputation.

First is low-hanging fruit. In fields like science and mathematics, one may suggest it is easier to make earlier breakthroughs versus subsequent ones: with a high school education I can solve some basic problems in Newtonian mechanics—I can’t do any ‘basic’ problems in general relativity without many years more study, and I may not be clever enough even then. Whether philosophy makes ‘progress’ in a similar way is controversial, but insofar as it does being born early with more (and relatively easier) ‘great breakthroughs’ have yet to be made is an advantage.

Second, related to the first, a mix of polymath premium and forefather effect. Given the relatively primitive and unexplored state of the field of philosophy in antiquity, there are lower heights to scale to reach the limit of human knowledge, and one can stake ones claim to much wider expanses of ground. A.N. Whitehead famously called western philosophy ‘footnotes to Plato’: this may depict Plato as a titanic genius, but may instead be driven by his being fortunate enough to live at a time where he could be the first to sweep across so much, and thus leave his successors relatively more incremental advances to make.

Third, and also related, is retroactive esteem. If one writes the locus classicus for a topic (or an entire field), this gets one a lot of exposure, and a lot of esteem. Even though modern day Aristotelian ethics goes much further than Aristotle ever did, that it all refers to his work gives him an almost mythic quality.

Does it matter if the Ancient Greats weren’t that good?

Does this matter? That ‘historical luck’ as opposed to (forgive me) some Platonic ideal of philosophical genius may have had more to do with Plato’s perceived ‘greatness’ doesn’t mean we shouldn’t regard him as a great philosopher, or Euthrythro or The Republic as great works of the western philosophical tradition. That it may be plausible that Aristotle born in modern times may not be capable of understanding, let alone contributing to the modern state of the art of Logic does not make the seminal early contributions he in fact made any less important.

But it perhaps should make us less deferential towards the ancient greats. Instead of a large secondary literature to find a good argument in Socrates’s infamous refutation of Thrasymachus near the start of The Republic, we should be more willing to believe that Socrates/Plato just made a bum argument: they were not that brilliant, and so the chances of them doing some bad philosophy is not that low. Further, if we don’t believe they are singular geniuses in human history, study of their work should be principally of historical interest: in the same way modern students of physics read contemporary introductions rather than Einstein’s original papers to understand relativity (still less process through the primary works leading up to Einstein), students who want to understand the subject matter of philosophy are better served if they make the same shortcut with modern introductions to the field and read only contemporary primary literature; similarly, we should expect the scholarship of Plato or Aristotle (or any ‘great philosopher’) to improve our understanding into the history of ideas, but not to excavate some hidden philosophical insight relevant to modern discussions.

This is also an optimistic iconoclasm. If I am right, philosophy now is vastly richer than classical Greece, the age of reason, or any other golden age we care to name: far more (and more able) philosophers with much greater ability to collaborate and learn from one another, a wider understanding of the world around us, a long history of our predecessors who have cleared the way before us, and much else besides. Many, perhaps most, universities boast a philosophy department that puts the Lyceum or the Academy to shame. Although our chances of becoming a ‘great philosopher’ have fallen, our chances of getting to the truth have risen. If Plato could have traded the former for the latter, he would have done so joyously.