The following is a guest post*  from Yann Benétreau-Dupin, a lecturer in philosophy at San Francisco State University, about an interesting and innovative response to the California State University system’s change to its general education requirements: a course on math and the arts, taught in the philosophy department. 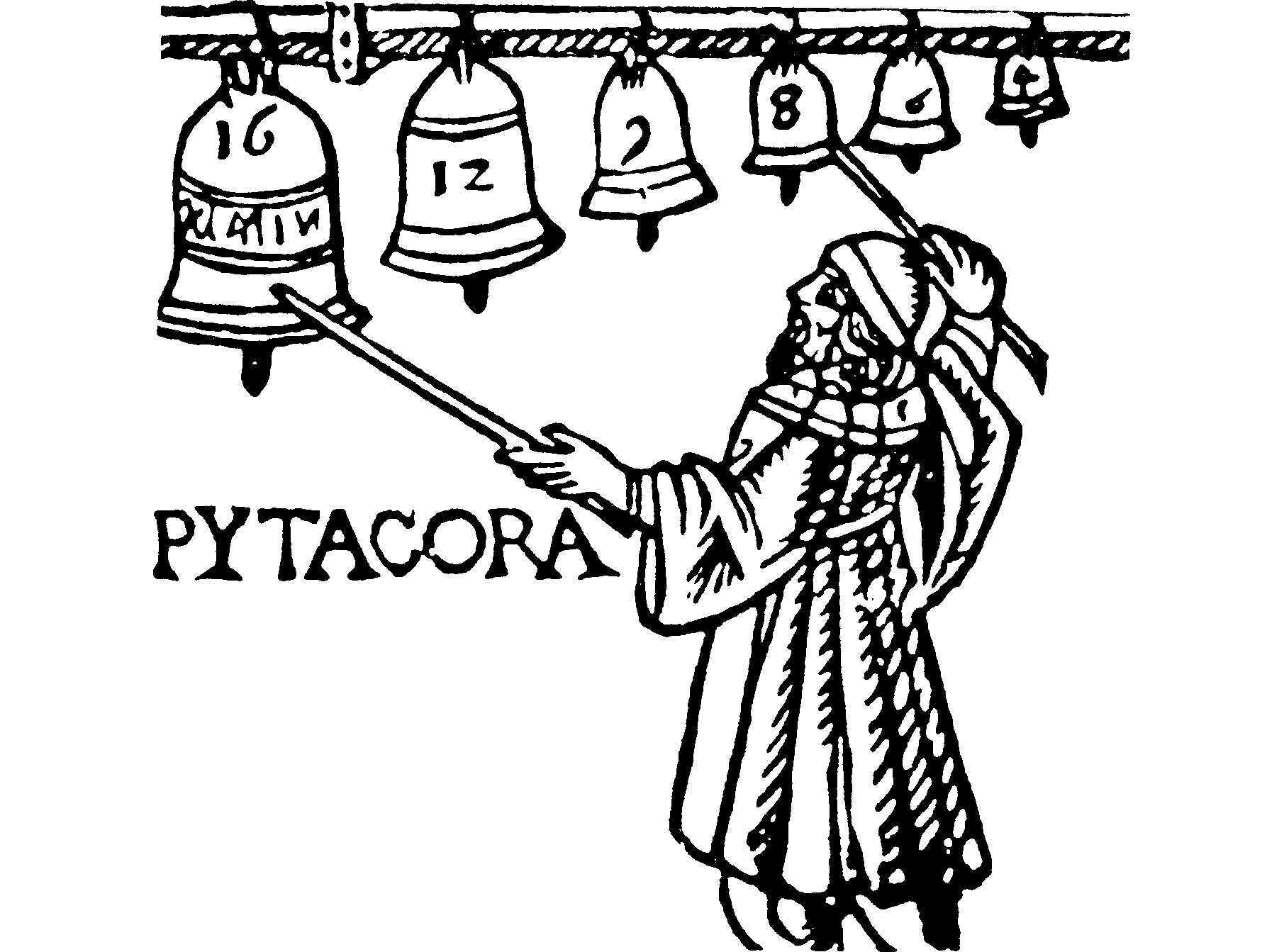 What if a philosophy department offered a math general education course for liberal arts students? This is the audacious idea the San Francisco State University (SFSU) Philosophy Department had after the California State University system decided to reform its general education math requirements. Among the changes are a push to diversify methods and contents, a more student-centered curriculum, as well as an end to demanding, for those who would need it, remedial courses prior to enrolling college-level courses. Instead, general education math courses are to be offered with additional support for those who are not “college ready” in math or stretched over two semesters.

It is in this context that SFSU Philosophy, with some input from music and art history faculty, decided to offer its own math course, titled “The Art(s) of Quantitative Reasoning.” Although I was part of the team that put together this proposal, this blog post only addresses the content, methods, and results of this course’s first iteration this past spring semester.

Last semester’s results are encouraging: it is possible for a philosophy department to offer an original non-remedial, general education math/quantitative reasoning course without prerequisite on content that non-majors will find more palatable than that offered in a traditional math course. Because this class’s content can be covered with minimal (high-school level) mathematics background knowledge, this can be viewed as an encouraging experiment in STEAM education in which philosophers can partake. Because the pedagogical approach was mostly problem-based and inquiry-based, with Socratic questioning instead of lecturing (or as a student called it, “going over all the wrong answers before getting the right one”), I am confident that this sort of courses can find a home in other Philosophy departments, albeit not without much preparation.

The approach chosen in my course was to focus on a few issues in quantitative reasoning that have shaped the history of the arts, that is, to study a few cases in the history of the arts that posed a technical—mathematical—problem and different ways to overcome this problem. The course’s two main units were the problem of musical tuning and temperament, and perspective and projective geometry in visual arts. The problem of tuning is that of a choosing a way to define a musical scale. As explained in this short video, it is impossible to design a musical scale with 12 semitones per octave (which is what we are used to) such that all four following criteria are met simultaneously:

Given that I couldn’t assume that the students would be familiar enough with square roots, powers, or even how to add or multiply fractions, the video linked earlier summarizing the problem of tuning and temperament came at the end of several weeks of instruction as a way to recap all we had previously covered.

The pedagogical approach was mostly problem-based. A large number of class meetings revolved around problem sets to be solved individually or (preferably) in small groups: often the problems would allow for different solving methods or even answers, and the students were encouraged to justify and compare their method. Outside of class time, students weren’t assigned readings but rather problem sets (6 over the semester). For instance, for the perspective and projective geometry unit, students were assigned exercises from the first part of this problem set asking them to explain and apply Albrecht Dürer’s perspective method. 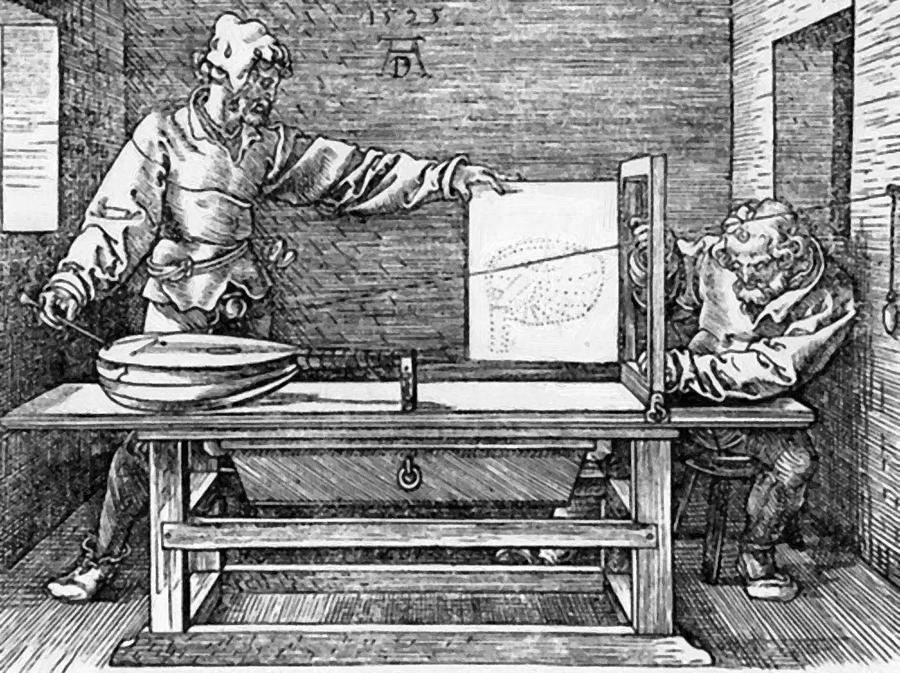 The following table gives an overview of the syllabus:

Apart from problem sets and tests, students were asked to write a 1,400-word research paper discussing the interaction between math and the arts. The choice of topic was left open: a specific artist’s oeuvre or work of art, a problem covered in class or not, or a more philosophical issue, etc. Students had to present each other in their group their topic of choice over a week before turning in their paper. Pleasantly, few students chose my suggestions of topic and resources. The papers discussed Mondrian’s oeuvre; explained why a photographer has to balance aperture, sensibility, and shutter speed; examined the reasons behind the choice of 440Hz as the “concert A”; presented the basics of tessellation and how to construct a non-repetitive infinite tiling; answered the question of whether mathematical constraints foster or hinder creativity by comparing Western and Eastern musical scales. 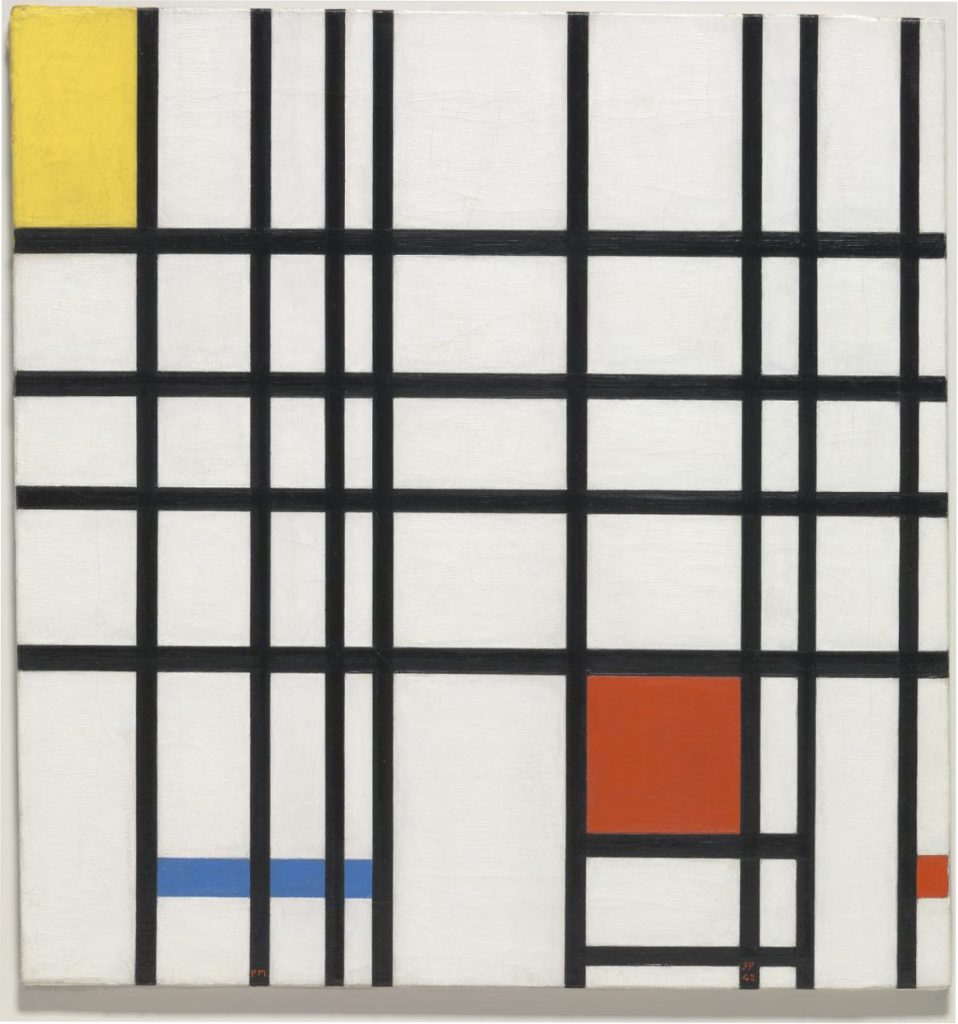 The main student learning objectives were those of the university’s math/quantitative reasoning requirement, e.g., to represent mathematical information symbolically, visually, numerically, and verbally; interpret mathematical models such as formulae, graphs, tables, and schematics, and draw inferences from them; estimate and check answers to mathematical problems in order to determine reasonableness, identify alternatives, and select optimal results, etc. These are consistent with a common-core approach. The unit on perspective allowed for more practical, concrete activities (projecting parallel real buildings’ parallel lines onto a window, drawing shadows, identifying vanishing points, etc.) than other units.

With a manageable class size (capped enrollment), groups were formed freely and remained mostly constant throughout the semester, with the only constraint that they had to include students of different level of interest—not necessarily ability—in mathematics. Grading was done anonymously. In lieu of additional remedial courses, a teaching assistant (a Philosophy MA student with a background in music and music theory) held weekly office hours (in addition to my own office hours).

The obstacles to teaching such a course were many. It requires prior knowledge in music and the arts, certainly more knowledge than I had if I had wanted this course to be more student-centered, incorporate their own knowledge and interests, and offer more tangible activities and group projects. And in order to help instructors prepare, there is unfortunately little material appropriate to this level of instruction. Several textbooks on the connection between music and mathematics exist, but they either assume much more math background than was appropriate (e.g., Benson 2007 or Roberts 2016) or else contain very little formalism (e.g., Harkleroad 2006 or Isacoff 2009). And there isn’t much audio material about tuning; you can hear for yourself here which tuning method you prefer. More teaching material is available for perspective and projective geometry (e.g., Frantz & Crannell 2011 or Dillon 2014), but little that is intended to non-majors (Professor Crannel’s course materials for majors were very useful, but I had to simplify them for this course). Unlike the musical scale unit, I taught the perspective and projective geometry unit without having to write more than one or two equations.

The choice of curriculum presented above may seem ambitious for an intro-level math course that also, in fact, doubles as a remedial course. There was no time to engage in philosophical discussion, nor even to work on writing skills for the research paper nearly as much as I would have done in a regular philosophy class.

Now, such a course’s main objective was to address non-majors, liberal arts students and offer them an opportunity to strengthen or develop their mathematical skills around topics they would find more palatable than in a traditional math course. In order to assess this, I conducted a pre/post test with the sort of questions that would help determine whether a student is “college ready” in math or not. The pre and post assessments were very similar, and neither the result nor the content of the pre-test were discussed before students took the post-test. More importantly, most of this test’s content was not explicitly covered during the semester. The following graphs show that overall students’ elementary knowledge improved, but this was much more true of those whose initial knowledge was lower, to the point where pre- and post-test results are not correlated. 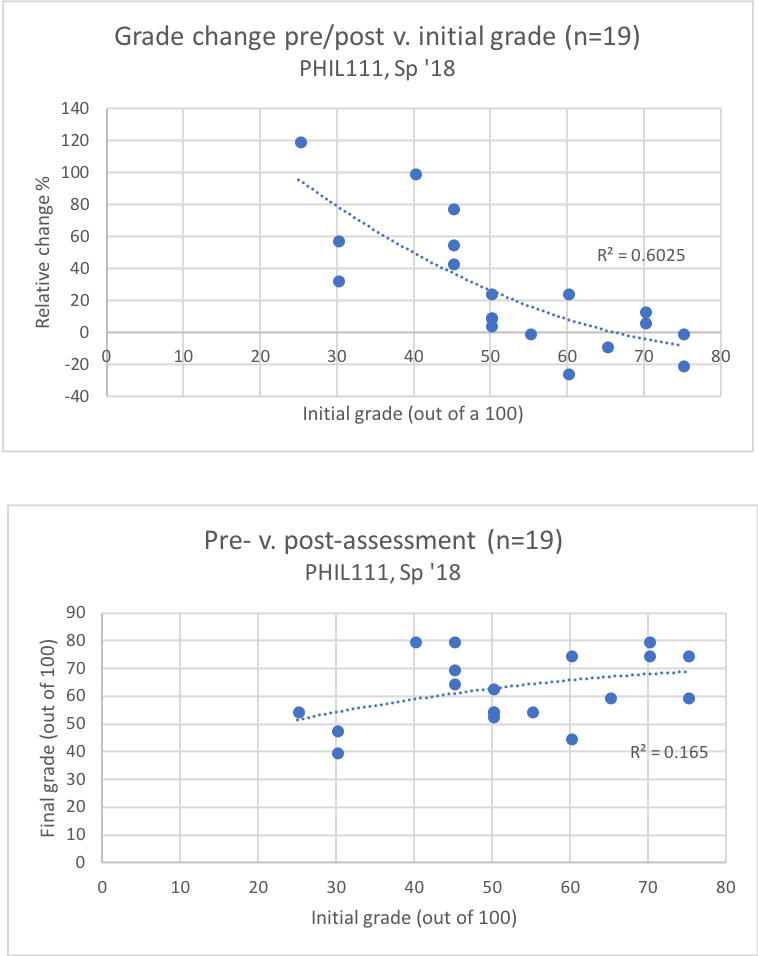 Assuming that any further analysis of the data is meaningful at all (given how small the sample size is), I found that these results depend on gender (women’s scores improved more than men’s), but not on year (e.g., no significant difference between freshmen and seniors).

This looks incredibly innovative and potentially very effective. Thanks for putting in the work to design it.Report