Michael Higgins, the president of Ireland, addressed students at the first Irish Young Philosopher Awards and called for more philosophy in college curricula, saying that “studying philosophy enables one to live with full capacity in solidarity and in cohesion with others, and that is just so very, very important,” and that “every subject that a university advertises itself will gain from its being integrated with philosophy,” according to The Irish Times.

The winner of the first Irish Young Philosopher Award is sixteen-year-old Luke Rickard, a fourth-year student at Gonzaga College Dublin. Here he is receiving the award from President Higgins: 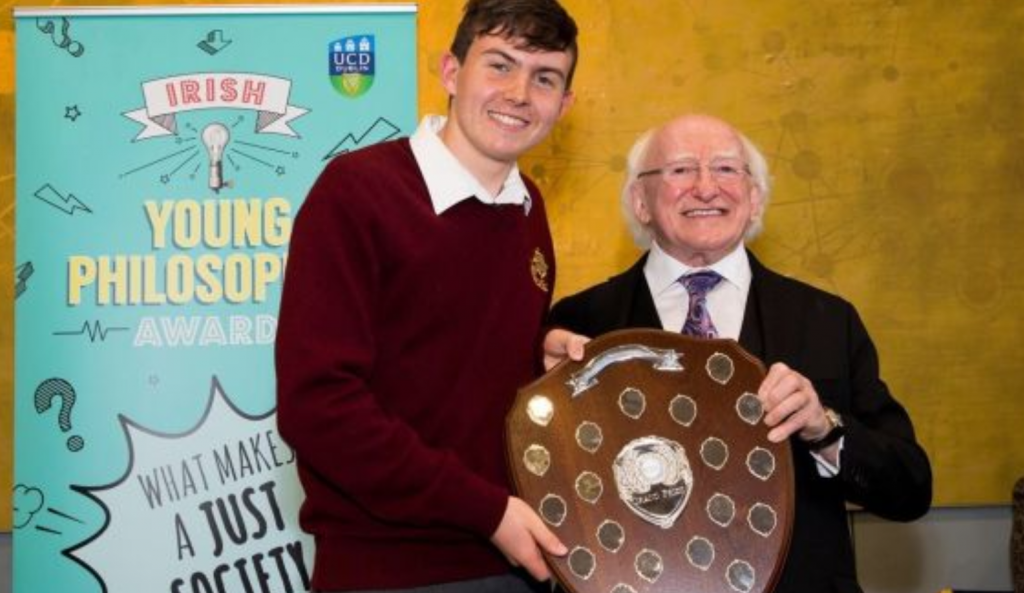 Mr. Rickard’s entry, “Is it ethical for robots to be caregivers?”, raised questions about the appropriate division of labor between robot and human caregivers for the elderly and infirm.

Entrants to the competition, which aims to encourage students to engage with philosophical ideas, are required to create a poster (or similar visual display) about their project, in addition to the “final product,” which may be in one of a variety of formats (essay, film, podcast, cartoon, slide show, etc.).

There were nearly 200 contestants.

The IYPA website, with fuller information, is https://youngphilosopherawards.ucd.ie/festival/. I’d be interested to know of any school-level philosophy competitions of similar scale.Report