The University of Leeds has told its faculty and staff that they will not be paid while on strike, and will be docked 25% for each day, after they’ve returned to work, that they fail to reschedule class time missed during the strike, according to Leeds Live. 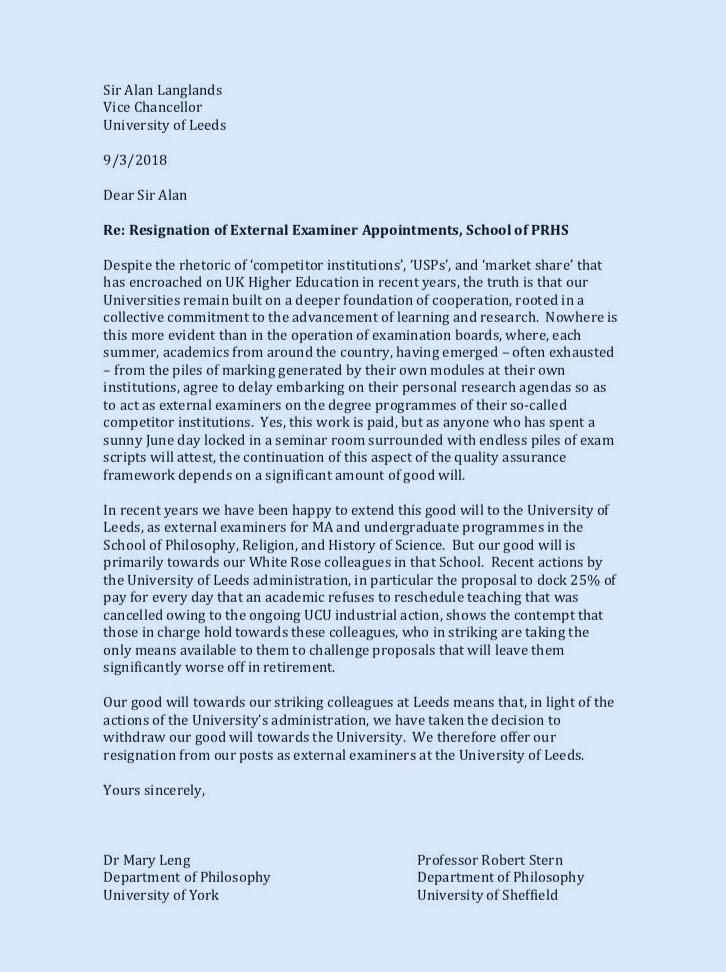 If you know of other philosophers joining with Professors Leng and Stern, or of other actions being taken by philosophers in regards to this announcement at Leeds or other aspects of the strike, please share that information in the comments.

Won’t they just hire some grad student to mark the exams and save a few bucks in the process? I guess we showed them who’s boss!Report

Yes, it’s never worth fighting for something if you’re not 100% guaranteed to come out fully in front.Report

That’s not how external examining works. External examining doesn’t involve marking exams (it involves making judgments about the overall consistency of the marking, whether it’s in line with national standards, etc.), and it needs to be done by senior academics at other institutions. So this forces Leeds to find other, senior academics to appoint for the roles (or else violate national Quality Assurance standards), which I imagine will be difficult given widespread solidarity with the department.Report

That’s right. The U.K. quality assurance framework requires that marks that go towards a student’s degree classification are signed off by an external examiner, who acts as a moderator on the whole exams process. Until an external has signed off, the University cannot award its degrees.Report

US grad who teaches in the UK
Reply to  Michael

The procedures around the awarding of undergraduate degrees are far more fair and rigorous (and yet, bureaucratic) in the UK than the US. A sample of graded work is assigned to a moderator (usually within the same department) for checking, and then a sample of *that* is given to the external examiner.Report

C
Reply to  US grad who teaches in the UK

Yes, the procedures are far more rigorous but I would use ‘overly burdensome’ instead of ‘fair’.Report

Huge respect to Leng and Stern. I hope all academics will follow their lead.

One quibble or question: would it be better to withdraw labour contingent on Leeds backing down on its threat? Resigning seems unnecessarily final to me, but I’m sure I’m simply not getting some pertinent consideration.Report

The Vice-Chancellor of the University of Leeds made it clear in an email to staff this week that he has no intention of backing down on this disgraceful threat. Hence our gratitude to Mary and Bob for taking this stance – they’ve been joined by several other externals across the institution and numerous alumni have also declared that they will no longer support the University. Negotiations between the University and College Union and the employers’ association are on-going but whatever the outcome, this hard-line approach by Leeds has significantly soured relations with staff. On a more positive note, it has boosted local union membership and brought colleagues together in solidarity on the picket lines over the past three weeks – so, ultimately, something of a counterproductive move by management …!Report

Over 300 UK academics have now resigned as external examiners as part of the continuing protest of the factors that led to the strike in the first place: https://docs.google.com/spreadsheets/d/1-2elwhGtmSZJI-WA2iIlZr_dmodeiiNMV4pDXrbKhxw/edit#gid=0Report