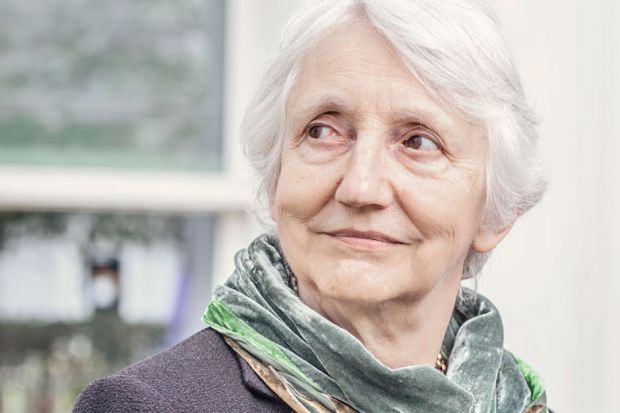 The prize “recognizes humanistic thinkers whose ideas have helped us find direction, wisdom, and improved self-understanding in a world being rapidly transformed by profound social, technological, political, cultural, and economic change.”

From the prize jury statement:

The jury is delighted to recognize Onora O’Neill as an exemplary Berggruen laureate; someone who meets impeccably the Prize’s aim to honor a philosopher “whose ideas have helped us find direction, wisdom, and improved self-understanding in a world being rapidly transformed by profound social, technological, political, cultural, and economic change.”

Onora Sylvia O’Neill, Baroness O’Neill of Bengarve, is one of the most eminent moral philosophers in the world today. Her philosophical work is a critical development of the Kantian tradition in ethics, in which she combines profound historical scholarship with a deep analysis of the central questions of moral life. Indeed, she can claim to be one of a small group of philosophers who began the modern resurrection of that tradition and have given it resonance in our present age. She has argued persuasively that moral principles must be not just applied but enacted, that duties are more fundamental than rights, and that mutual trust provides the necessary background for autonomous human lives. Her philosophical work on these issues has been deeply original, enormously influential, and of the highest quality.
Professor O’Neill is also exceptional in combining pure theory—particularly, but not solely, of the Kantian kind—with its practical enactment. As a result, her service has been both intellectual and political. She has brought the resources of philosophy to bear on questions about hunger, medical and environmental ethics, and human rights, writing lucidly and accessibly about them in ways that have helped to guide policy. But she has also served the United Kingdom as the chair of its Equality and Human Rights Commission, as chair of the Nuffield Council on Bioethics, and as a member of the Human Genetics Advisory Commission, all of which play central roles in formulating and implementing just policy. Her scholarly excellence has been recognized through appointments as the President of the British Academy, as the founding President of the British Philosophical Association, and as the current President of the Society for Applied Philosophy. Her public service has been acknowledged by many civil honors, in Britain and elsewhere, including appointment to the House of Lords.
Berggruen juror Amy Gutmann, who chaired the US Presidential Commission for the Study of Bioethical Issues, observed: “One of the most striking aspects of Onora O’Neill’s work is that it combines philosophical rigor with timely prescriptions for what we really need to do to make the human condition better.”
The prize jury included: Kwame Anthony Appiah (NYU), Leszek Borysiewicz (Cambridge), Antonio Damasio (USC), Amy Gutmann (U Penn), Amartya Sen (Harvard), Alison Simmons (Harvard), Michael Spence (NYU), Wang Hui (Tsinghua), and George Yeo (former Foreign Minister of Singapore).
Professor O’Neill also won the Holberg Prize this year, which includes a 4.5 million Norwegian kroner (approximately $523,000) prize.
This was the second time the Berggruen Prize was awarded. Its first winner, last year, was Charles Taylor.
The Philosophy and Culture Center at The Berggruen Institute is a non-profit organization that aims to
explore the origins and development of thought; clarify consensus and divergence among different philosophical traditions; and stimulate new developments within and across traditions as well as develop new and original philosophical thinking. We will compare both ideals and traditions as practiced in everyday life over time and look at philosophy as a way of life in different cultures. As an independent Institute we aim to empower risk taking with ideas and change. We are at the service of ideas and we are willing to go where others are not.
Nominations for the 2018 Berggruen Prize open in February.
Login
0 Comments
Inline Feedbacks
View all comments
Paid Advertisements