A site called Match College lists philosophy as the 89th most popular major. It comes in just after “Baking and Pastry” and “Respiratory Therapy,” which is perfect, because if true I will need to take some deep breaths and console myself with a piece of cake. 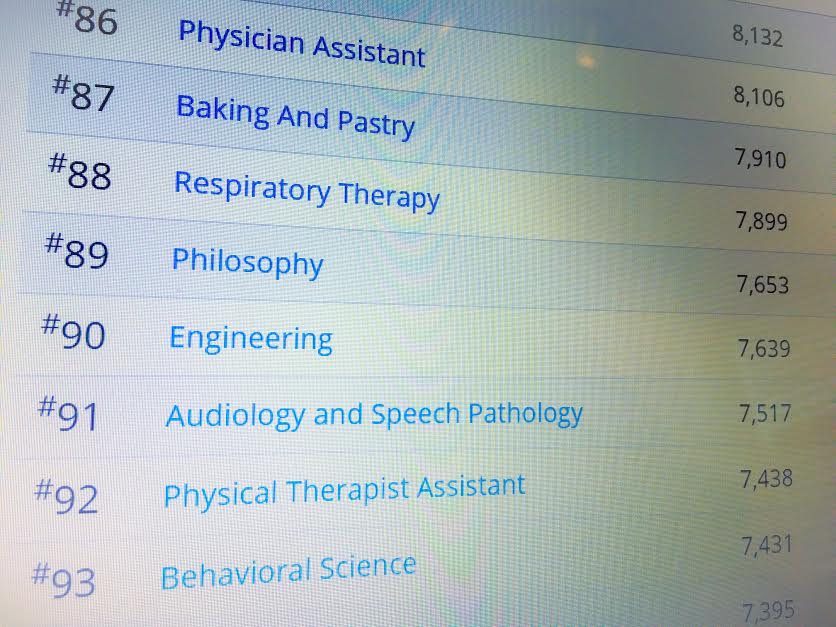 At least philosophy has more majors than engineering. Wait, what?

The list (which I came across via the article about philosophical consulting discussed here) says that it is based on data from the National Center for Education Statistics’ Integrated Postsecondary Education Data System (IPEDS).

At that site, I found the table “Bachelor’s Degrees Conferred by Postsecondary Institutions, by Field of Study.” There are only 33 categories listed there, and “philosophy and religious studies” (still), in the last year for which they present data (2014-15), has the 23rd highest number of majors. So where is College Match’s ranking of 89th coming from? I’ve sent them an email inquiring about it, but if any intrepid readers can figure it out, please enlighten us.

UPDATE: A few readers have provided alternative sources of information that suggest—if we weren’t already skeptical—that the Match College information is not accurate. Robert B. Townsend of the American Academy of Arts & Sciences writes:

The numbers aren’t nearly that dire for philosophy. There are quite a few ways of tabulating the numbers. Just using the public data system for degrees, I pulled out the attached counts for the most recent three years using a more detailed filter. As you can see, philosophy comes out considerably higher—56 out of 332 majors over the most recent three years. And that does not include about a thousand more students who majored in “philosophy and religion” and ethics, which are tabulated separately.

He created a spreadsheet ranking college majors by popularity over the past three years. Below is a shot of the top 65. 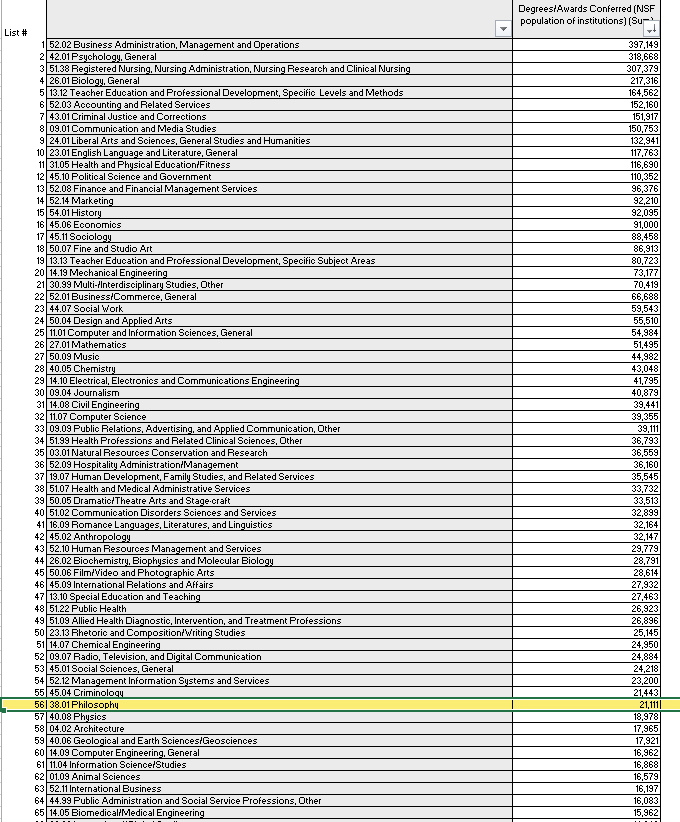 Philosophy falls just after criminology and just before physics. Neither “Baking and Pastry” nor “Respiratory Therapy” come out ahead of philosophy. So you can breathe easy. And perhaps have a piece of cake to celebrate.

See also the helpful comment from Robert Birdsall, below.

The data does not come from IPEDS. Rather, the site drew the data from a site identified as the “Economic Development and Employer Planning System” or EPEDS. The EPEDS site cites the NCES table “National Center for Educational Statistics, Degrees Conferred 2014-15”, as its source.

The MatchCollege site appears to primarily a means of collecting email addresses of unwitting visitors and then sell off these addresses to unidentified marketers. Much of the content appears to be bot-created using keyword algorithms to generate data formatted into tables. Just leafing through the MatchCollege site and finding any number of inaccuracies gives the impression that accuracy is not the site’s primary virtue.

I knew I should have double majored in philosophy and pastries!Report

how’s the pastry job market? asking for a friend…Report

Philosophy less popular than pastry-baking? Eat your heart out, Gorgias!Report

Well I made no dough from doing philosophy…
😉Report