Inside Higher Ed today discusses a report by the American Association of University Professors (AAUP) on faculty cuts at the College of St. Rose (previously). A number of faculty were let go, leading the AAUP to declare that at the College, tenure is “virtually meaningless.” Among the programs affected is philosophy: 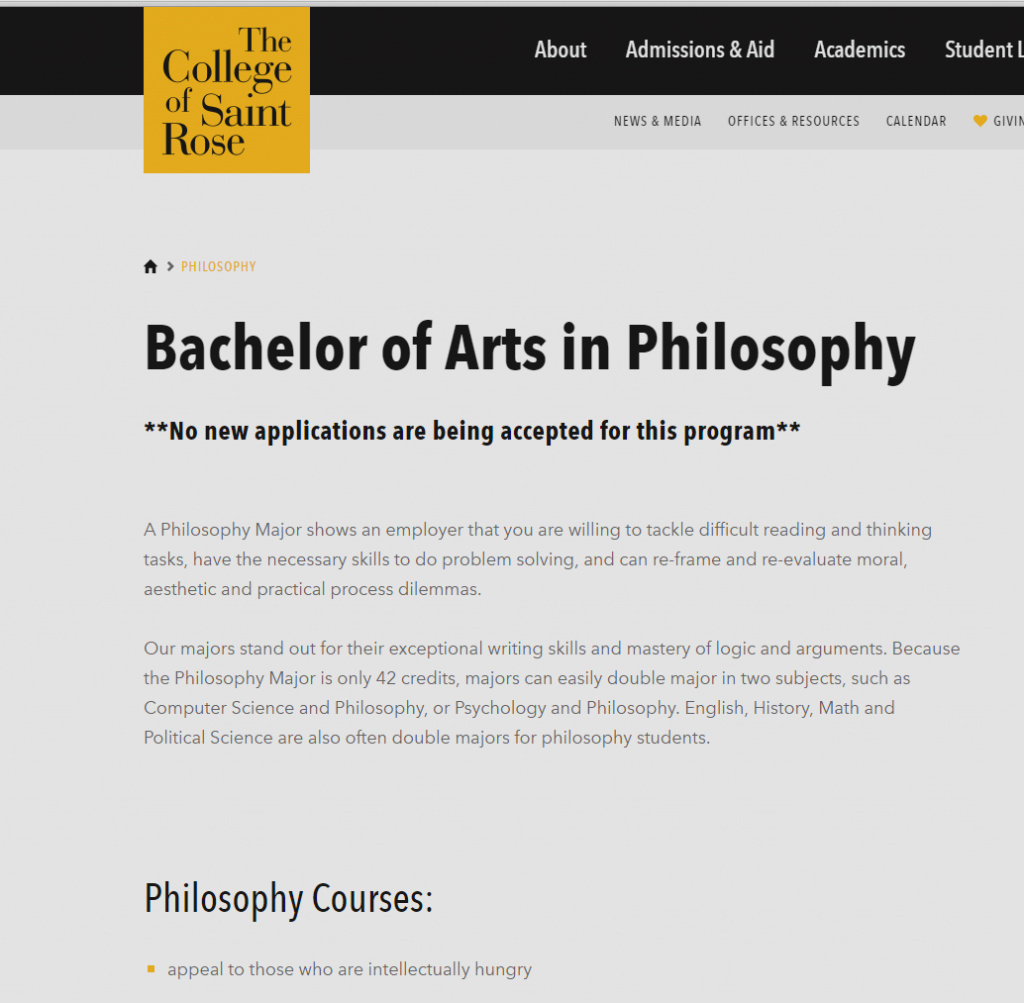 This is not the first time a philosophy major has been on the chopping block, and with it being increasingly dismissed by politicians (despite admirable pushback from many philosophers), we can probably safely predict that it won’t be the last. If your major or department is threatened, what, if anything, can be done?

For starters, get attention. We’ve seen, recently, how philosophers across different institutions can work together to support one another, once the information is made public. So if there is trouble coming your way at your school, don’t wait until it is too late to let the rest of us know. Send me an email about it. A post here at Daily Nous about your situation will reach several thousand philosophers, some of whom may have useful ideas or suggestions, or personal reasons for being motivated to help.

Also, contact the American Philosophical Association (APA), which, Executive Director Amy Ferrer reports, “privately sent letters to a number of institutions in response to proposed cuts to or closures of philosophy departments.”

Some people might be reluctant to write in because they think that they or their institutions are not in some way or another sufficiently important. Yes, there is elitism in our profession, but it does not seem to come into play in responses to the kind of situation. So forget that, and let your fellow philosophers help you, if we can.

In the Spring of 2009, President William Thierfelder announced that the Board of Trustees had mandated an examination of academic programs at the Abbey in light of financial concerns (it has always been the case that BAC suffers from extreme financial insecurity.) Despite repeated requests from the faculty, it was never revealed how this “examination” (which most of us realized was just a euphemism for making cuts to faculty) would place the Abbey on any kind of securer financial footing. An ad hoc committee was hastily assembled to meet over the summer to carry out this “examination.” The committee was organized and controlled by the Academic Dean, Carson Daly, whose name should be familiar to readers of this blog since she just recently resigned as President of Mount Saint Mary’s College in New York, after firing faculty there.

Long story short, it was obvious to me that both Thierfelder and Daly intended all along to eliminate the philosophy department and its faculty, and that all of this was just a cover (Daly’s constant trying to have votes on whether to eliminate the philosophy department during meetings of this committee without any warning was certainly a clue) . Despite her constant maneuverings, both the committee and later the Faculty Assembly voted to keep the philosophy major and the philosophy requirement in the core curriculum. Still, she misrepresented the will of these two bodies in her presentation to the Board of Trustees and had philosophy eliminated. When inquiries were made as to how a Catholic college could eliminate all philosophy from its academic offerings, Abbot Placid Solari, Chancellor of the college, responded that of course, there was still philosophy since the Political Science department would be offering required political philosophy courses in the core! Yet those of us in the philosophy department were told that either we didn’t have the credentials to teach these courses, or that there no need for extra faculty (the college hired another political science professor that fall).

Fast forward to this year when BAC announced that it would starting a minor Catholic seminary, which be offering the philosophy background required of a minor Catholic seminary. Obviously, the political philosophy classes currently being taught don’t fit that bill, because supposedly someone is being placed “in house” (the seminarians will be residing at a former convent at a nearby parish) to teach them philosophy. Needless to say, this individual is a priest with a questionable background in philosophy.

I would really like to see the APA or some kind of representative organization conduct a formal documentation of this case and the others like it.Report