About five years ago I posted about philosophical dialogues, but I recently received a question about them that wasn’t taken up in that post, or by those responding to it. 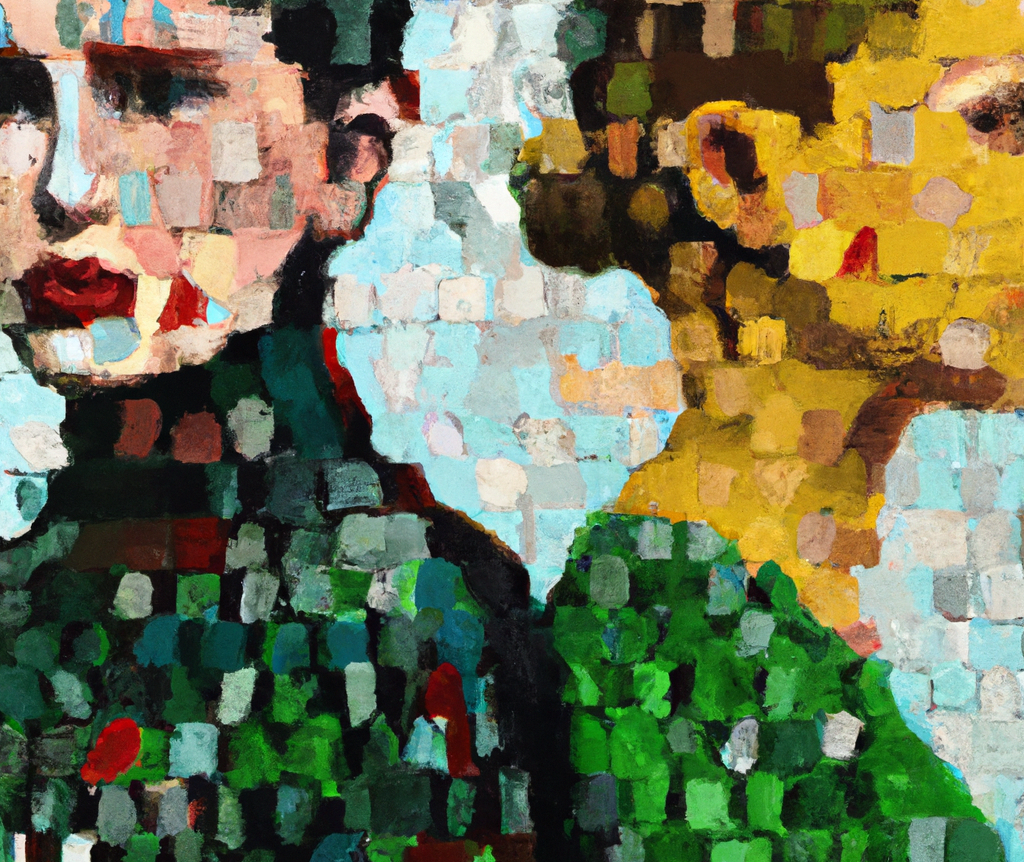 [image made with DALL-E]

I’m thinking of putting together a freshman philosophy class where we only read dialogues because it’s a great way to read philosophy! I know of the classic dialogues from the Western canon, but a) I know nothing of dialogues from non-Western traditions and b) I don’t know of dialogues by women. I wonder if your readers could help?

I bet you can. Thanks in advance for your suggestions.

The Questions of King Milinda, Vol. 1 of 2 (Classic Reprint) https://amzn.eu/7YHypXwReport

It’s not a dialog in exactly the same sense as Plato (or Berkeley) but the Bhagavad-Gita is a sort of dialog between Krishna and Arjuna. You’d want to edited it down to get the parts you found most philosophically relevant, but that could be done.Report

I would suggest Keya Maitra’s most recent translation and introduction to the Gītā, Philosophy of the Bhagavad Gita: A Contemporary Introduction, if someone did want to excerpt it (which I personally find challenging as the work is a cohesive narrative whole and not really a set of discrete arguments).Report

The play “Much Ado About Religion” (Āgamaḍambara) could be paired with Parimal Patil’s “Against a Hindu God” and other material on Indian philosophy (it includes Jain, Buddhist, and Nyāya philosophers as well as the materialist Cārvākas).

Its author, Jayanta Bhaṭṭa, is a Nyāya philosopher: https://nyupress.org/9780814719794/much-ado-about-religion/Report

Steffi and David Lewis, “Holes”. (By a woman and a man, undergrads tend to enjoy it!)Report

Oh, and to add: dialogues involving women (characters) from the Indian tradition could include the Bṛhadāraṇyaka Upaṇiṣad and Gārgi’s debate with Yājñavalkya as well as sections of the Mahābhārata including Draupadī. She is present in several pivotal dialogues. Brian Black’s work is useful for the background here.Report

Large portions of the Zhuangzi are written as small dialogues, usually between a ”teacher” and a student. The teacher might be Zhuangzi, or Confucius, or a carpenter, etc. I think a lot of these would make great reads for a freshman class. The whole text is in Past Masters. Here’s a famous little fragment, from “Enjoyment of Untroubled Ease”:

Huizi said to Zhuangzi, ‘I have a large tree, which men call the Ailantus. Its trunk swells out to a large size, but is not fit for a carpenter to apply his line to it; its smaller branches are knotted and crooked, so that the disk and square cannot be used on them. Though planted on the wayside, a builder would not turn his head to look at it. Now your words, Sir, are great, but of no use – all unite in putting them away from them.’ Zhuangzi replied, ‘Have you never seen a wildcat or a weasel? There it lies, crouching and low, till the wanderer approaches; east and west it leaps about, avoiding neither what is high nor what is low, till it is caught in a trap, or dies in a net. Again there is the Yak, so large that it is like a cloud hanging in the sky. It is large indeed, but it cannot catch mice. You, Sir, have a large tree and are troubled because it is of no use – why do you not plant it in a tract where there is nothing else, or in a wide and barren wild? There you might saunter idly by its side, or in the enjoyment of untroubled ease sleep beneath it. Neither bill nor axe would shorten its existence; there would be nothing to injure it. What is there in its uselessness to cause you distress?’Report

If I may, my most recent book may be of interest, which consists entirely of dialogues, with, among others, many of them with women philosophers (Christine Overall, Jane Heal, Alison Stone, Holly Lawford-Smith, Elaine Scarry, Panayiota Vassilopoulou, and Helen Steward) The Things That Really Matter. Philosophical Conversations on the Cornerstones of Life.Report

The Analects of Confucius, as well as the Mengzi (Mencius), are made up of lots of little stories, many of which are dialogues (although some are just one-line sayings). The standard anthology is “Readings in Classical Chinese Philosophy” edited by Phillip Ivanhoe and Bryan van Norden (this would also contain excerpts from the Zhuangzi, which was mentioned by another commenter). There are also full translations by the same people who did the excerpts for that anthology, namely Edward Slingerland for Confucius and Bryan van Norden for Mencius. All this is published by Hackett.

If you wanted just one, Mencius 1A7 is a famous dialogue between Mencius and King Xuan, where Mencius tries to get King Xuan to be a more compassionate ruler by “extending” the compassion he has for an ox to his people.

The Four-Seven Debate in Korean Neo-Confucianism.Report

D.S. Margouliath, “The Discussion Between Abu Bishr Matta and Abu Sa’id al-Sirafi on the Merits of Logic and Grammar,” Journal of the Royal Asiatic Society (1905), 79-129.

Great episode featuring this on this on History of Philosophy w/o Any Gaps: https://historyofphilosophy.net/baghdad-schoolReport

I recommend “Free and Easy Conversing,” a dialogue by Liam Kofi Bright and Aaron Novick about Zhuangzi’s epistemology. There’s a written version, though some folks at the University of Toronto also adapted it into a helpful animated video: https://youtu.be/hm3W6-jFKUEReport

The second chapter of Mary Hesse’s Models and Analogies in Science is an extended dialogue between a Campbellian and a Duhemist.Report

Might you happen to have a copy of this? I don’t know that I can access it at the site you linked to (though I might just not be seeing the relevant button).Report

Potentially off-topic but if you’re willing to take letters as constituting dialogue, some very influential women who wrote a lot of them, such as Madame de Sevigné or Madame de Staël. Plays by Olympe de Gouges might also be interesting to look at.

I realize that’s not extremely helpful. Lots of fascinating stuff in the comments though.Report

I also second Gargi’s dialogue in the Great Forest Upanishad.Report

Thanks Justin for posting my query and thanks to everyone who has contributed. This is all extremely helpful! I really appreciate it.Report

You should most certainly check out Dialogues on Disability.
Here’s my latest interview: https://biopoliticalphilosophy.com/2022/02/16/dialogues-on-disability-shelley-tremain-interviews-mich-ciurria/Report

If co-authorship counts, “Holes” by David and Stephanie Lewis would be an instance of b.Report

In “New Voyages to North America” by the Baron de Lahontan there is a dialogue between a fictionalized version of Lahontan and an Indigenous philosopher called “Adario.” There is evidence that the character Adario is based on the historical Wendat leader Kondiaronk, who Lahontan likely met while in North America – Adario was one of his titles. (Georges Sioui has an excellent chapter on this in his book “An Amerindian Autohistory” which I’d recommend for context).

The contents of the dialogue cover ethics, philosophy of mind, religion, and philosophy of law, among other things. So, probably something applicable in there.Report

I recently taught “ dialogue on the infinity of love” by Tullia D ‘ Aragona -a renaissance Italian thinker – and I think it worked well!Report

Gregory of Nyssa’s dialogue ‘On the Soul and Resurrection’ is a fantastic read. It’s set after the death of his best friend, Basil, with Basil’s sister, Macrina, cast as the wise teacher. Gregory himself plays something of the devil’s advocate. It also has the dual advantage of being (1) short and (2) extremely lively – Macrina and Gregory interrupt each other and constantly object to one another. No ‘yes, Socrates’, or ‘of course, Socrates’ in this one.Report

Regarding honesty I suggest Onoria O’Neil on Trust and trustworthynessReport

Muhammad Ali Khalidi offered 5 dialogue suggestions in his interview at 3:16AM. 2, 3, and 5 are ‘beyond the usual suspects’:

This is a really cool approach. I have done something like this using An Unconventional History of Western Philosophy Conversations Between Men and Women Philosophers (2008), edited by Karen Warren. I pair it with the History of Philosophy without any Gaps book series / podcast.
To make things even more fun, each lecture is recorded as a p4c -style dialogue-based podcast interview, with some music and commentary. We then discuss the texts / interview together in class.
As for specific suggestions on Non-Western approaches, there are many wonderful Buddhist dialogues. I highly recommend Dōgen.
Dr. Johnathan Flowers has several wonderful papers on Dōgen, aesthetics, AI & Medical Ethics, and Pragmatism.Report

Thomas Hobbes’s important yet comparatively neglected work, A Dialogue between a Philosopher and a Student of the Common Laws of England (among his later writings, first published posthumously in 1681). In addition to Leviathan and other writings by Hobbes, this book-length treatment of law is central to Larry May’s brilliant study, Limiting Leviathan: Hobbes on Law and International Affairs (Oxford University Press, 2013). For anyone not familiar with his work, and among other accolades, May is arguably our foremost philosopher of international criminal law.Report

Well, it is not non-Western and the participants are all male but the first half of my paper ‘Complots of Mischief’ is a dialogue in blank verse between Coriolanus who rightly believes the he has been the victim of a conspiracy (‘It is a purposed thing an grows by plot/ To curb the power of the nobility’) and two contemporary philosophers Steve Clarke and Brian Keeley who try to persuade him on philosophical grounds that conspiracy theories should be generally discounted. The tough part was staying in character as the haughty, choleric and not very intellectual Coriolanus whilst giving him enough nous to answer Keeley and Clarke both of whom are gifted philosophers. If you were teaching it , you could have a lot of fun situating it in the context of Shakespeare’s play and the psychological situationism to which Steve Clarke appeals.Report