M: Hey. I wanted to tell you that I think it would be great to bring back the philosophical dialogue.

J: Funny—I just yesterday posted in the Heap of Links a dialogue that University of Colorado philosopher Michael Huemer recently wrote. It’s a four-part series of conversations about the morality of eating meat—“Dialogues on Ethical Vegetarianism” [that is a link to the first part; here are the others: two, three, four].

J: Ah, ok. I thought maybe for a second you didn’t obsessively follow my blog.

M: I wish. I spend an imprudently significant amount of time on your blog.

M: Anyway, I was wondering why we don’t have more philosophy written in dialogue form. It’s easy to follow. It shows the back-and-forth of philosophical argument. Frankly, it’s more fun to read.

J: Provided the author doesn’t give anyone an extended monologue. Sometimes you have to wonder what Plato was thinking.

M: Yeah. Socrates can just go on and on sometimes. No one interrupted him because he put them all to sleep!

M: Just one more way he is the father of philosophy.

J: Huemer, thankfully, doesn’t have his characters give any speeches.

M: Yeah, and you know, something like this could be done on any topic. It could even be a book series, something aimed at the public, or students, but not necessarily just for them. Or maybe a journal article, even.

J: Right. There are some recent dialogues. John Perry’s “Dialogue on Personal Identity and Immortality.”

M: The Grasshopper, by Suits.

J: They are closer in time to us than they are to Plato.

M: Irrelevant. But on that, do you want to feel old?

M: Tough. Did you know that Radiohead’s OK Computer is 20 years old?

M: Yeah, and it is farther away in the past from us now than the Beatles were when we were kids.

J: Thanks for that. Did you know that Steely Dan’s Aja is 40 years old?

J: So what other recent philosophical dialogues are there?

M: I don’t know. You should ask about it on Daily Nous. Maybe get a list going.

M: And ask whether people would write them, or what topics they’d want to see a dialogue treatment of. And whether they’d use them in their courses.

J: Sounds good. Thanks for the suggestion.

J: Where you headed?

J: What’s your case? Who are you prosecuting?

J: Why? Is it someone who is going to escape from jail before you get him in court?

J: Your father? How is that not a conflict of interest?

M: I know. This court has strange rules. 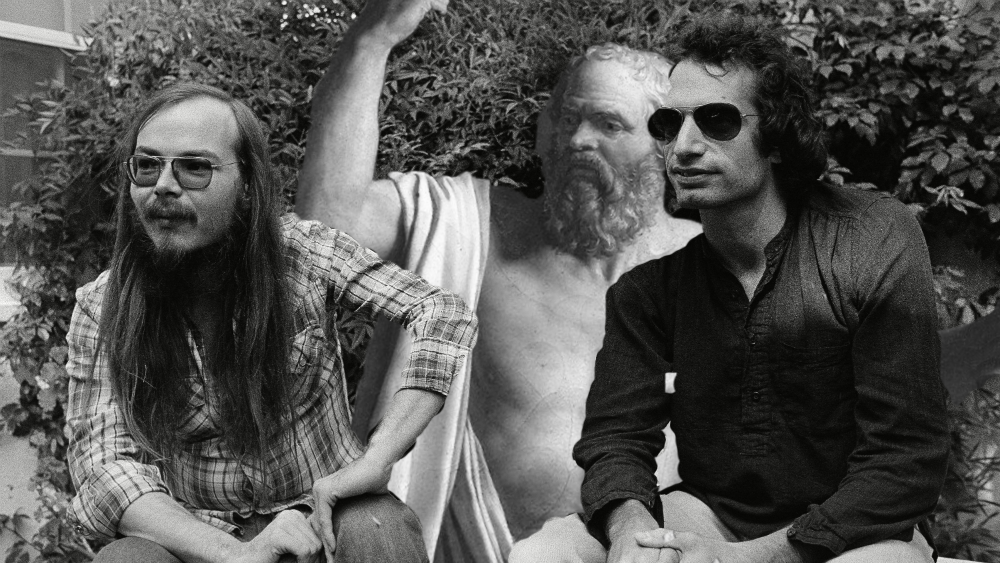 Gah! Of course. Can’t believe that slipped my mind. http://amzn.to/2kvpTMaReport

I’m a fan of Matthew Silliman’s _Sentience and Sensibility_, myself.
http://amzn.to/2jrlnedReport

I also quite like Sentience and Sensibility. Matt is one of the few philosophers I know of today that publishes almost exclusively in dialogue. He has also co-authored two other dialogues with David K. Johnson, “Bridges to Autonomy,” and “Bridges to the World.” (both available on Amazon)Report

Rowman & LIttlefield had a series called “New Dialogues in Philosophy” a few years back. I’m not sure if the series in still active.Report

One of my favorites is Larry Laudan’s Science and Relativism. Also Philip Kitcher and a Evelyn Fox Keller’s book on climate change The Seasons Alter is good.Report

I, similar to Jay, really enjoyed Kitcher and Keller’s book and would recommend it to anyone looking for an accessible introduction to climate change.Report

I’ve taught Introduction to Philosophy with dialogues (and the student papers were dialogues as well). I’ve used:

(2) Does God Exist? A Dialogue on the Proofs for God’s Existence

(3) A Dialogue on Personal Identity and Immortality

(4) Mind and Brain: A Dialogue on the Mind-Body Problem

(5) Dialogues on the Ethics of Capital Punishment

(7) Can Animals and Machines Be Persons? A Dialogue

(8) Dialogue on Good, Evil, and the Existence of God

(9) Who’s to Say? A Dialogue on Relativism

(10) Dialogues on Relativism, Absolutism, and Beyond: Four Days in India

(12) The Metaphysics of Time: A Dialogue

(13) A Dialogue on Consciousness

(14) A Dialogue on Free Will and Science

(15) Free Will and Determinism: A Dialogue

(17) Evolution and Religion: A Dialogue

A book-length dialogue on skepticism by Eli Hirsch is coming out at the end of this month:
https://www.amazon.com/Radical-Skepticism-Shadow-Doubt-Philosophical/dp/1350033855Report

How about ‘Holes’, a dialogue between Argle and Bargle, by David and Stephanie Lewis?Report

Stalnaker’s “Impossibilities”, with his characters Will and Louis being sympathetic to views of Bill Lycan and David Lewis, respectively, is one that comes to mind. And the classic David and Steffi Lewis paper “Holes” is one of my favourites.Report

not actually a metaphysics fan though!

Peter Kreeft (Catholic philosopher) has a number of books that are Socratic dialogues.Report

Max Black’s “The Identity of Indiscernibles.”Report

Michael Smith’s “Ethics and the A Priori: A Modern Parable” is a wonderful little dialogue on metaethics.Report

I recently wrote one to deal with some doubts that were creeping in when I was planning a paper which was going to take a particular side on the relevant issue:
http://sprachlogik.blogspot.com/2017/09/a-dialogue-on-mathematical-propositions.html

I think it can be good for that. But I think I will still go on to try to write the paper in non-dialogue form.

However: I will have a section of objections and replies. And I think these sections, very common in papers, are often a kind of dialogue portion of the paper, albeit usually without a lot of back and forth. I think that’s worth keeping in mind when trying to assess how much the form is used in philosophy.Report

Feyerabend’s _Three Dialogues on Knowledge_, from 1991, is a pretty good read.Report

Lewis Carroll’s “What the Tortoise Said to Achilles”, a short paper in Mind from 1895.Report

And Doug Hofstadter’s homages in “Godel, Escher, Bach” and “the mind’s ‘I'”Report

I have been trying to publish a dialog that’s been rejected at three journals. Some referees have recommended publication. The others have, without fail, said that they found the writing excellent and the argument easy to follow, but suggested that the subject would be treated better in a “traditional” style of presentation.Report

I find most philosophical dialogues just terrible. Besides Plato and Augustine, I have yet to read one that would not have been served better by a regular presentation. They should not be written by people who have no literary skills and can’t make a point of using the form – by which I do not mean simply that they can write a nice sentence or present opposing arguments. For example, Suits’ Grasshopper I find in places unreadable and pointless, Perry’s is just boring.Report

While I’m not a great fan of the dialogue format, I’ve taught from Daniel Bell’s Communitarianism and Its Critics several times; it’s a book-length dialogue between two Ph.D. students. One nice feature is that Will Kymlicka served as a reviewer for the book and wrote a dialogue for his report, which is included in the text, along with another dialogue from Bell as a rejoinder. It was the best text that I could find to introduce communitarianism to students, back when we used to talk about communitarianism, but it exemplifies what I think is problematic about the format: there’s a character in the book who purports to be the critic of Bell’s position, but who is a very weak critic (and who is saddled with various unattractive personal characteristics in addition to poor arguments). So while students are prone to think that they are hearing the best criticisms of the position that might be offered, in fact they’re getting a strawman. (The appendix by Kymlicka rectifies some of this.) I’d like to see more exchanges between philosophers with competing views, but I’m not necessarily keen for more dialogues written by individual philosophers.Report

I’m surprised that no one has mentioned the Copleston/Russell debate on the cosmological argument. It has the advantage of being an actual dialogue where two very smart people really are defending their own views.

Also, I would, tongue only slightly in cheek, mention Kierkegaard’s Either/Or. It is a dialogue after all it’s just that each interlocutor gets to speak for a few hundred pages.

Honestly though, I tend to agree with some other posters comments about most dialogues . They tend to be incredibly wooden and, worse, really slanted, but they present themselves as though they’re an evenhanded presentation of the arguments. Perry’s “Dialogue on Immortality” for instance makes it seem like you’d have to be an incredible idiot to believe any form of dualism and the minister figure in that one is unbelievably dumb in pretty much all his arguments. I love the idea of dialogues but they are so hard to pull off.Report

David Albert, “The difference between the past and the future” (in *After Physics*) is a dialogue between Jedidiah and Huckleberry about the direction of time.

Jim Wooward, “Interventionism and the missing metaphysics” (in *Metaphysics and the Philosophy of Science: New Essays*) is a dialogue between Woodward and a Professor Metafisico.Report

Amazing that there has been no mention so far of Lakatos’s Proofs and Refutations, surely the greatest philosophical dialogue of modern times. Much less amazing is that nobody has mentioned my own ‘Complots of Mischief’, the first half of which is a philosophical dialogue in blank verse in which my views on conspiracy theories are represented by Shakespeare’s Coriolanus (though the Roman patriotism, the militarism, the class chauvinism, the aristocratic hauteur and the unhealthy fixation with his mother are all down to him).Report