Oxford University Press (OUP) has responded to an open letter circulated earlier this month (the first letter covered in this post) that voiced concerns about its decision to publish next month a book about gender-critical feminism by philosophy professor Holly Lawford-Smith (Melbourne).

The letter, signed by David Clark, Managing Director of Academic Publications for OUP, replied to questions raised in the letter about the review process Lawford-Smith’s book underwent:

Every academic title published by OUP is assessed by the Delegates of the Press, and undergoes a rigorous review process to ensure the quality of the scholarship we publish. This book is no exception. It was thoroughly reviewed, including a round of supplementary reviews with experts in particular areas. Due to the confidential nature of the process, we cannot share details of who those reviewers were, but we trust them to have reached balanced judgements based on their expertise.

Clark notes the contentiousness of the topic, and frames OUP’s role as one of facilitating academic discussion of it:

We recognize that there is considerable and passionate debate about some of the positions held by gender critical feminists and their perspectives on a variety of issues. We are confident that Gender Critical Feminism offers a serious and rigorous academic representation of this school of feminist thought. As you rightly state, we have also published other titles on topics such as transgender rights and tackling prejudice, to further contribute to academic debate. We will continue to represent a wide range of feminist philosophy in our publishing and a wide range of books on philosophy and gender, featuring authors who are trans and gender non-conforming.

He adds that OUP’s decision to publish any particular work is not thereby an endorsement of the views defended therein:

I would also like to clarify that the Press does not advocate through its publications for any particular views, political positions, or ideologies. Equally, what we publish is not reflective of—nor influenced by—the personal views of our employees.

I appreciate that what I have said may not address all of your concerns, but I hope you can see that our mission—and our commitment to publishing a breadth of views and perspectives to inspire academic debate—continue to guide our work, as they have since we were first founded.

The whole letter is below: 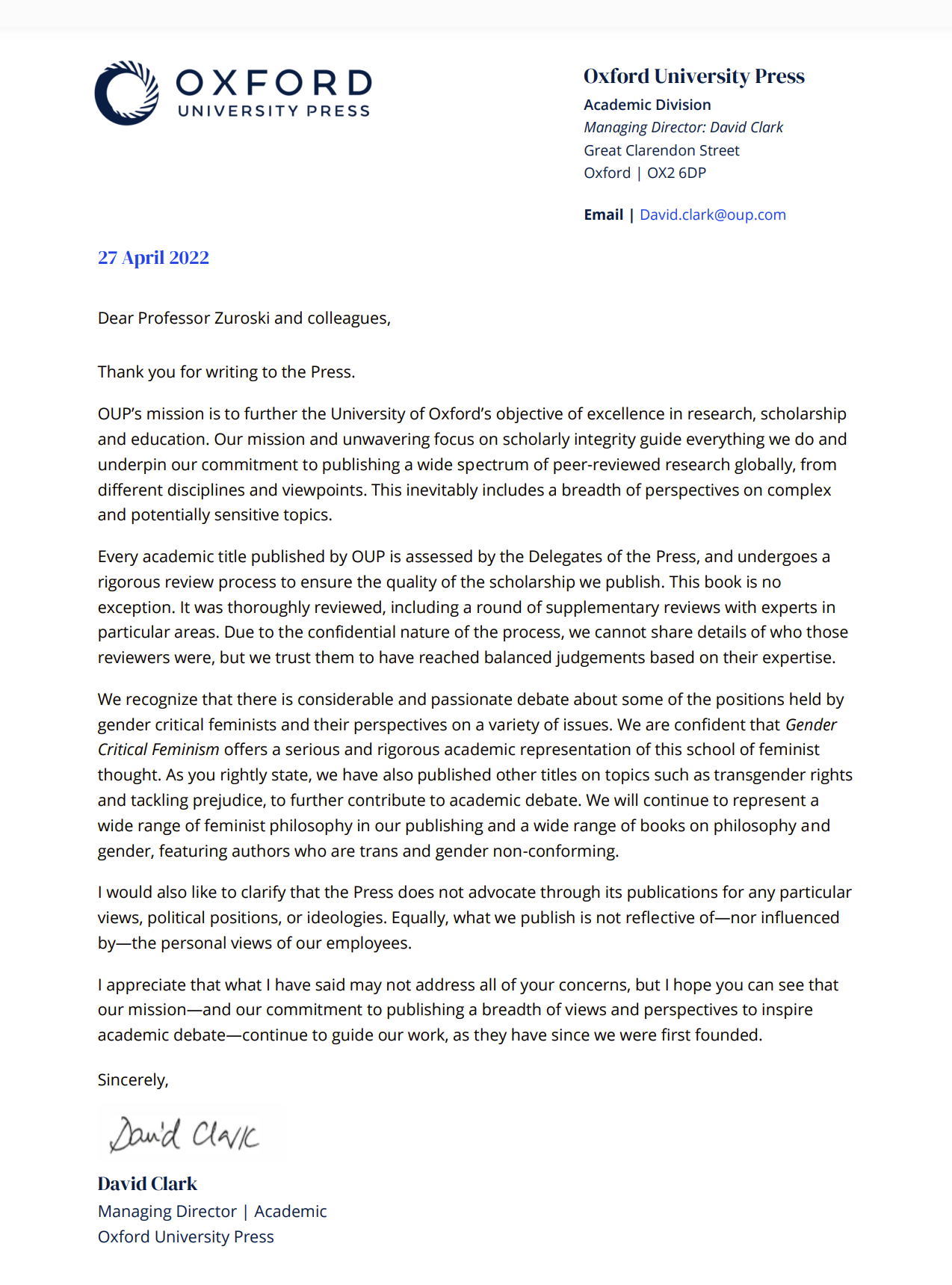 UPDATE – My two cents: This letter seems mostly like the right kind of response. Not all publishers aim for a kind of neutral facilitation of quality-controlled inquiry but OUP and most other academic presses do, and I think that’s a valuable role that Clark is right to call attention to and rely on in his explanation of the decision. I imagine that Clark’s assurances about the review process the manuscript underwent will be doubted by OUP’s critics. Such doubt will be encouraged, I suspect, by Clark’s use of “balanced” to describe the desired judgments of the reviewers. Why not “sound” judgments or “informed” judgments or “reasonable” judgments? “Balanced” evokes worries that bothsidesism or other political considerations played too prominent a role in the decision. Or perhaps this was just an infelicitous word choice by Clark. One might have a better sense of what to think about that, and about the critics’ doubts, once the book is published.