With Winter Break coming, professors, you have some time—maybe a month or so—to kick back and just relax. And let’s not forget those three months during summer when you don’t have to work. And don’t you get a fall break and a spring break, too? Sweet.

In the time between terms, the likelihood of academics having a conversation with a family member or acquaintance that includes something like the foregoing goes up. And so, too, may the usefulness of the following graphic, created by Susan Wardell, a lecturer in social anthropology at the University of Otago: 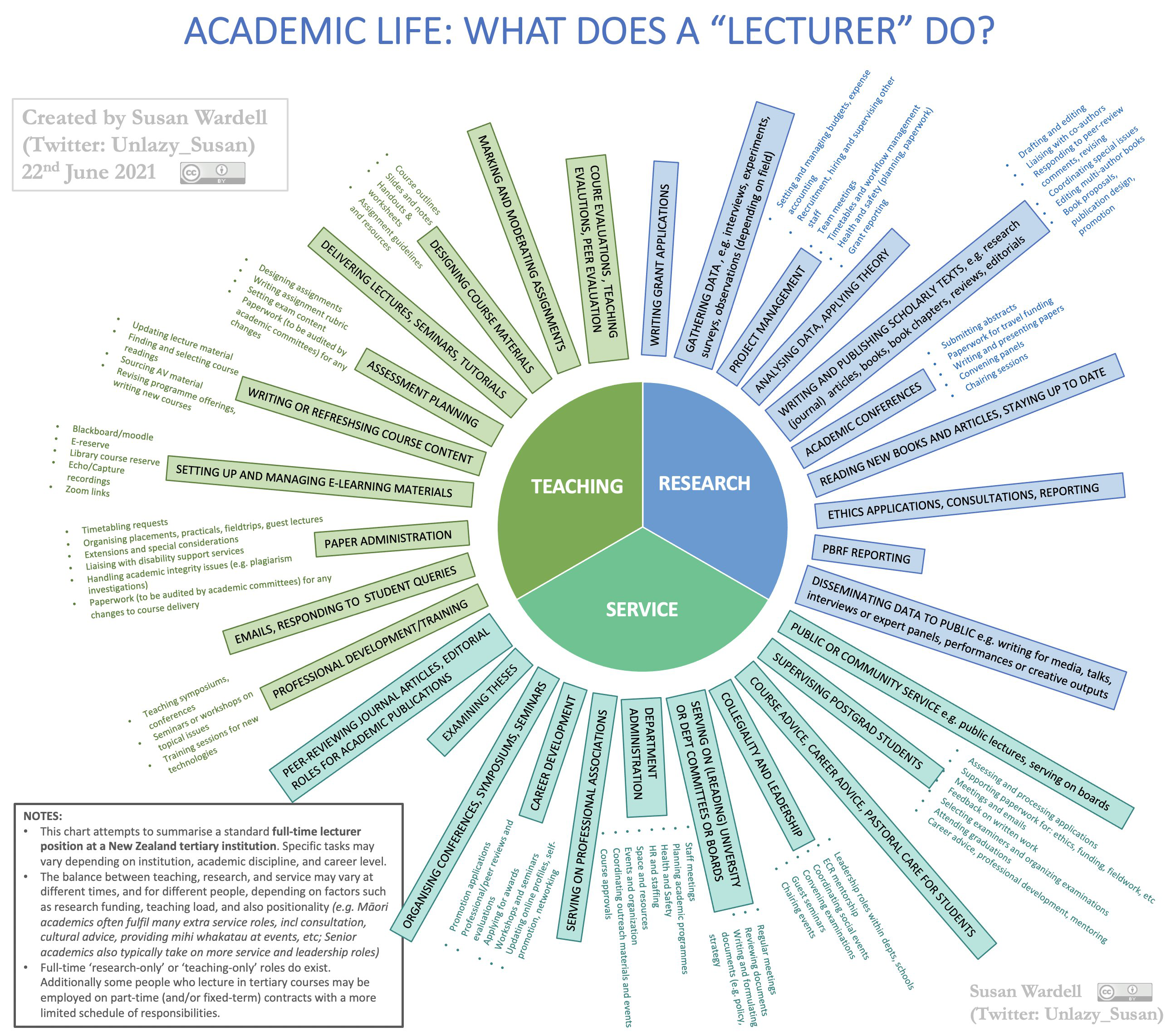 Dr. Wardell publicly shared this on Twitter earlier in the year, noting, “my undergrads often have no idea about what I do, other than pop up to gives lectures once a week. My postgrads, who want to get into academia, aren’t always well informed about what that means either.”

As she says, the chart aims to summarize the responsibilities of a “standard full-time lecturer position at a New Zealand tertiary institution. Specific tasks may vary depending on institution, academic discipline, and career level.” It’s something that has gone through several iterations (below is the initial white board draft). 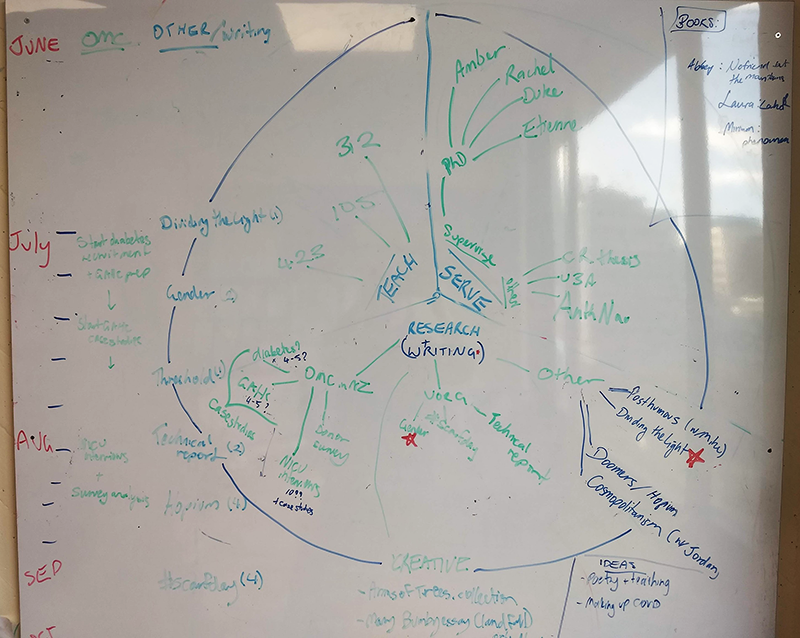 What, if anything, needs to be added to it or altered?

It would need to be totally reworked for contingent faculty, adjuncts, and lecturers here in the US (where the majority of academic work is done by Non-Tenure Track contract workers). No College/Departmental service (though we still do service to the profession and community), substantially larger teaching loads (typically 5/5 or higher if we are full time), and less research, although many of us still do as much research as possible because we are desperately clinging to it as (a) justification for keeping our current employment, and (b) a possible if nearly asymptotic path to a tenure track position.Report

Also don’t forget to add in the incredible amount of work you do applying for jobs in these positions. My experience was that that took up as much time as my research and service combined.Report

I spend my breaks communing with Charles and David Koch about how best to destroy democracy and cause climate change.Report

It’s good to have achievable goals.Report

I believe this falls under “public or community service” and “disseminating data to public” in the original chart (and, tangentially, “writing grant applications,” as I imagine the communing leads to them handing you large sacks of money later on).Report

True…most students don’t know what profs do. Aside from that the article is self serving pablum & BS.Being an academic in a PhD granting university is possibly the worlds cushiest job with virtually no accountability. It’s a rare case when tenure & promotion is denied . Sabbaticals & almost complete control of one’s time outside of teaching one or two classes a week. Office hours are a joke. Often 3 hours a week for students.Here in my neck of the woods salaries of assoc profs are ~ 150,000 wIth a very healthy pension. Checkout the dross & & pap on vitae’s & you will find very few publications, even fewer of these that are cited much , few grants & few grad students being carried.
Put a regular academic in a elementary / high school setting most would not last a month.Report

Wow – now that does sound cushy, but not remotely like the jobs of most philosophy academics I know. I don’t know what country and institution-type your ‘neck of the woods’ is (it must be in the US from the sounds of it?), but it might be a very specific one. Many assistant professor or equivalent-level academics I know in the US and UK (at PhD-granting institutions) make the same amount of money as people make for entry-level post-undergrad jobs in other fields, are overworked, unthanked, are controlled by mountainous administrations that seem to understand or care little about what they need in order to teach or research (e.g. using the pandemic as an excuse to *permanently* get rid of academics’ offices so that the university can make money from renting out the space instead, cutting their pensions…), teach far far far more than ‘one or two classes a week’, get overloaded with administrative duties, and have their publications counted, ranked and undervalued by an arbitrary administration system put in place to prove their worth, and *by no means* can they take sabbaticals or complete control over their time whenever they like. Sure, a lot of them have control over their scheduling, but within a minimum 6-day work-week that they need to fit everything in. So okay, academia has its perks, but some of the perks you describe are available only to a small fraction of the academic workforce, it seems to me.Report

P.S. And when I say control over their scheduling, I strictly mean control over structuring any time they might have left for research – which, for many of them, is painfully little. Their teaching schedules and commitments are simply handed down from above and are regarded as non-negotiable (commuting or childcare needs etc. not considered).Report

Indeed, I am likely guilty of sampling error not only for systems I am familiar with and especially the full professor types (-I am not in the USA btw) & there are disturbing developments in admin fartcatchers . There should be gulags set out for that crew.And women faculty get shafted regularly especially at your level .And I think the social sciences are pretty bad for things I huff & puff about.Report