A researcher specializing in medieval philosophy has plagiarized the writings of a number of scholars in several of her published works, according to an editorial in Vivarium, an academic journal of medieval and early-modern philosophy. 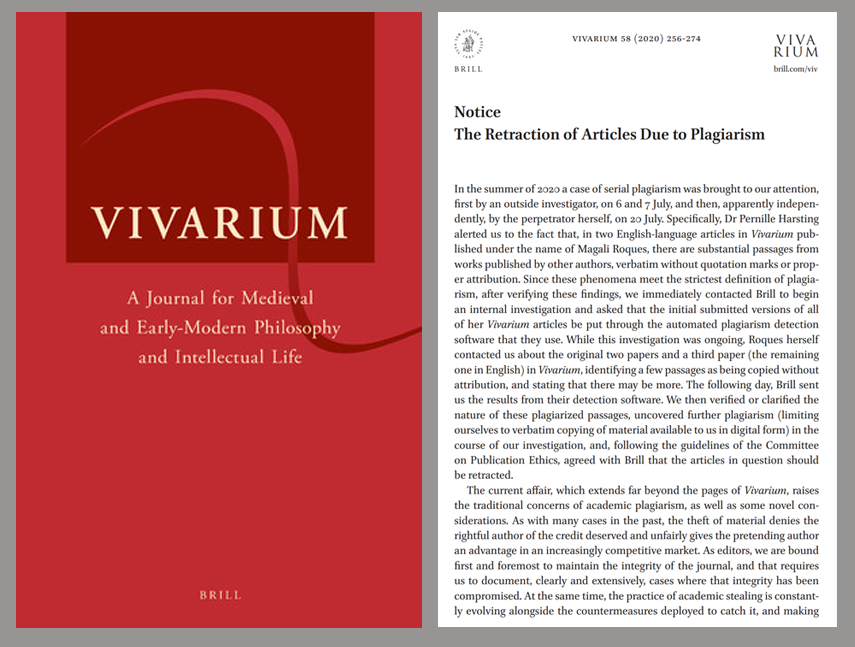 The philosopher, Magali Roques, currently holds the position of “chargée de recherches” (research fellow) at Le Centre National de la Recherche Scientifique (CNRS), which, according to a source, is “the highest and most demanded position you can get as a junior academic in France.”* She previously held fellowships at the University of Hamburg and the University of Helsinki. She earned her Ph.D. from the University of Tours.

Vivarium has retracted three of her articles:

(The last of these was co-authored; the journal explicitly notes that the contribution of the co-author has not been called into question.)

The instances of plagiarism were first brought to the attention of the journal this past summer by Pernille Harsting, who previously played a role in uncovering the massive plagiarism of Martin W.F. Stone (who also worked in medieval philosophy) over a decade ago. During the journal’s investigation, Roques came forward and admitted to plagiarizing.

In their article about the retractions, the editors, Christopher Schabel (Cyprus) and William Duba (Fribourg), write about the negative effects of plagiarism and the reasons for publicizing it:

We do not enjoy performing our duty. For marginal fields such as those served by Vivarium, we have seen from experience that the damage wreaked by plagiarism extends to institutions, bringing vulnerable positions, departments, and institutes to the attention of administrators eager to let the rationale of collective punishment direct the evisceration of budgets in Social Sciences and the Humanities. Our colleagues in adjacent fields will seize upon public cases of misconduct as an opportunity to reallocate scarce resources in their favor, thereby ensuring that those who previously lost out to plagiarists in competition for fellowships and positions lose out once again. Yet we believe that it would be worse for the field were we to ignore the accusations, cast doubt on the charges, and claim that the damage done were minimal…

[T]he practice of academic stealing is constantly evolving alongside the countermeasures deployed to catch it, and making public the methods and techniques used in contemporary cases of unattributed copying should help future editors and scholars identify the cases that we collectively missed.

They then proceed to provide detailed evidence of the plagiarism, providing side-by-side comparisons to Roques’ articles with the works from which she stole material. Here are two of the several examples they provide: 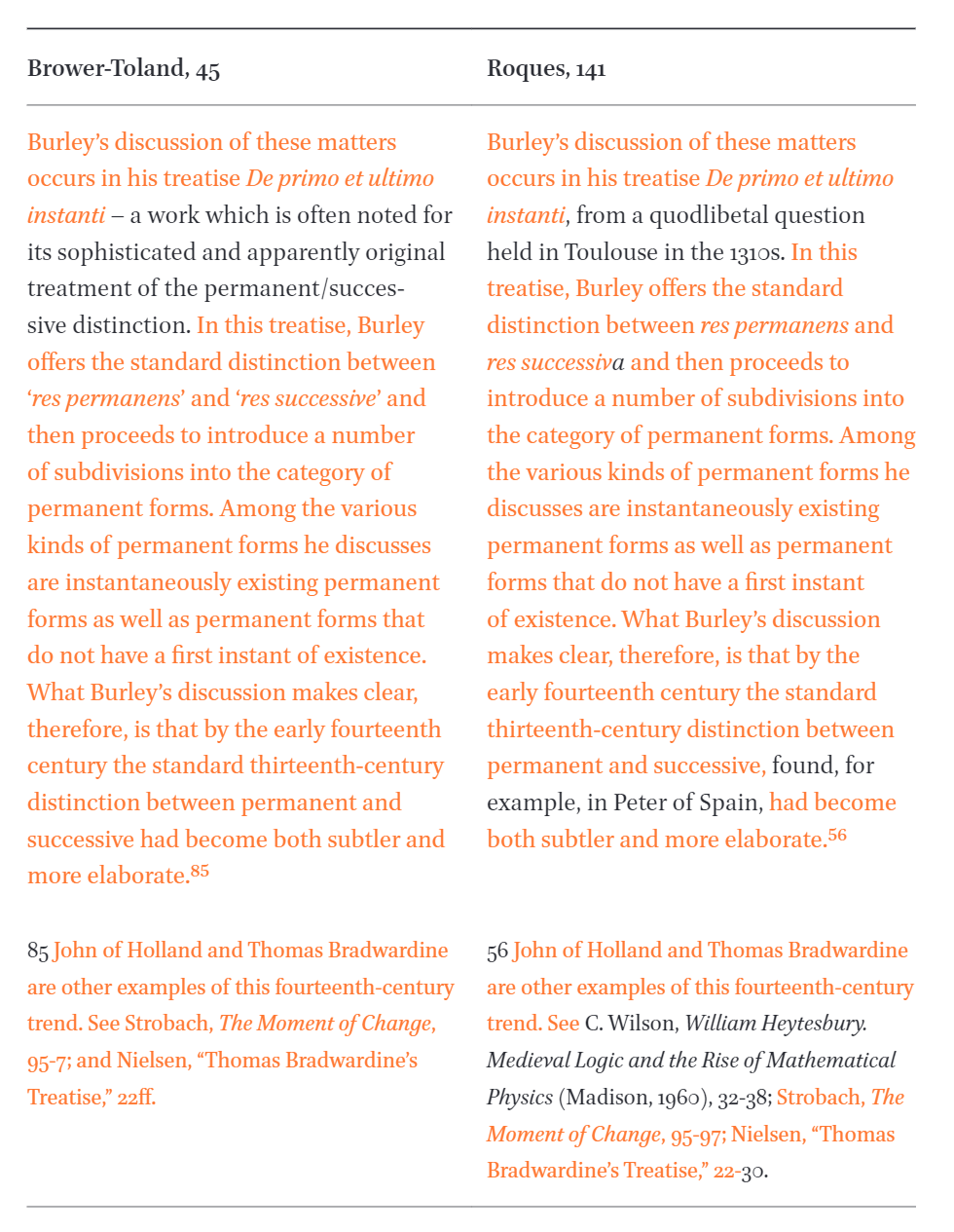 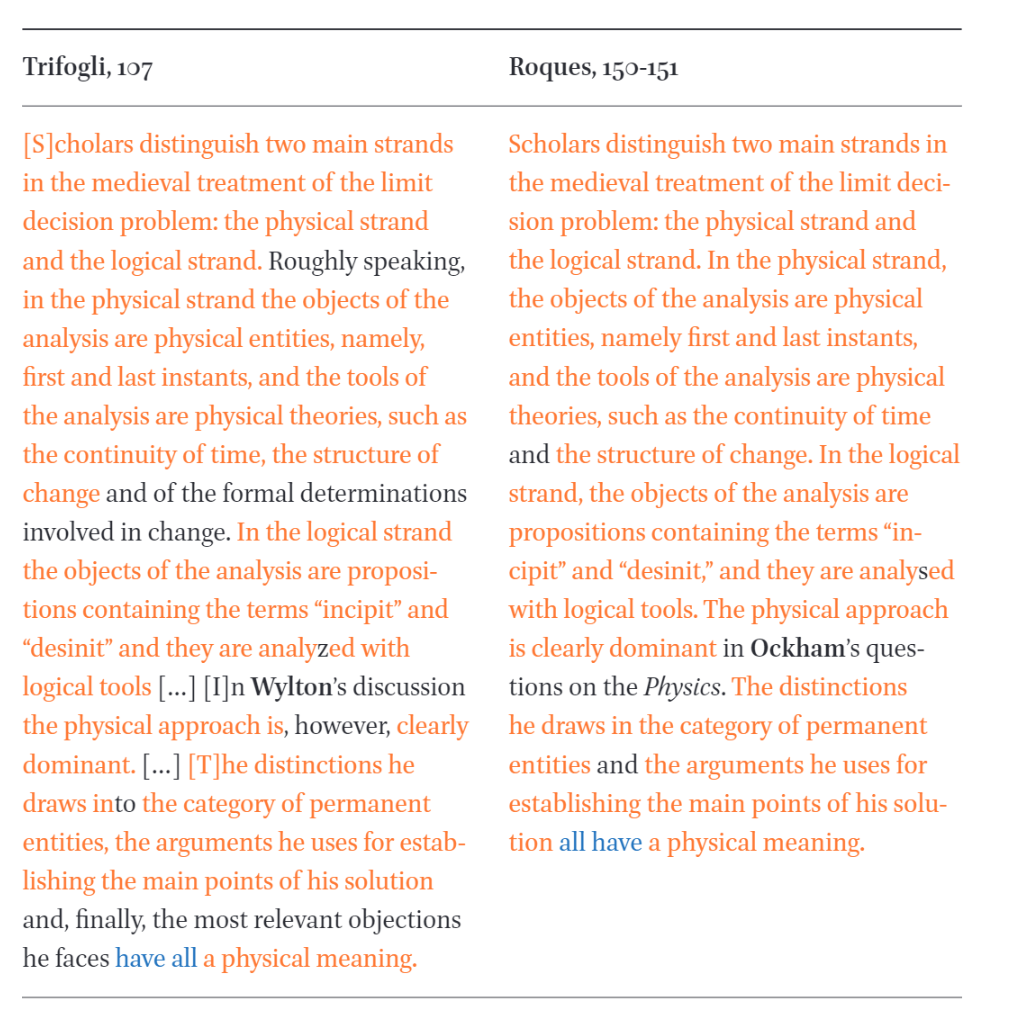 The editors write that Roques’ plagiarism “extends far beyond the pages of Vivarium.”

In light of this investigation, other writings by Roques have been called into question. One work elsewhere, “Ockham on the Parts of the Continuum,” originally accepted for publication in Volume 5 of Oxford Studies in Medieval Philosophy, has been withdrawn, and sources say that other retractions will be announced soon.

* Update 1: the original version of this post mistakenly identified Roques as a post-doc at CNRS; she instead holds a permanent research position, and this has been corrected in the body of this post. (This is struck through because it was contradicted by a commenter.)

**Update 2: This list originally included not just the author of a chapter from which Roques plagiarized but also the the three editors of the volume in which the chapter appeared; that was a mistake and those editors have now been removed from the list.

Update 3 (11/13/20): I added another screenshot of the plagiarism detailed by the editors of Vivarium.

Update 4 (11/13/20): Another article by Roques has been retracted: “The Identity Conditions of Matter According to William of Ockham,” which was published in Volume 6, Issue 2 of Epekeina in 2015. A brief retraction notice is here. The retraction notice includes neither the name of the author nor the reason for the retraction, but I have received a report from a reliable source that includes an annotated version of the article detailing multiple instances of plagiarism. Authors plagiarized by Roques in this article include: Marilyn McCord Adams, Richard Cross, Mauro Dorato and Matteo Morganti, Steven French, Peter King, David P. Lang, Cynthia MacDonald, Armand Maurer, L. Nathan Oaklander, Claude Panaccio, and Robert Pasnau.

Update 5 (11/15/20): An article by Roques published in the journal Archives d’histoire doctrinale et litteraire du Moyen Age in 2018, “Must the Relation of Substantial Composition Be a Mode? William of Ockham’s Answers,” has been retracted. There is no explanation provided for the retraction, but it is listed as such on the issue’s table of contents.

Update 6 (1/9/21): Roques’ “Contingency and Causal Determinism from Scotus to Buridan,” a chapter in the edited collection Contingency and Natural Order in Early Modern Science (Springer), has been retracted. One of the co-editors of the volume, Rodolfo Garau (Herzog August Bibliothek) writes, ” the volume was blind-refereed by two external reviewers; Roques’ article was read, and commented upon, by me and the other editor. We were all in good faith in considering it as an original piece.”

Update 7 (1/18/21): An annotated version of Roques’ “Contingency and Causal Determinism from Scotus to Buridan,” mentioned in the previous update, which details the plagiarism in it, is here (and the bibliography of plagiarized sources is here). Here’s a sample of four consecutive pages from it: