“Why Science Needs Philosophy,” a multi-authored opinion piece published last year in the Proceedings of the National Academy of Sciences (PNAS), got a boost last Friday when rapper MC Hammer shared it with his 3.2 million followers on Twitter.

Philosophers responded by retweeting Hammer’s tweet and following him on the site, and Hammer often returned the favor. For example: 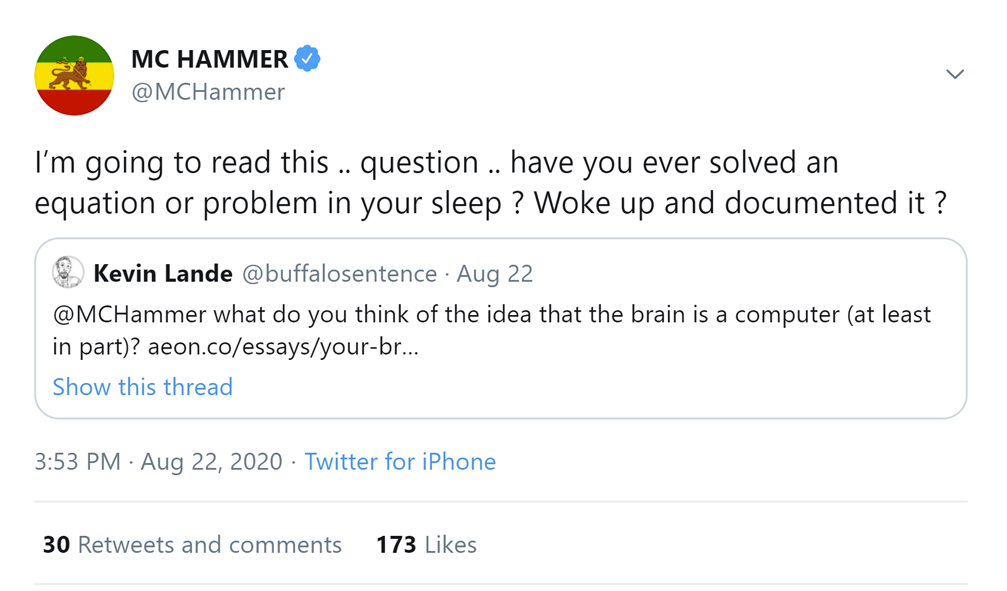 MC Hammer, known for hits such as “U Can’t Touch This” and “2 Legit 2 Quit” in the early 1990s, has had an extensive music career, and has been a actor, producer, preacher, web mogul, and promoter of mixed martial arts, among other things.

His recent activities on Twitter show an interest not just in philosophy, but science and engineering as well, and included a weekend shout out to science and philosophy:

Related: Shakira, Philosophy, and the Power of Celebrity

On a somewhat depressing day (first grey British day after Greek sunshine…) this made me smile.

Unless there is some way to overcome international transaction fees, the amount received by overseas reviewers will be near nonexistent.

Some prominent studies, cited in books such as Dan Ariely's Predictably Irrational and Michael Sandel's What Money Can't Buy, suggest that small payments may be […]

The honorarium is around U$40. I didn't know it was subsidised by publication fees when I reviewed for them (I probably would have done so

This is great. The sooner philosophers commit to open access as the standard and refuse to referee for journals where publishers profit from their gratis

From Rate My Professors, not a student evaluation. Combined Derek Jarman's Blue and Satantango into one film. But I felt it really captured the […]

I'm not sure whether 2 or 3 is better, although Prof. Kornblith's points here resonate with me. Not many will be able or willing to […]

Grant Tavinor on What Video Games to Play in a Philosophy Classroom? (guest post)

I suggest you try playing on the DayZ official servers to get a sense of "the life of a man, solitary, poor, nasty, brutish, and

I suppose that it may make things worse. There are two scenerios: (1) reviewers are paid symbolically which changes nothing exept increasing costs, (2) reviewers […]

Especially interesting, I think, is this: "We will also pay an honorarium to all reviewers." We might finally get to see if cash will: 1) make it […]

Steve Hernandez on What Video Games to Play in a Philosophy Classroom? (guest post)

This is great! As I was reading the heading of each section I found myself thinking of the exact games you wound up using in […]

As Jamie and Brian point out, there are some fiscal realities here about which it is important to be mindful. It is not possible […]