“I’m trying to create, in my own little word, a network of virtual colloquia and workshops for people stuck at home.” 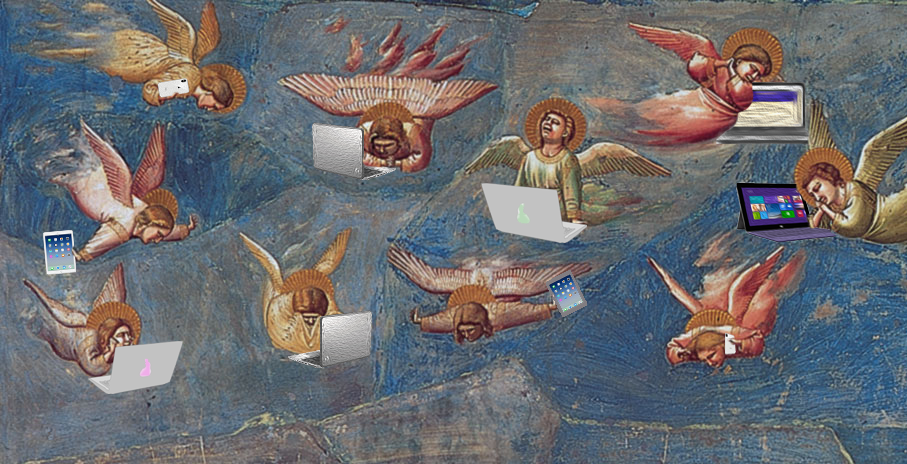 [with apologies to Giotto]

That’s Robert Pasnau, professor of philosophy at the University of Colorado, whose “own little world” is the world of medieval philosophy. He wrote in to share the news that he is now putting on a series of virtual colloquia in medieval philosophy. The first “Virtual Medieval Colloquium”, which took place last Thursday, featured Eleonore Stump (St. Louis University). The next one is this Thursday and will feature Peter Adamson (LMU Munich).

The colloquia take place over the videoconferencing platform Zoom, and are recorded. They’re hosted by the Institut d’Etudes Avancées de Paris.

It’s a great idea. If you’re aware of other similar initiatives, please let us know in the comments.

Professor Pasnau is also putting together a network of students who are writing PhD dissertations in medieval philosophy so they can set up virtual dissertation workshops. For more details, see his blog, In medias PHIL.

The Australasian Experimental Philosophy Group is starting up a virtual discussion group for recent work in xphi, starting on Friday with “Proper Names, Rigidity, and Empirical Studies on Judgements of Identity Across Transformations” by Dranseika, Dagys, and Berniūnas’s, (https://link.springer.com/article/10.1007/s11245-017-9528-y).

This is open to anybody who is interested and we’ll break the meeting into multiple “rooms” if needed due to large turnout. If interested please flick me an email ([email protected])Report

I would be happy to organize this for metaethics – anyone who might be interested, shoot me an e-mail at pjwerner1 at gmail.com

I’m not on Facebook now, but if anyone could share this to the Bored, Certified Ethics group, that would be wonderful!Report

This isn’t the same thing, but we posted on Board Certified Epistemologists and Bored, Certified Ethicists asking people to make recordings of new research so that we can continue to learn about new work while social distancing measures are in effect. I added a handful of newish things to the video spreadsheet that was linked in the other post, but I just want to say again that a lot of us are out here and would love to know what you’re working on. If you have the time and energy to create new content, please do. Look for the tab ‘Research talks’ and add the information to the sheet:

In the meantime, I can say that I’ve really enjoyed some new material by Richard Pettigrew, Branden Fitelson, and Roger Clarke. You can find links to their work on the sheet listed above.

Also, if you join the Social Epistemology group on Facebook, they’ve been running a feed of short talks.Report

We should be thinking, arguing, and discussing (availing ourselves of the virtuous forms of rhetoric) what might be the most effective means by which we […]

*whoops! I think that should be "validity" rather than "external validity" (Either way the example from Jefferson's work describes the idea)

Many (maybe most or all? I'm not sure, but at least many) states also have state laws that _at least_ make sex discrimination in […]

Regarding the first few comments, there doesn’t seem to me much that is puzzling about “Johnson’s” views. If Johnson is indeed way off with their […]

You said 98% is in a situation that they can go vegan. That's a complete nonsense. You should try to get somewhat acquainted with the […]

How might one distinguish between "eposodic" memory and operant or classical conditioning using non human subjects.

No doubt these academic indigenous scholars have comparatively easy access (and sufficient income) to shop at grocery stores (or farmers' markets, what have you). As

There is more relevant literature in this compilation: https://www.academia.edu/4843868/North_American_Indians_History_Culture_Politics_and_Law_A_Bibliography