The following is a guest post by Anna Ichino, a postdoctoral research fellow at the University of Milan. A version of it first appeared at the blog, Imperfect Cognitions. 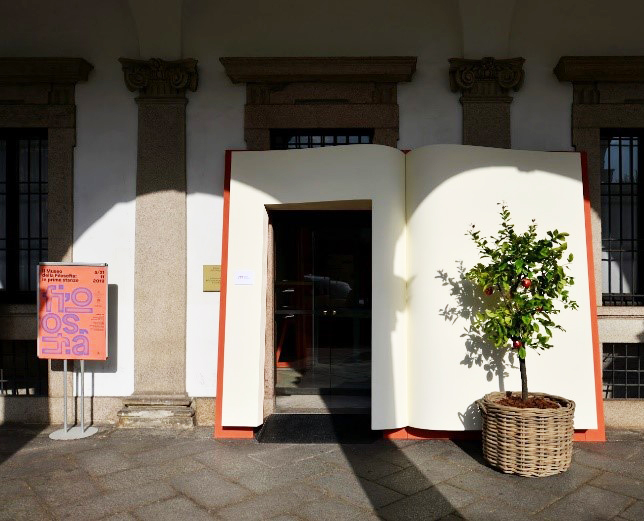 The Philosophy Museum
by Anna Ichino

Have you ever visited a Philosophy Museum? I bet not. Apparently, though there have been some philosophy-related museum exhibits and temporary installations, there aren’t any permanent philosophy museums in the world. So my colleagues and I in the Philosophy Department of the University of Milan have decided that it is time to build the first one. In this post, I’ll tell you about this exciting project.

What we had in mind was not an historically-minded museum collecting relics about the lives and works of important philosophers, but something more dynamic and interactive—built on the model of the best science museums—where philosophical problems and theories become intuitively accessible through a variety of games, activities, experiments, aesthetic experiences, and other such things.

Easier to say than to do, no doubt. It’s an ambitious project, and to put it into action we had to proceed gradually. We started with a temporary exhibition, which took place in our University from November 5th to 21st. There, we created the first two actual halls of what we hope will soon become a permanent museum, together with a third ‘programmatic’ hall where we presented the plan for what still needs to be done. 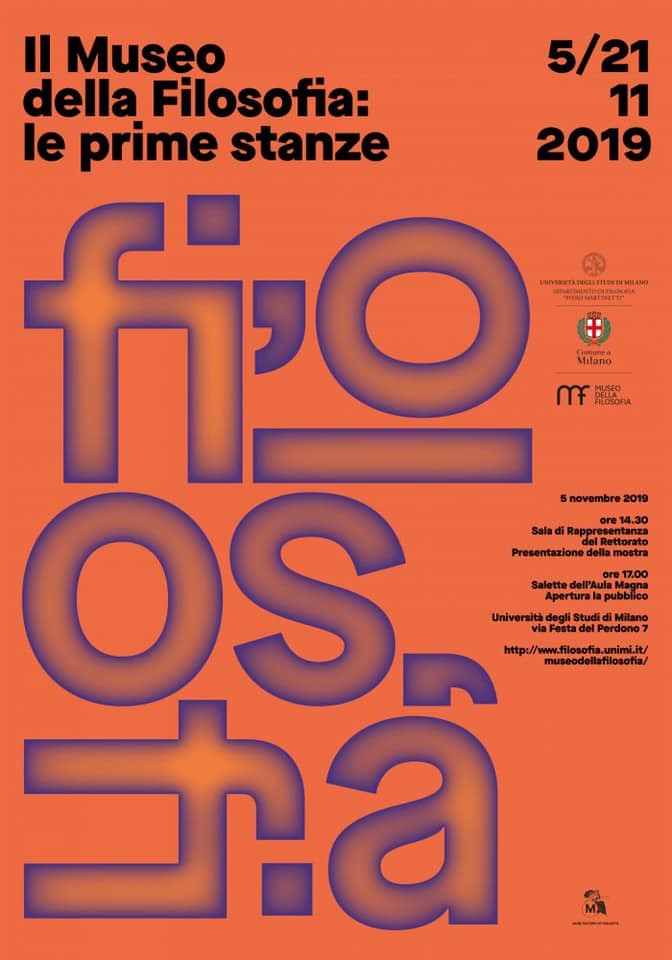 Thanks to a generous funding awarded to our Department as a part of a MIUR Excellence Scheme, we could rely on professional help from museum experts, graphic designers, and multimedia studios, in order to build an aesthetically appealing environment where complex ideas were communicated in fun and engaging ways.

The first hall was quite introductory—devoted to the nature of philosophical problems and methodologies. 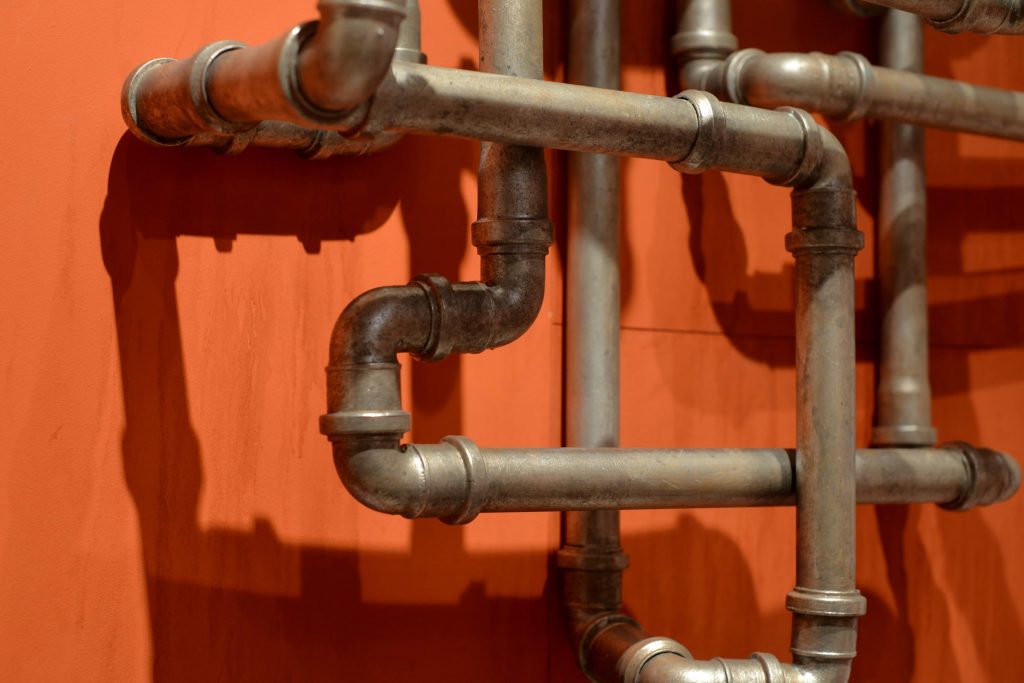 We used images like Mary Midgely’s ‘conceptual plumbing’ or Wittgenstein’s ‘fly bottle’ to convey the idea according to which philosophical problems are in important respects conceptual problems, which amount to analysing concepts that we commonly use in unreflective ways. Visitors were led to realise the difficulties that arise as soon as we try define common concepts like ‘self’, ‘freedom’, ‘time’, ‘moral responsibility’, etc… We then introduced two important tools that philosophers use to analyse such concepts: the construction of thought experiments, on the one hand, and the formulation of paradoxes, on the other. 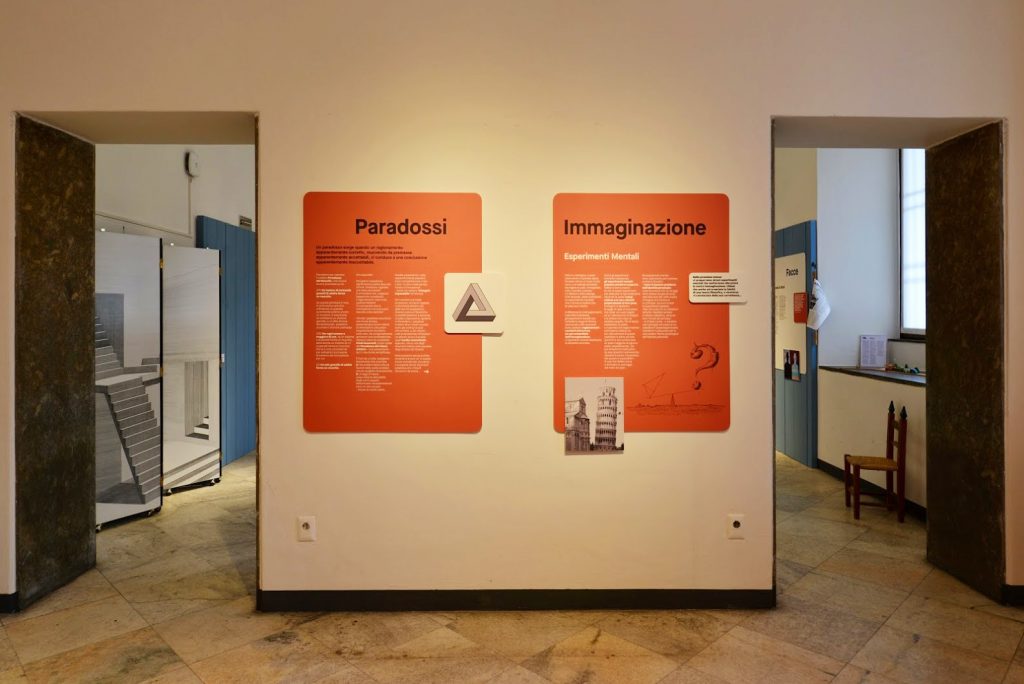 On this basis, visitors were ready to move to the second hall, where they could literally play with paradoxes and thought experiments in order to appreciate their heuristic role in philosophical inquiry. 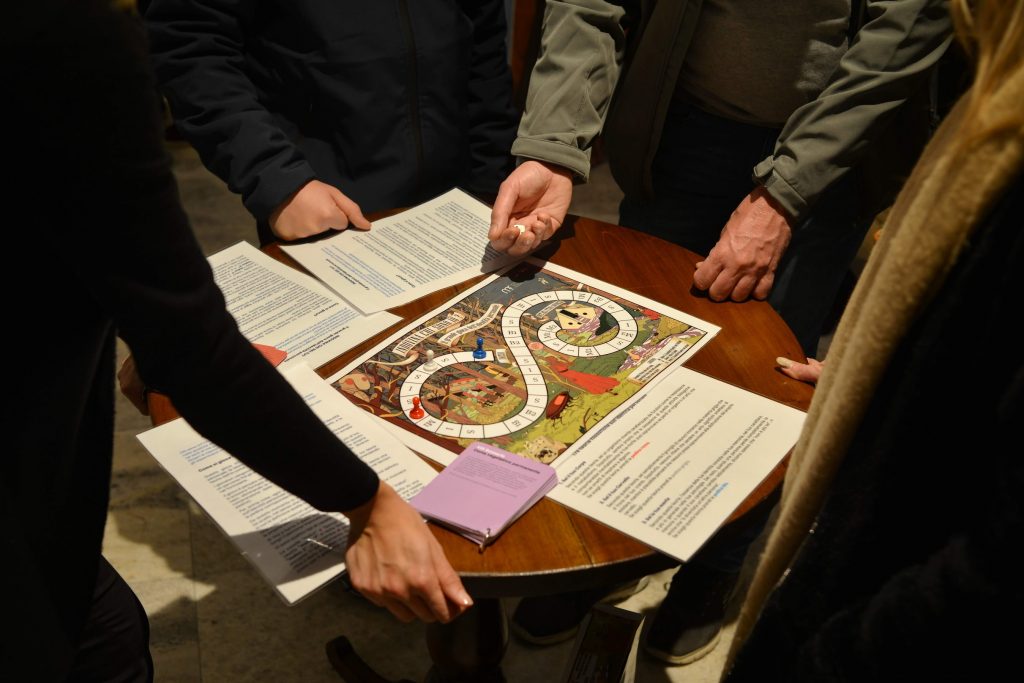 In the ‘Personal Identity Goose Game’, for instance, different theories of personal identity were illustrated through a journey into the relevant thought experiments. To begin, every player had to ‘adopt’ one theory—choosing between the psychological theory, the bodily theory, or the brain theory. Every square on the track corresponded to the scenario of a different thought experiment (scenarios like teletransportation, brain transplant, fission, metamorphoses, etc…); and when one landed on each of them, she had to guess whether or not, according to the theory she adopted, that was a scenario in which she’d have survived. If she guessed correctly, she could roll the die once again. She could also try to ‘kill’ her opponents (i.e. to make them miss a turn) by moving their pawns into squares-scenarios where, according to ‘their’ theories of personal identity, they wouldn’t have survived. 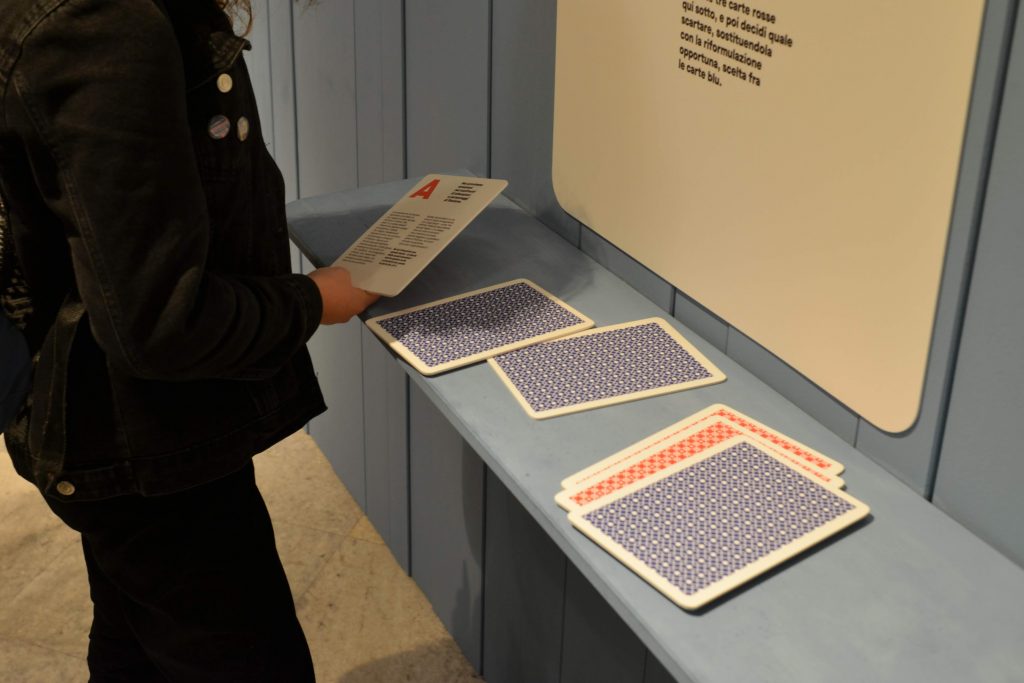 In the ‘paradox of fiction game’, the three mutually inconsistent propositions that give rise to the paradox corresponded to three different cards: players were asked to solve the paradox by discarding one of the three and finding a suitable alternative from a deck of cards describing different philosophical theories. So, for instance, one who ‘discarded’ the proposition according to which we can feel genuine pity for Harry Potter could pick the card describing Walton’s ‘quasi-emotions’ theory. 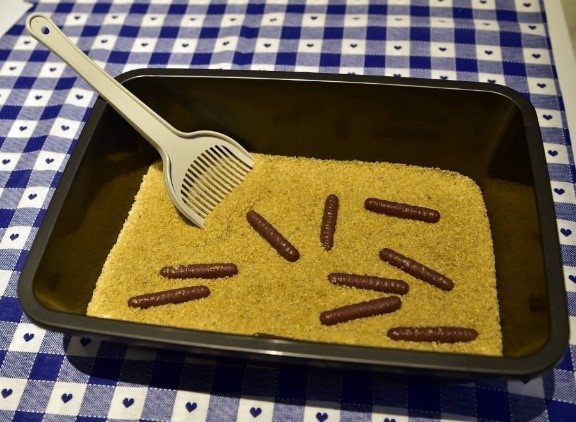 To further illustrate the complex relations between imagination, belief, and emotions, we also replicated a series of famous experiments in which participants were asked to do such things as eat chocolates shaped as cat excrement, sign a pact where they gave their soul away to the Devil, or wear the (perfectly sterilized) pullover that (so they were told) previously belonged to a serial-killer. 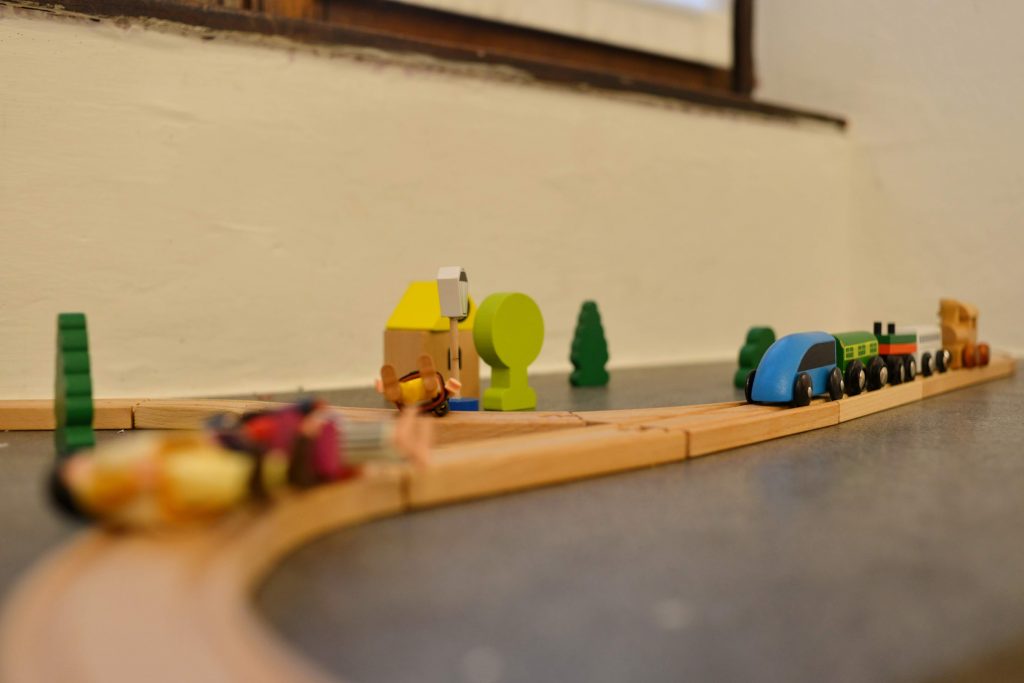 The second hall also included a ‘paradoxes of perception game’, a ‘trolley-problem game’, and several animation-videos devoted to other intriguing paradoxes and thought experiments.

To conclude the visit, there was the  ‘School of Athens’ game’—in which visitors had to decide whether to back Plato or Aristotle; then they could also take a souvenir picture portraying themselves in the shoes (and face!) of one or the other. 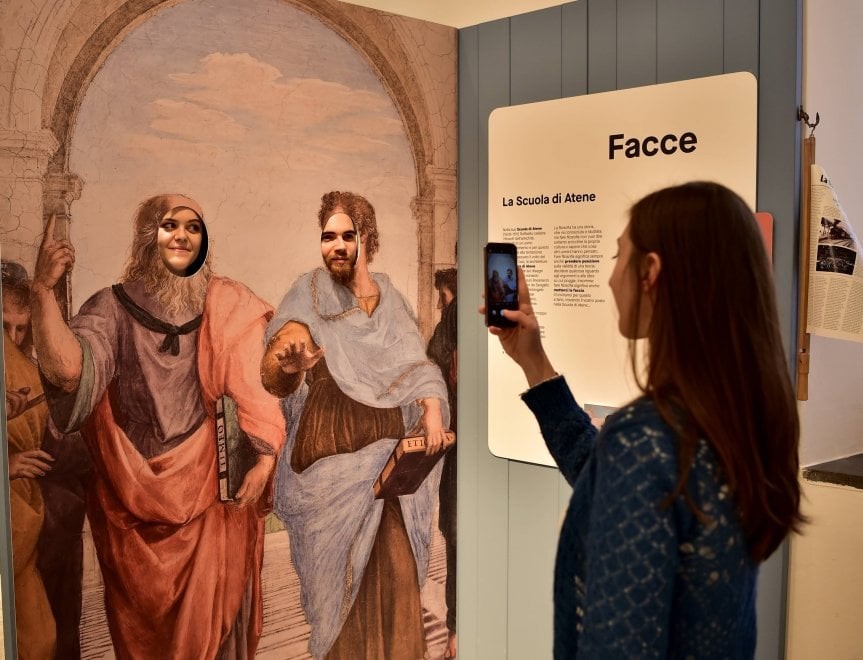 Whilst building all this was a really hard work, it was definitely compensated by the enthusiastic response of the public. We had more than three thousand visitors in less than three weeks (including thirty-four high-school classes), who gave us very positive and stimulating feedback. 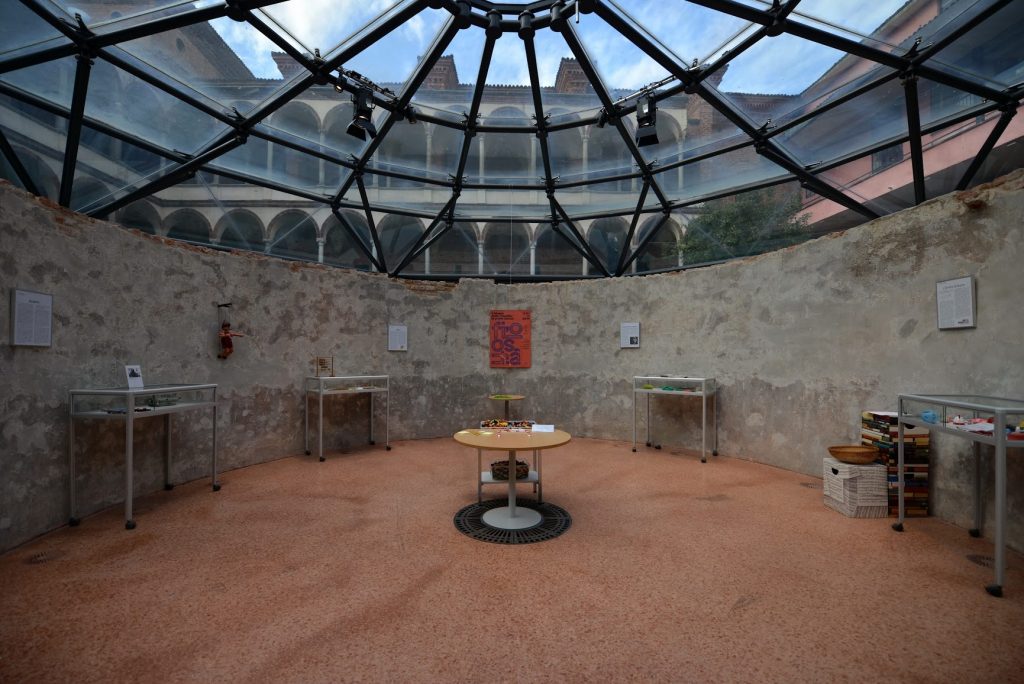 We now hope to find soon a permanent home for our Philosophy Museum.

(Unfortunately, all this material is currently in Italian only; but English translations are on their way!)

Some further images are here.

Related: “Coming in 2020: Gallery of Art and Philosophy“, “What Would Be in a Philosophy Museum?“, “The Art of Philosophy”

Great work, very creative, and from the pictures, it truly does look engaging. Love the chocolate cat litter “balls”! It is encouraging that the public response was as strong as it was. I hope it can be expanded and that other people try something similar. It’s a distinct approach to public philosophy.Report

Tank you, Cynthia! The chocolate-cat game was among the most popular, indeed! Overall, visitors turned out to be quite willing to eat poop:) While they were generally more reluctant to sign the pact with the Devil, and even more to wear the sterilized pullover of a serial-killer. And if they enjoyed these activities, we did also enjoy observing their reactions: lots of interesting anecdotal evidence to think about…
We now very much hope that the project will continue and expand, and indeed – as you say – that other philosophers/institutions will try similar things. When we started, we weren’t at all sure that the idea could have worked out nicely, but if there is one thing we’re now confident about, is the fact that it does – and it’s definitely worth the effort!Report

I really enjoyed reading about this! The choice to model it after science museums seems like a good one.Report

This is wonderful. Philosophy needs to be more accessible to the public and the exhibits and interactive elements make this an excellent start. Thinking outside the box, great!!Report