In 1901, Mind published a parody issue. Edited by “a troglodyte, with the cooperation of THE ABSOLUTE”, it features, among other things, articles by philosophers well-known for their appearances in latter day pun-fests, such as “I. Cant” and “F.H. Badly.”

It’s a surprisingly large volume. Check out the table of contents: 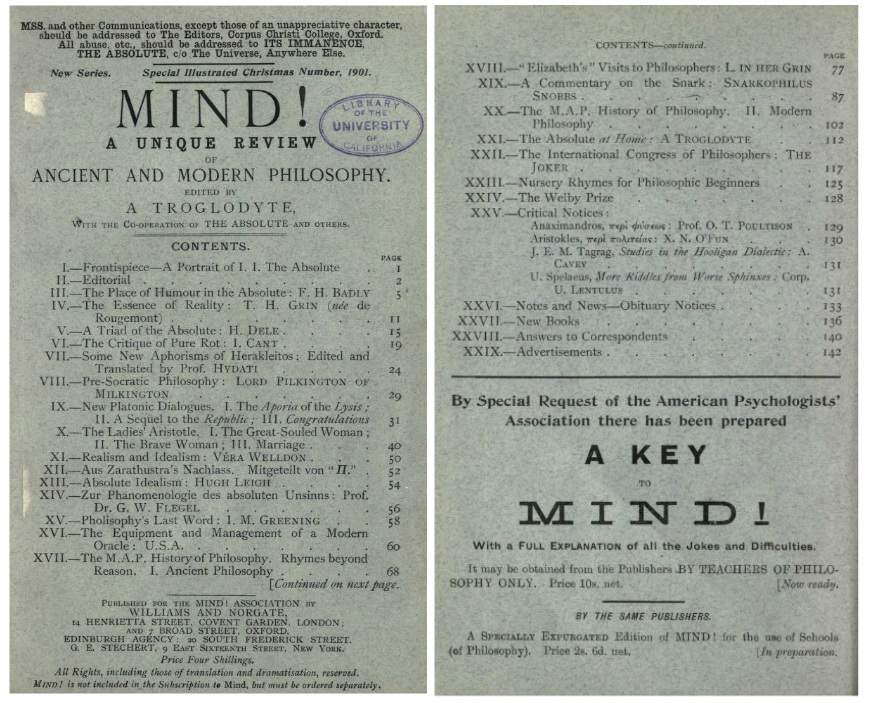 There’s a lot in there: humorous essays, visual gags (a portrait of “the absolute”), poetry, fill-in-the-blank limericks, dialogue, aphorisms—here’s a new one from Heraclitus: “None can pass the same examination twice, and many not even once”—and even nursery rhymes “for philosophic beginners”:

I haven’t read through most of it, so I can’t say how a lot of the humor holds up. (Not sure what “The Ladies’ Aristotle” has in store for us, for example). But let’s keep in mind that it was written over a century ago and that, as the editors note in the introductory editorial, “whatever the character of our ridicule, ridicule does not kill”—unless it’s really good.

Officially titled Mind! A Unique Review of Ancient and Modern Philosophy, it was written by F.C.S. Schiller. You can thumb through a virtual version of the issue here.

Thanks to Paul Franco (Washington) for sharing this on Twitter. He came across it reading an essay by Stephen Toulmin in The Legacy of Logical Positivism (edited by Peter Achinstein and Stephen Barker).

UPDATE: Mind! 2000, mentioned by Renee in the comments, is available here.

Related: A Collection of Philosophy Humor

Wasn’t there a second one of these published some time in the 90s? I seem to recall that Peter van Inwagen was involved.Report

PhilMath on New Publishing Arrangements for "Thought: A Journal of Philosophy"

Just when you thought the PDC can't get worse ... (compare this to the recent Philosophy of Physics journal which just seems the right way