Last week, I reported on the proposal of the administration of the University of Tulsa (TU) to reorganize the school, reorient it towards vocational training, and eliminate departments and majors in philosophy and other disciplines. It turns out that the making of this disaster was itself pretty disastrous.

Writing in City Journal, long time TU philosophy professor Jacob Howland explains some of the factors that led up to the reorganization, and also lays bare the ways in which Provost Janet Levit manipulated the process of developing the proposal:

After Levit became provost in May 2018, she established the Provost’s Program Review Committee (PPRC), “tasked with reviewing all academic programs and evaluating each one across a number of dimensions, including their contribution to the university’s core mission, their trajectory, their outcomes and their financial sustainability.” Faculty were repeatedly assured that this process would be transparent, inclusive, and data-driven.

In fact, it was none of these things. One immediate indication of trouble was the composition of the PPRC, which included no one from the humanities or the sciences (other than applied ones).

In most cases, the PPRC was effectively limited to considering financial data.

Some departments and programs submitted comprehensive, internal academic reviews to the committee; others, including English, Philosophy and Religion (my home department), Film Studies, Arts Management, and Language and Literature, were scheduled to complete their reviews more than a month after the PPRC made its secret recommendations to Levit in February 2019.

Worse, the financial data generated by the PPRC—calculations of total cost per credit hour taught—were prejudicially constructed and rife with errors. Instructional costs included the full compensation of endowed chairs, though these are not part of the university’s operating expenses. Courses taught in Honors and other non-major programs were not included in the calculations. Departments were charged for faculty holding courtesy appointments.

Receiving pushback at a faculty meeting, Levit insisted that, while she had not seen the PPRC data, it was accurate to “within 2 percent–3 percent.” (The PPRC ultimately admitted that it had overstated instructional costs for my department by 40 percent.) Levit concluded the meeting with an ominous pronouncement: if faculty could “suspend disbelief,” and if we supported what the administration was doing, there would be a place for us at TU. But would there be a place for the liberal arts?  [emphasis added]

The communities of teaching, learning, and creative expression that TU has fostered and nurtured for the past 30 years are being destroyed by individuals with little understanding or appreciation of their value.

(TU’s board of trustees is composed of business executives and lawyers, none of whom has a higher-education background.)

This is combined with what Professor Howland sees as problem of increasing superficiality in higher education, in which a foolish enthusiasm among the trustees and administration for the school’s athletics (“TU had for years been running a structural deficit of about $16 million. Athletics accounted for most of the total loss”) and a shallow emphasis on appearances and feelings (he notes that the central question of current TU President Gerard Clancy’s strategic plan was “How do we want TU students to feel?”) takes priority over knowledge and learning.

Even if one disagrees with Professor Howland’s disdain for efforts to ensure that universities are “inclusive, safe, and diverse,” one could still object to the TU administration using the language of such concerns as cover while they plotted to eviscerate the core of the school.

You can read the whole of Professor Howland’s essay here.

UPDATE (4/22/19): University of Tulsa undergraduate Adam Dees spoke at a protest event regarding the proposed changes, with a focus on the university’s philosophy offerings. You can read his prepared remarks here. 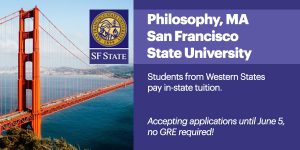