“Who gets to teach at good philosophy departments in the UK?” That’s the question taken up in the following guest post* by Philip Schönegger, a graduate student in the St. Andrews and Stirling Graduate Programme in Philosophy who is working in ethics and experimental philosophy. 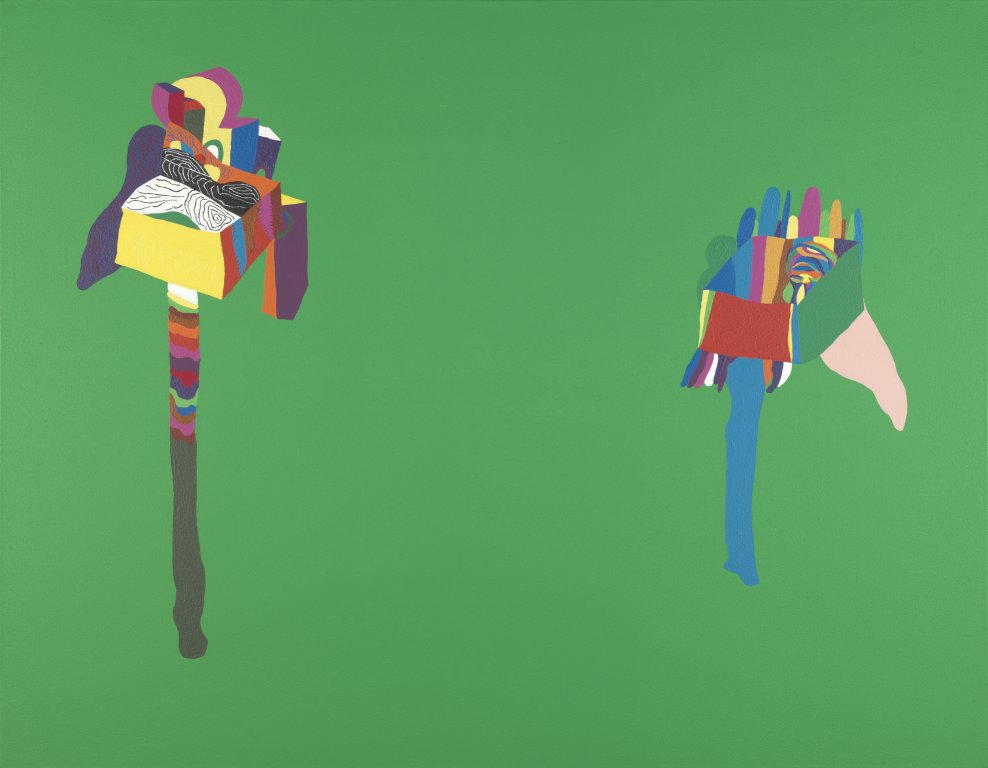 For data collection, I went to the departmental websites of all PG ranked universities in the UK and analysed the faculty profiles on three points: (i) Where have they studied for their Ph.D.? (ii) Where did they land their first job? (iii) Where are they currently working?

(iii) Per definition, all individuals are employed at a PG top-15 university.

(ii) Based on the departmental or personal (hyperlinked) website, first employment was recorded. No differentiation between fellowships, postdoctoral employment, or professorships was made.

(i) Similarly, origin of (first) Ph.D. was recorded.

If any of (i)-(iii) were insufficiently documented, the data point was not recorded. In other words, if it was unclear where a person received their Ph.D. from or where they had their first job, no data about this entry was gathered. In total, 425 full entries of faculty at PG top-15 departments were analysed. 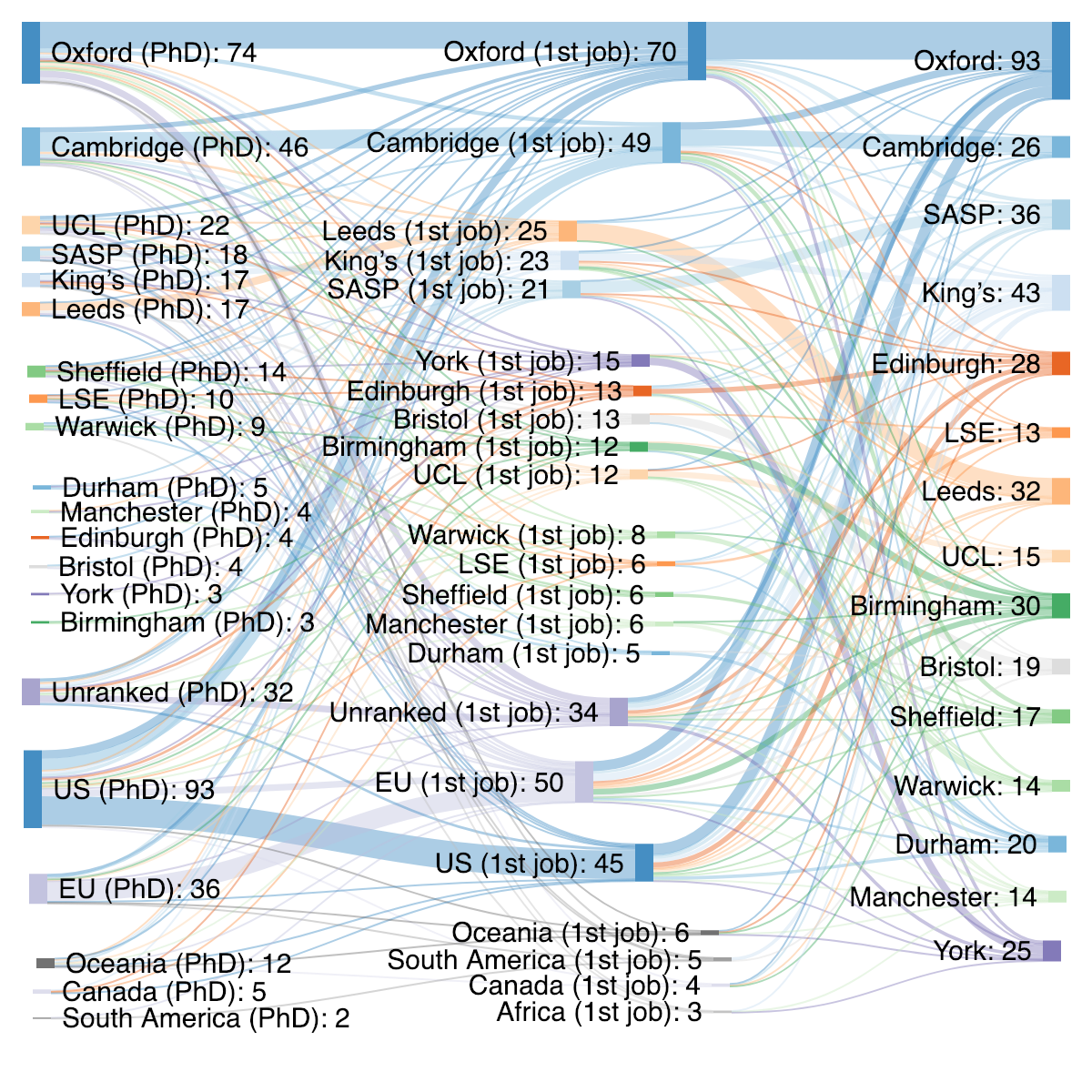 148 of the 425 faculty positions at PG ranked departments have received their Ph.D. outside the UK (34%), with the US and the EU supplying the vast majority of those.

Oxford secures placements at ranked schools far and above any other school. Over 17% (74) of faculty have received their doctoral degree from Oxford. About half of graduates also got their first job at Oxford (with a further half of them staying for following jobs or continuing their first employment).

Cambridge graduates secured a total of 46 jobs (10% of all hires), outpacing all other ranked schools except Oxford. Similar to Oxford, a large number of those who get their first job at Cambridge stay.

University College London (UCL), St Andrews / Stirling Joint Programme (SASP), King’s College London, and the University of Leeds are all relevantly similarly successful in placing graduates in PG ranked departments (between 22 and 17). SASP, akin to Oxford and Cambridge, shows a strong relationship between first job at SASP and current employment there. Leeds surpasses all three in keeping the majority of their faculty who were employed for their first job in the department. Together, they account for 17% of all hires.

Trailing the third group, but still relevantly successful in placing graduates are the universities of Sheffield, Warwick, and the London School of Economics (between 14 and 9), together totalling 7% of hires at ranked departments.

Last are the universities of Durham, Manchester, Edinburgh, Bristol, York, and Birmingham who place significantly less graduates at PG ranked departments (between 5 and 3), i.e. just over 5%.

Moreover, only 7% of all faculty positions at PG ranked departments are filled by graduates of the entirety of UK unranked programmes.

Collapsing together these 5 groups, the following picture emerges in which the first three groups are mostly hiring amongst themselves or the non-UK applicant pool. Similarly, the lowest group also hire strongly from their own ranks (and the non-UK applicants). 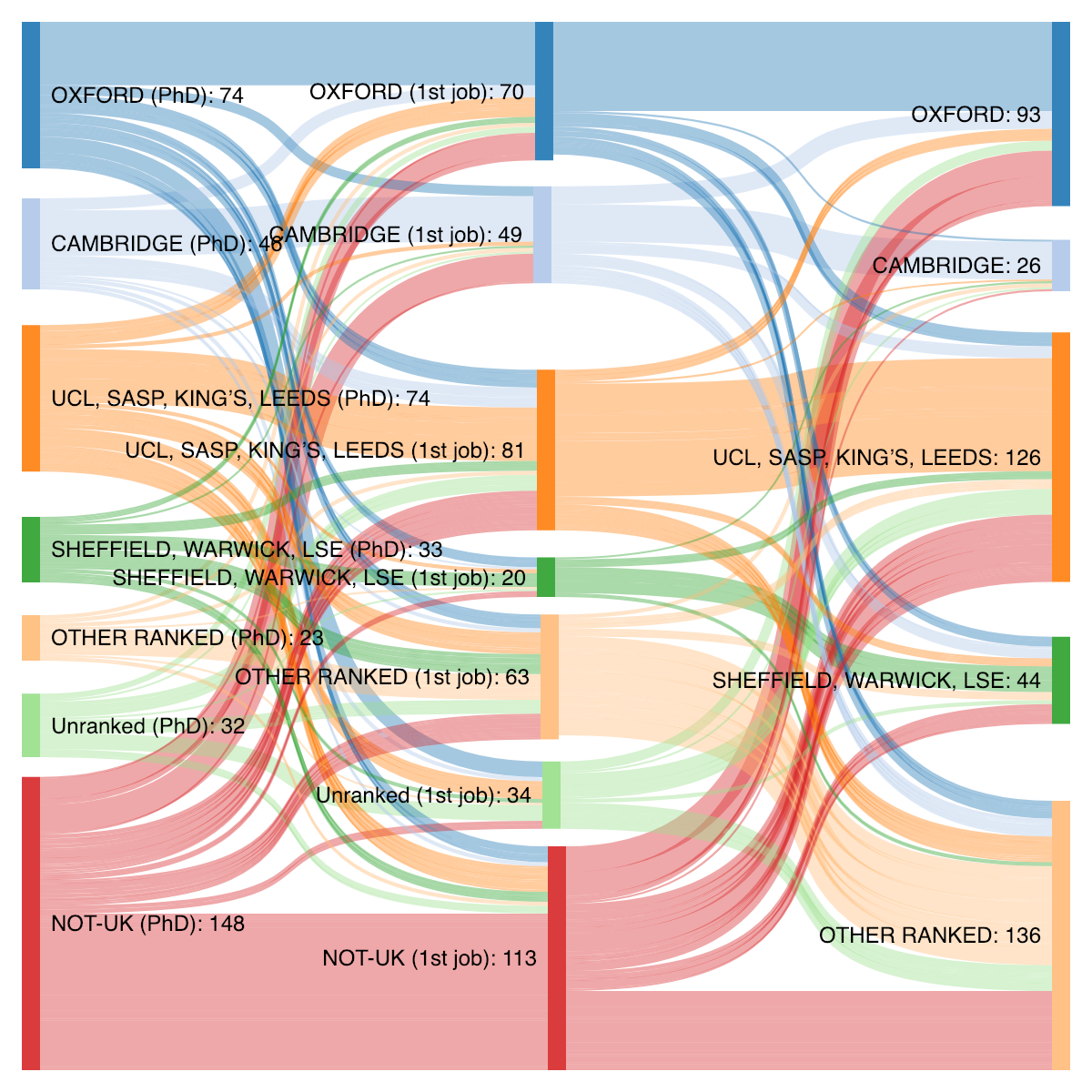 Moreover, diagram 2 shows the strong relationship between first and current job. While this might be due to the fact that some people’s first job is their current one, the data show relatively clearly that if one’s first job is within one group, one’s current job is also very likely going to be in that group.

There are a few (potential) problems for the analysis reported here. First, the data presented are subject to a potentially significant time lag. This means that some of the data might go back relatively far, making the results insufficiently responsive to short-term changes in departmental restructurings like hirings. I believe this aspect to be relatively insignificant but due to the data collected I cannot present an analysis to defend this claim (though I might return to this issue with a more detailed data set in the future).

Second, not all departmental websites were equally detailed. Some specified (i)-(ii) for all faculty members, while others did only do so sporadically. For example, the websites for Bristol, Warwick, LSE, and Manchester were generally less specific as to the origin of Ph.D. and the specifics of the first job. However, given that the analysis presented does not specifically differentiate between the PG ranked departments (but rather treats them as aggregates), this limitation might not sufficiently skew the results. As such, not too much weight should be put on the right end of the diagram as this limitation impacts the numbers per department disproportionately. However, given that most Ph.D. graduates do not end up at the same university they received their Ph.D. from, this distorting effect should not be very strong.

I take this analysis to be of supplementary importance when deciding between departments. Given the relative lack of placement data in the UK, these results should be used in addition to other established rankings or primary considerations like departmental fit and supervisor availability.

Five groupings of universities emerge. Oxford and Cambridge, though distinctly different in placement rate (and departmental size) place first and second respectively. A third group of considerably successful departments is comprised of UCL, SASP, King’s, and Leeds. Still relevantly able to place some graduates are departments from the universities of Sheffield, Warwick, and LSE. Trailing all other ranked programmes are the universities of Durham, Manchester, Edinburgh, Bristol, York, and Birmingham.

These results differ in two relevant ways from the PG ranking. On the PG report, Edinburgh is ranked above UCL, though the placement data presented here show that UCL is exceedingly more successful in placing graduates at ranked programmes (22 vs. 4 placements). Second, Sheffield outperforms its rather low PG ranking in these data as well. This suggests that, in general, the data fit with established rankings, except in some cases.

Given the limitations outlined above, the results ought to be taken with a grain of salt. However, as placement data are rare, I understand this analysis to be a valuable addition to one’s decision process nonetheless.