Last week, the Ministry of Education in Saudi Arabia announced that it is adding a philosophy course to its secondary school curriculum. Prior to this, philosophy had been wholly absent from education at all levels in Saudi Arabia.

The course is called “Critical Thinking and Philosophy” and will be part of the nationwide high school curriculum, which is mandated by the Saudi Ministry of Education. The government has contracted with DialogueWorks, a British educational consultancy focused on philosophy, to train teachers for the course.

I asked one person familiar with this development why the teaching of philosophy hadn’t been allowed before in Saudi Arabia. He said, “There is no official statement of the reason, but there used to be a stigma around philosophy in Saudi Arabia. Some religious people think it is in conflict with Islamic traditions, so it must not be taught. They are the same people who were against women’s driving. Now, the government is ‘socially’ more open-minded, so they allowed women to drive for the first time last year, and this year allowed teaching philosophy.” 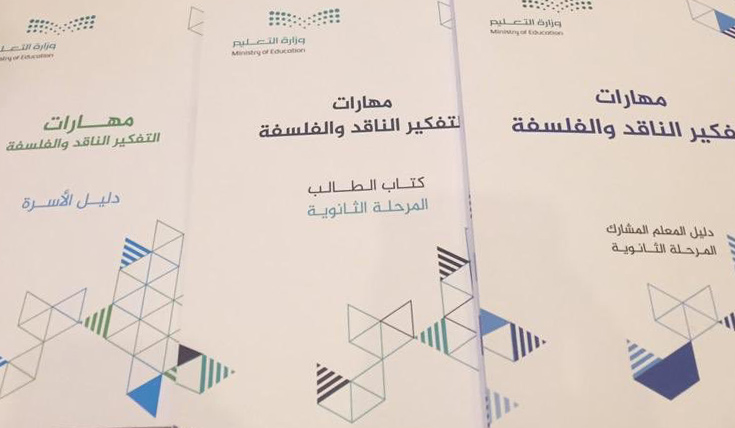 Hassan Alsharif, a graduate student in philosophy at the University of Kansas (who appears to be the first person ever from Saudi Arabia to have pursued a PhD in philosophy*), is interviewed about the introduction of philosophy into the Saudi Arabian high school curriculum here (in Arabic). In an email, he says, “I’m so happy that my country is getting more open-minded to other intellectual works, especially philosophy.”

It’s a sad thing to see that philosophy is thought to be in stride with Islamic teachings, when in the Middle Ages there have been numerous incredible Islamic philosophers; the same thing we see of course with the opposition of science and religion nowadays. It seems as if religious people feel threatened by knowledge and critical thinking, when I really think it can only strengthen the position.Report

It can hardly strengthen all religious positions. If Islam is true, other religions are not.Report

There’s a long tradition in Islam of some philosophers voicing concerns about the dangers of certain traditions within philosophy. In some cases the term “philosopher” only gets applied derisively to the ones that are said to be bad. One of the great Islamic philosophers, Al Ghazali, has much of this sort of discussion:

(And of course, you get this outside the Islamic tradition as well, from Wittgenstein and others.)Report

Saudi Ministry of Education reportedly open to suggestions: “The minister also called for suggestions, initiatives, ideas and projects that may create more opportunities to students and voiced the ministry’s willingness to listen to them.”
From: http://saudigazette.com.sa/article/549759/SAUDI-ARABIA/School-curricula-to-include-philosophy-critical-thinking

I await The Onion’s news brief, with suggested course titles. . In the meantime, post your course title suggestions here for possible translation into Arabic! (Please include your office address and hours for official acknowledgment.)Report

As far as I know, I am the one who (in 2006) coined the term “applied ontology”. I use it as a heading in a review 2015 (visit my home page – http://www.ingvarjohansson.se – and click Ontology, On Relations, and On the Parthood Relation), and I also use it in the entry “Natural science” in Handbook of Mereology (2017). This term of mine cannot possibly be a label for the Saudi course that is to be labelled. My distinction between formal mereology and applied mereology is created in analogy with the distinction between pure mathematics and applied mathematics.Report

Your put your finger here on the point. As stated in your prescient review, “Applied Mereology”:

“the move from formal to applied mereology is not always unproblematic”

For a lively introduction to critical thinking, sure to appeal to contemporary Saudi youth, I recommend a module based on the anthology, “Philosophy at the Crossroads: Women Drivers, Stop or Go?”

Advanced students and intrepid teachers may survive a tombstone course based on Machiavelli and current events, “Ethics and ‘The Prince'”Report

I wonder if this means that religious critique will eventually be permitted in Saudi Arabia? Teaching critical thinking seems at odds with legally enshrined and violently enforced religious dogma.

It is a very good news. .Report

I read this with keen interest given the experiences we’ve had at Gallaudet University with visiting delegations of Saudi religion professors supported by the Department of State. The question that was always asked of our Philosophy and Religion department was how we could reconcile philosophy and religion in the same department — they almost never opened with questions about teaching philosophy in a signed language as other visiting groups did. Now I’m off to email some colleagues and former students in KSA to enquire whether this inclusion of philosophy also includes the high school curriculum for deaf education…Report

Really good news. Now the Saudia Arabia will see the development and vision of new era. Philosophy enhance power of thining. But I have a suggestion that first they should introduce in their syllabus
..basic Philosophy like
What is Philosophy, epistemology metaphysics etc
One more things as Saudia Arabia is economically rich they should provide fellowship for international students in philosophy….so that they will see a reasonable researchReport

It is very good newsReport

Interesting development, coming at a time that philosophers in Nigeria are pushing for the teaching of Moral Character and Creative Thinking in Pre-tertiary Schools in the country. Emphasis, in this sort of curriculum, should center on Inquiry (aiding pupils to dream, imagine, and think freely on any decided issue of existence and inviting comments from learners on what qualifies as admirable moral character at their own level of social relations). When society returns to virtue ethics and critical, creative thinking from impressionable age of learners, humanity will be diverted from the throes of nihilism to the portals of peaceful coexistence. I doff my hat for the Saudis!Report

Its highly appreciable step from Saudi govt.to introduce philosophy and critical thinking even at school level.it will enhance the student to think logically, systematically,rationally.Report