Some professors see their students, at least sometimes, as partners in education, but Matthew Slater, professor of philosophy at Bucknell University, does impressive work to make that partnership a reality.

Professor Slater, along with one of his colleagues in philosophy, Jason Leddington, and Joanna Huxster, who works in environmental studies (now at Eckerd College), created the Production of Public Understanding of Science (PoPUS) Project. The project applies recent work in philosophy of science and social epistemology to current practices in science communication, and conducts empirical work using surveys and interviews. Slater calls it “applied, empirical social epistemology.”

The project has evolved over time, though one constant, Slater says in an email, “has been the involvement in undergraduates at all levels of our research: from brainstorming ideas to helping code and analyze data to working on papers with us.”

The collaboration with undergraduates included the development of a new course taught this current term. Called “Science in the Public Eye,” the course is on the public understanding and trust of science. Slater met with four students over the course of the previous summer to research the subject and plan the course, and it, in turn, will likely provide the seeds for further collaboration with undergraduates. Slater writes, of the students:

In addition to doing over fifty interviews for an ongoing mixed-methods PoPUS study of the public’s conception of scientific consensus, they’ve been working on small group projects on topics related to the public’s relationship to science—coming up with ideas and angles I hadn’t considered, proposing well-motivated research questions and methodologies to answer them (most of them with an empirical component).

Slater co-presented some of the students’ findings at the recent Philosophy of Science Association meeting. He adds:

I can’t wait to see the final presentations this week, especially since I suspect that many of the projects have a strong potential for further development and possibly publication once the class is over in the context of the PoPUS project.

These wouldn’t be the first publications for Slater’s students. As part of the PoPUS project, Slater, his colleagues, and several undergraduates have authored papers that have been published (or are forthcoming) in Erkenntnis, Philosophical Psychology, and Public Understanding of Science, and there are several other papers in the pipeline (you can see a list of them here).

Much of the collaboration was made possible via grants. The initial funding for the PoPUS project came from a large Templeton grant awarded to Stephen Grimm (Fordham) on “Varieties of Understanding” and continued with a grant Slater won from the National Science Foundation to study “What Ought the Public Understand about Science?”

Slater says that part of what motivated the project was concern with real-world problems concerning trust in science (on issues such as global warming) and encourages other philosophers to consider the practical applications of their work:

If your interests and training might be applicable to a pressing problem in the world, think about how you might be able to address it—even if that takes you out of your academic comfort zone. In my case, doing this has both given me a broader perspective on the value of philosophy (and its limits) and opened more fruitful avenues for involving undergraduates in my research than I would have otherwise had. This has involved a lot of trial and error, but I’ve enjoyed it and will probably keep pressing ahead on this subject until we run out of ideas to explore or questions to address (which doesn’t seem overly likely at this point).

You can read more about Professor Slater’s work with undergraduates here. 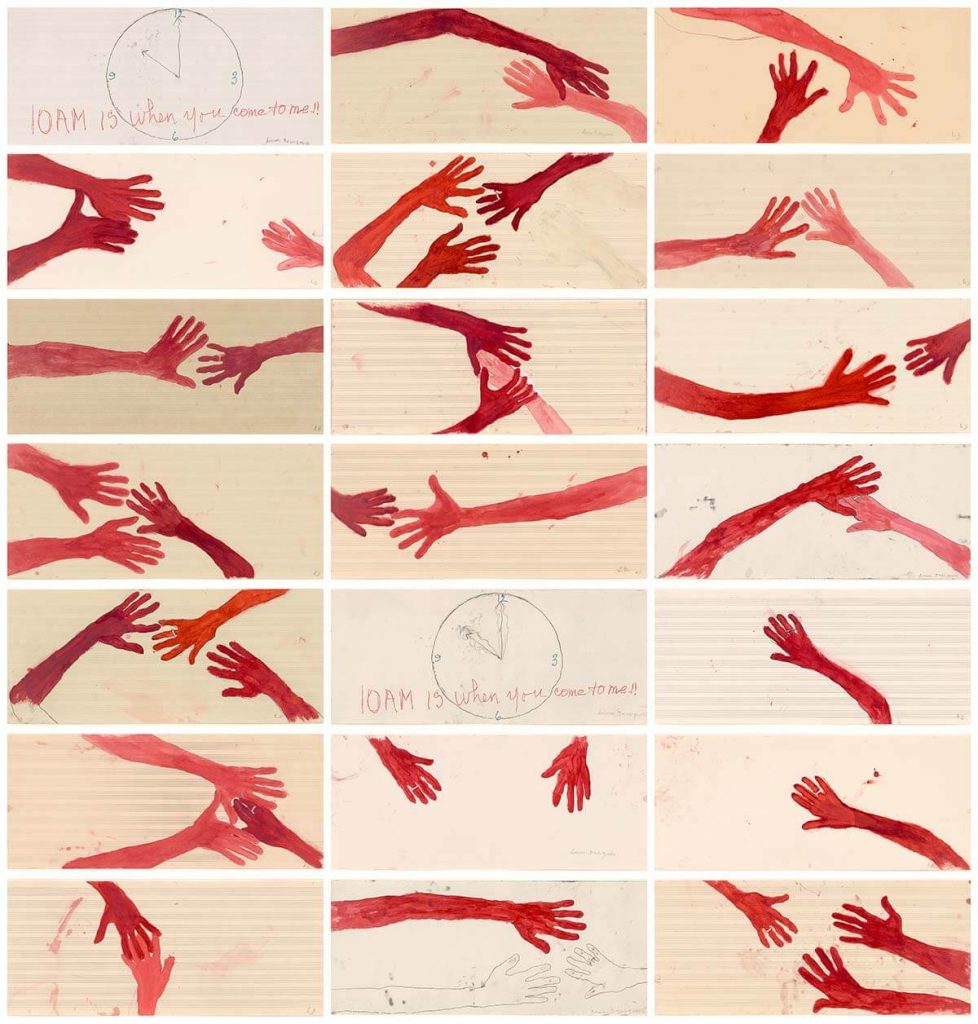 Louise Bourgeois, “10am is when you come to me”