Janet Stemwedel, professor of philosophy at San Jose State University, created a poster for the recent meeting of the Philosophy of Science Association (PSA) laying out reasons philosophers of science might want to use Twitter, along with some basics for getting started.

Most of the reasons and advice generalize to other subfields of philosophy, so I thought it might be useful to share her poster here,(particularly in light of some . 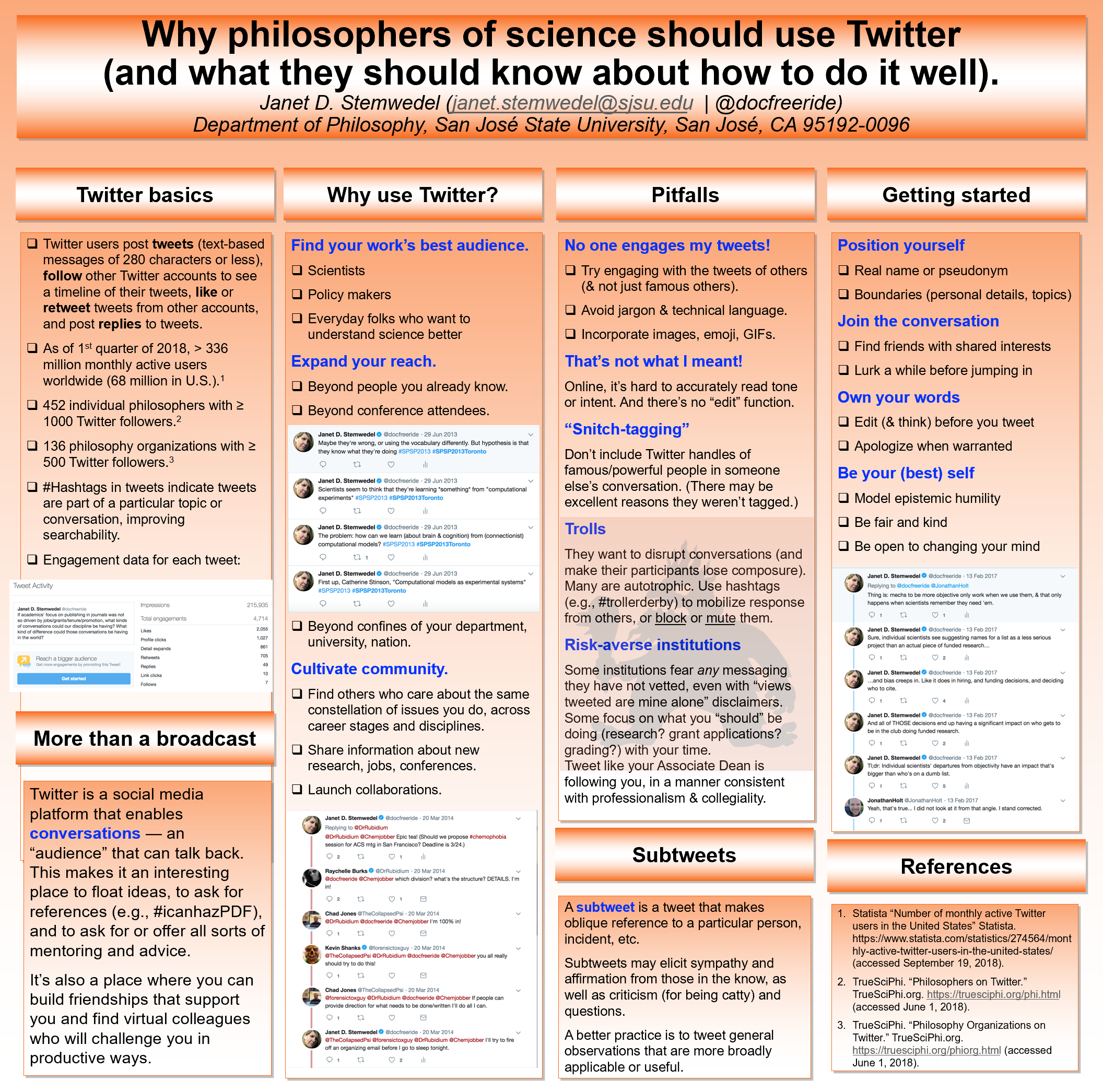 In an email about her presentation, she wrote:

People who chatted with me during the session had a number of questions along the lines of:

The morning after the forum, it feels like I spent a lot of time in these discussions emphasizing that Twitter isn’t magic—unless you’re already a celebrity, it takes time and effort after launching a Twitter account to build your follower count, and to build trust with your followers. It’s not obvious that Twitter is unique among social media platforms in its potential to cultivate productive networks in your discipline (or across disciplines) or to reach broader audiences; it just happens to be the social media platform I’m best at.

But, there are some features of Twitter that add something useful to our toolbox. If you want to get your work (or the ideas that are driving your work) in front of scientists, for example, there are lots of scientists (across geographic regions, disciplines, and career stages) already on Twitter. The two-way nature of communication of Twitter can help you get rapid feedback on arguments or intuitions. If you want to try your hand at explaining why your work matters to a general audience, Twitter can help you connect with general audiences of various sorts. If you want practice expressing your philosophical claims concisely, and in plain language, Twitter’s character limit and the audience of non-experts it affords can do wonders for your communication skills.

Trying other presentation modes that haven’t been as central to our training as philosophers—like conference poster presentations, for example—strikes me as generally beneficial to our communication skills, at least if we’re reflective about our attempts and how they’re received. Tweeting can certainly be part of that, especially for those of us who didn’t grow up on Twitter.

Relatedly, there’s a new feature at TrueSciPhi: a map of the Twitter connections between philosophers and physicists with over 10,000 followers. Click on the image below to be taken to it. TrueSciPhi is on Twitter here. 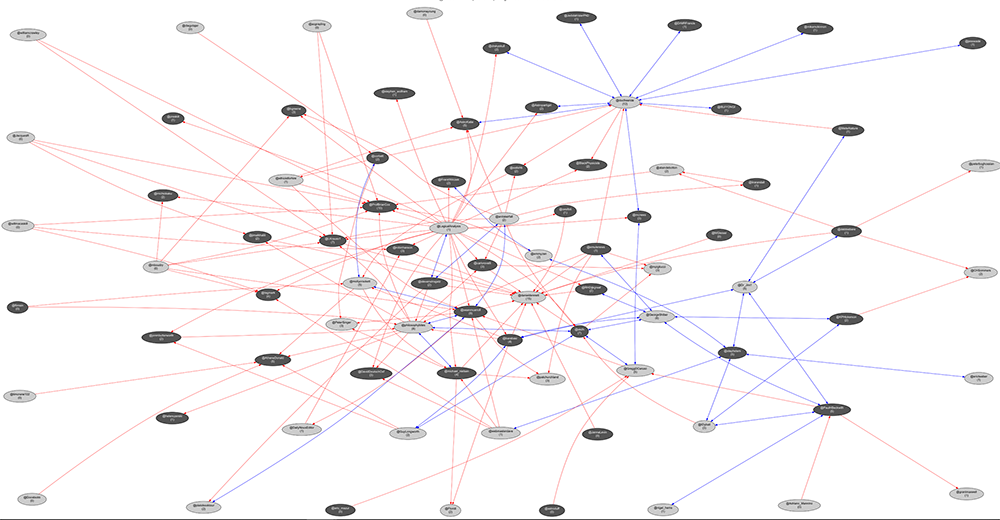 I feel like these pitfalls are radically incomplete and that a proper accounting of the costs/benefits of Twitter doesn’t come out this way. For example, a ginormous pitfall is the opportunity cost of using Twitter, e.g., vis-a-vis actual work, non-virtual relationships, minimizing screen time, getting outside, etc. etc. Another pitfall that isn’t really discussed (aside from trolls) is all the anxiety Twitter can lead to, the ways it becomes all-consuming, and so on. In other words, we could easily agree that she identifies some positives of Twitter, without taking any stance on whether or not it’s the worst thing ever.

Aside from those obvious things, there’s also the virtue-theoretic approach: where do we land with all this “look at me” posturing? It’s even more ironic that, on the thread last week, there was a semi-consensus on not reading the comments, engaging your interlocutors, etc. Which, given the toxicity of the forum, is certainly reasonable advice. But does it not occur to others that any forum for which these are the right answers is irrevocably broken? As philosophers, if we really don’t care what other people have to say or have the time or interest to engage with them, something’s gone seriously wrong.Report

How about encouraging scientists to use mastodon instead of twitter? How about we resist the trend of centralizing the internet into the hands of a few websites, and push for a decentralized internet instead?Report

I don’t see any other philosophy journals on there, and I haven’t run across any philosophers, but Philosophy, Theory, and Practice in Biology is on Mastodon at @[email protected] It’s a pretty nice set-up over there, just sparsely populated.Report

The PSA poster session included a poster that is essentially an advertisement for a billion dollar tech company? I can’t be alone in finding this a little unconventional.Report

Funny, I remember thinking recently that philosophers — and everyone else — would do well to stay off Twitter (and Facebook) altogether.Report

The poster itself however looks like it could have been made in 2006; there’s really not much surprising or new on it, which makes me wonder who the target audience is. Are there really academics out there that need to be told that the ‘audience’ on social media ‘talks back’? More importantly, one would expect that a philosopher would at least mention some of the ethical and epistemological questions that emerge in relation to the current dominance of a particular type of social media in the spread of information. For example, should one attempt to refute obviously false information, or should one rather try to ignore and block people who spread misinformation? How to deal with the fact that current social media are complicit in recent election catastrophes – and the undermining of democratic institutions worldwide? Do academics have a duty to oppose the destructive tendencies of social media? Do they make things worse by participating? These are not just practical or empirical issues, but stuff philosophers should (and do!) engage with on a theoretical level.

Clearly, this advertisement does not do justice to the complexity of the issues we currently face.Report

I’m on Twitter, but I try to avoid generating content myself. Stupid, endless discussions are too easy to get sucked into for relatively little benefit. I wouldn’t personally recommend someone use Twitter (or other social media) unless they are very good at turning it off as soon as they’re annoyed or they need to get work done. If you get sucked into the dopamine hits easily (like I do), just stay off it.Report