An investigation at Baylor University has determined that Trent Dougherty, a philosophy professor there since 2009 who specializes in philosophy of religion, violated the school’s Sexual and Gender-Based Harassment and Interpersonal Violence Policy. Dougherty resigned from the University earlier this week, [added after post was updated:] though according to a philosophy faculty member, “tenured members of the department were prepared to initiate a dismissal hearing against him in the event he did not resign.” 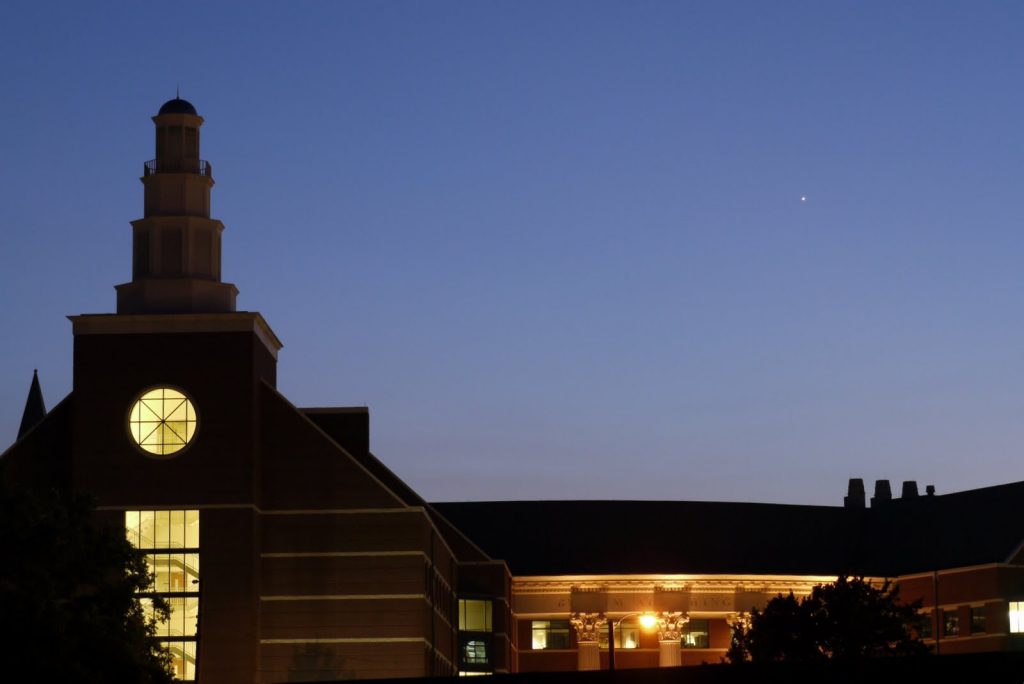 A building on the Baylor campus

At the moment, it is not public knowledge which elements of the Sexual and Gender-Based Harassment and Interpersonal Violence Policy Baylor found Dougherty to have violated. The policy prohibits sexual assault, non-consensual sexual contact, sexual harassment, gender-based harassment, sexual exploitation, intimate partner violence, stalking, and retaliation.

Here is the statement from the Department of Philosophy, in full:

Dr. Trent Dougherty has resigned his position as tenured Associate Professor of Philosophy at Baylor University. Dr. Dougherty was recently the subject of several complaints under Baylor’s Sexual and Gender-Based Harassment and Interpersonal Violence Policy (Title IX). He was found “responsible” on some allegations involving more than one complainant and “not responsible” on others. The investigation revealed additional concerns under other Baylor policies.

The Department of Philosophy expresses its deep appreciation for the courage of the Complainants in coming forward, for their willingness to make their complaints known, and for their patient participation in the process.

The Philosophy Department reaffirms its position that it does not tolerate behavior by members of our community that violate Baylor’s Title IX policy or engage in misconduct that violates other Baylor policies, whether directed toward our current or former students, toward our colleagues, or toward peers at other institutions.

We also take this occasion to reaffirm our dedication to Baylor University’s mission, to integrate “academic excellence and Christian commitment within a caring community.” The Philosophy Department commits itself to careful examination of our community practices and to the correction of any practices that we determine are not in alignment with our mission.

The statement is also posted on the department’s website. 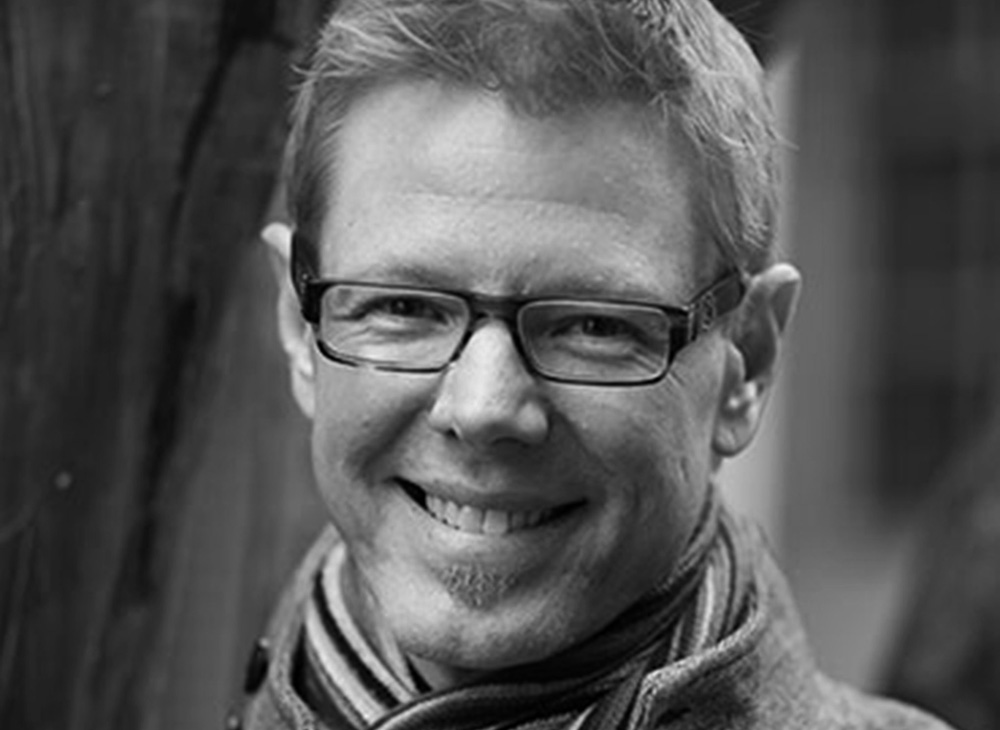 UPDATE 1: Dougherty has written a public Facebook post in which he claims to have received a large financial settlement from Baylor resulting from a lawsuit he filed against the school. He also appears to reveal that at least some of the allegations against him involved sexual harassment, which he says were used as “weapons” against him because of his political views. He also suggests that the settlement is “hush money” paid to him by Baylor because of “their violations of due process, their breaches of confidentiality, and general heavy-handedness.” 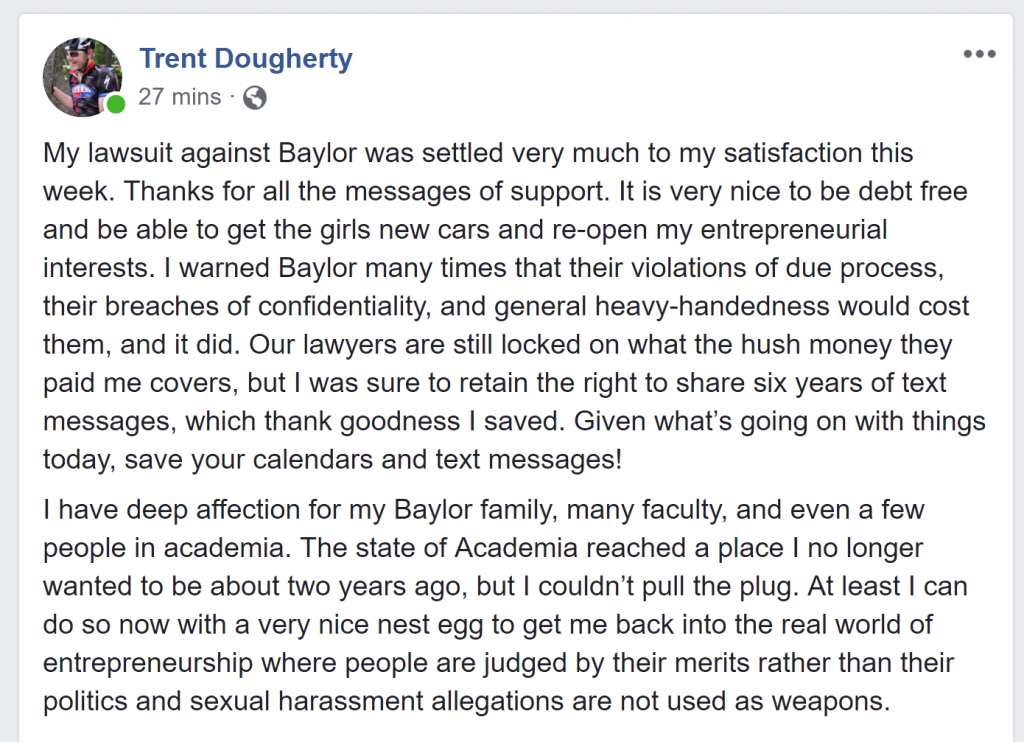 He has deleted several comments from the post that either object to or ask pointed questions about his remarks, or link to news accounts about the investigation’s findings, such as:

I have not yet been able to confirm any of Dougherty’s claims about his lawsuit or its settlement [added: see Update 2 — it is being reported that there was no lawsuit]. In a conversation about this investigation this past summer, I asked Dougherty, “Do you think you’ve been treated fairly so far by the Title IX investigative process?” He replied: “For the most part yes, I mean for the most part it’s just here’s what somebody said what do you have to say, but there have Been a few things I’ve complained about.”

UPDATE 2 (8:13pm): Baylor denies Dougherty had filed any lawsuit against the school, according to an article in the Baylor Lariat, which also reports that the funds Dougherty received from the school were part of a severance agreement, and come to just over $30,000 (before taxes and attorney fees):

Baylor refuted some of Dougherty’s claims in a statement to the Lariat Friday evening, saying there was no lawsuit between the university and the professor.

An unnamed source with knowledge of the separation agreement said Dougherty is not eligible for rehire at Baylor, and he has relinquished his tenure as part of the agreement. The source also said Dougherty is receiving severance pay through Dec. 31 and the total amount he will get in the agreement is just over $30,000 before taxes and attorney fees.

That source added taking Dougherty through the typical tenure revocation process would have lasted many, many months, and the agreement was the most expedited way to get him off the Baylor campus.

UPDATE 3 (9:03pm): Another faculty member at Baylor confirms that the tenured philosophy faculty were planning to meet to vote on whether to initiate termination proceedings for Dougherty—a power departments have at Baylor—when they learned of his resignation. Dougherty has removed the aforementioned public Facebook post.

UPDATE 4 (9/30/18): Centexproud.com, a local Texas news site, has published a statement from Dougherty. It is full of misleading statements, outright lies, and laughable attempts to depict himself as a hero and holier-than-thou victim. (I have a screen shot of the statement here, just in case it disappears from its original home on the web.) I may be able to share more details about the Dougherty case later this week but for now, suffice it to say that the allegations for which he was found by Baylor to be responsible are very serious and are nowhere near captured by his admissions of being “not careful” and “not pure as the wind-driven snow.”

Comments are closed on this post but if you have relevant information, email it to me at [email protected]