The American Catholic Philosophical Association (ACPA) has issued a public statement defending the role of philosophy in higher education. It is a response to a perceived increase in threats to the existence of philosophy programs and presence of philosophy requirements in curricula at colleges and universities, especially Catholic ones.

While directed at administrators and faculty at Catholic institutions of higher education, and written (reasonably, given its aims) with some language and presuppositions non-Catholic philosophers might bristle at, the document contains a number of points that may be worth drawing attention to not just when one’s department or curriculum is in jeopardy, but proactively, to forestall such attacks.

You can read the statement here.

Of particular interest may be the ACPA’s recommendation of what a philosophy requirement for all undergraduates at a Catholic college of university should look like:

Does anyone know of schools which require four philosophy courses of all of their undergraduates?

(Thanks to Thomas Osborne and Chad Engelland for bringing this to my attention.) 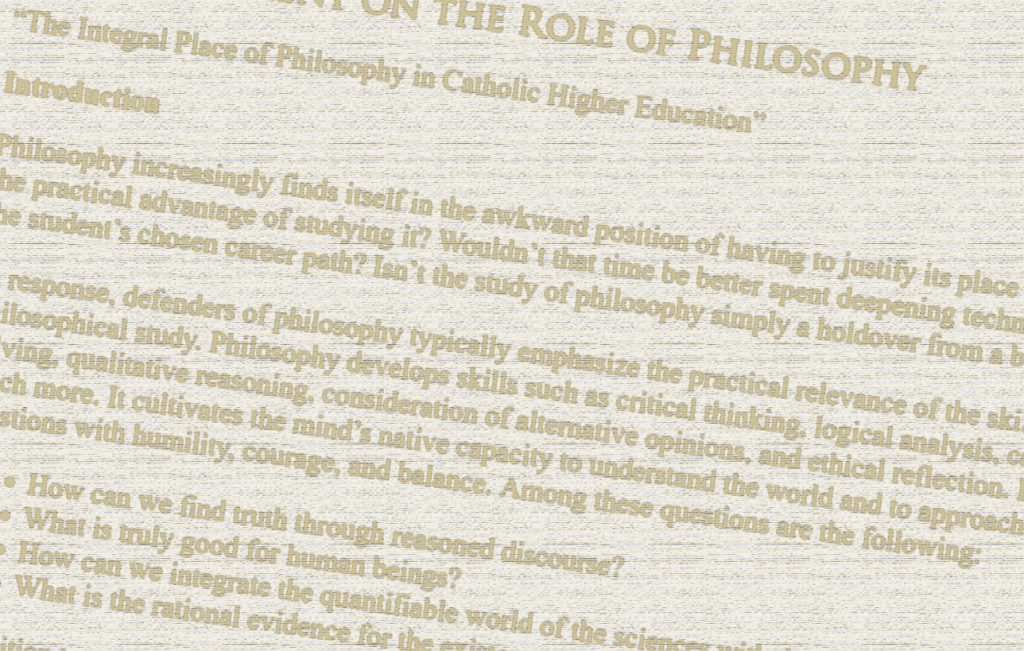 The latest threat to this historical commitment to philosophical education is the turn of core curricula to “skills” based requirements. In some cases, students no longer need to take, for example, a course in philosophy, taught by a philosopher, but rather a course in “ethics and justice,” which might be taught through the political science department, the sociology department, or the school of business. Thus, the current commitment to philosophy at Jesuit Colleges and Universities of one to four philosophy courses for all undergraduates is in some cases further diluted by instances in which some of those courses need not be genuinely philosophical.

So, yes, some colleges and universities do require philosophy for all undergraduates–namely, the Jesuit colleges and universities (Boston College, Fordham, Santa Clara, Loyola Marymount, etc.). Unfortunately, the philosophy requirements at even these schools–which have both historical and mission-based reasons to remain committed to philosophy–are increasingly under attack and likely to continue to erode.Report

I remember my years at Loyola U Chicago, and everyone was required to take 16 hours of philosophy, so technically graduated with a minor in philosophy. But those were the old days. I think LU now requires 9 hours, so only 3 courses, but I may be wrong and they require 12 hours, 4 courses.Report

I believe the University of Dallas still requires four philosophy courses for all undergraduates, three in a basic sequence and the fourth class relating to a student’s major. (This may have changed since I attended a few years ago.)Report

The Catholic University of America still seems to require four courses for all BA seeking students in the School of Arts and Sciences.