Kenny Pearce, a professor of philosophy at Trinity College Dublin, has been working with his university’s library to produce a digitized version of Berkeley’s handwritten introduction to his Treatise Concerning the Principles of Human Knowledge, which differs in significant ways from versions that have been published. 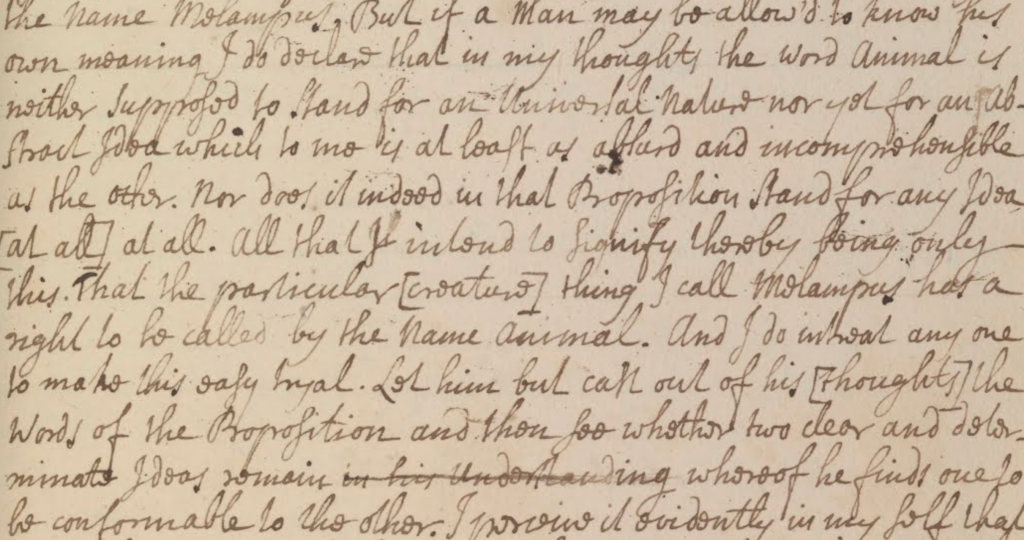 I asked Professor Pearce to share some information about the manuscript. He writes:
The Chapman Manuscript was donated to the library of Trinity College Dublin by J. B. Chapman in 1858. It contains a draft of the Introduction to Berkeley’s Treatise Concerning the Principles of Human Knowledge, in Berkeley’s own handwriting. This text is usually known as Berkeley’s ‘Manuscript Introduction’ or (in the Luce and Jessop edition) ‘First Draft Introduction’. It is significantly longer than the published Introduction and, as well as supplementing our understanding of Berkeley’s famous critique of abstract ideas, is one of Berkeley’s most detailed treatments of the philosophy of language. Unfortunately, the edition of this text provided by Luce and Jessop is woefully inadequate since it does not indicate Berkeley’s numerous markings, deletions, and insertions, and Belfrage’s diplomatic edition is not widely available. The manuscript has recently been digitized and I am currently working with the TCD library to make the complete set of high resolution images available in a form useful to scholars. In the meantime, I have received permission to make a (medium resolution) PDF of the complete manuscript available for download on my own web-site. Additionally, the library has supported this digital exhibition through Google Arts and Culture to highlight some of the most interesting portions of the manuscript and the story behind it.
Check out the beautifully crafted online preview of the work.
(I asked how that preview was put together, and it appears to be done via a widely available and rather accessible platform. Says Professor Pearce, “Google Arts and Culture is a platform for libraries, museums, and other similar institutions to showcase their holdings in digital form. Constructing the exhibition requires an institutional account, and is done through a very simple web-based interface. The interface supports a variety of media formats, as well as integration with Google Maps and Street View. You will notice in the exhibition that it is possible to pan and zoom within the high resolution images of the selected pages of the manuscript. All of this is handled automatically by the Google software.”)
Login
0 Comments
Inline Feedbacks
View all comments
Paid Advertisements