Non-tenure-track faculty at Loyola University Chicago went on strike this morning, after two years of negotiations between between their union (Service Employees International Union Local 73 Branch, which they joined in 2016) and the university’s administration.

The two sides last met for negotiations in a marathon session Monday. Representatives for the union and the university said there has been significant progress in recent weeks but ultimately an agreement could not be brokered before the deadline. 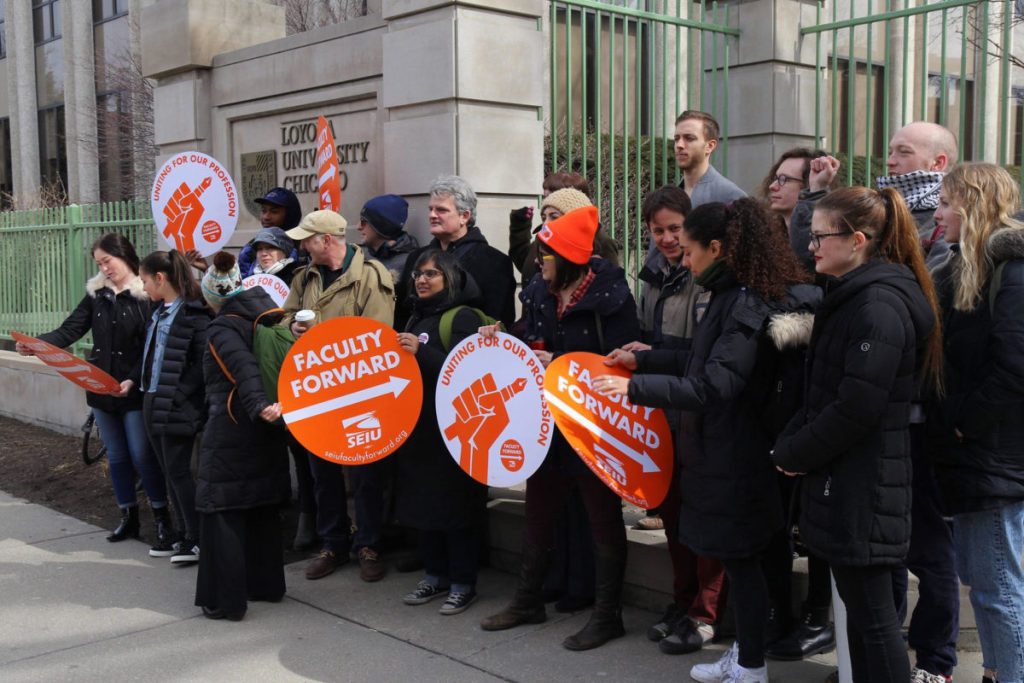 Rebecca Scott, an instructor at Loyola who earned her PhD there, is one of several philosophers who have been involved in the negotiations. She writes:

We came very close to reaching a deal, having come to an agreement on compensation and a number of other issues. But at the last minute the administration inserted a management rights clause that we felt undermined the contract as a whole. Other sticking points include the lack of a path to permanent employment for adjuncts and NTTs with one year contracts, and an attempt by the administration to weaken the union by not allowing dues to be deducted directly from unionized faculty pay checks.

Picketing began this morning and there is a campus rally planned for noon, according to the Tribune, which spoke with some of the faculty:

Alyson Paige Warren, an adjunct instructor in the English department, said Loyola’s bargaining team showed little urgency to work out a contract agreement until the union announced a potential strike date in February. Since then the two sides have met four times. “We would have loved to have gotten this done quietly and we would have loved if we could have gotten this done in under two years,” Warren said. “But we can no longer afford to wait, we can no longer afford to be patient.”…

Warren said adjuncts at Loyola are paid between $4,000 and $4,500 per course and it is common for such instructors to have appointments at other universities or other jobs to make ends meet. Adjunct instructors are employed by contract on a semester-to-semester basis, making it impossible to plan for long-term work and income.

“Last year we didn’t find out until May whether our appointments would be renewed,” said Sarita Heer, who teaches art history. “By May, jobs are already gone.”

As a grad student TA and adjunct back in the 70’s and 80’s at LU, I was treated very well, even to the point of getting “tenured adjunct” with benefits. Nothing like anywhere else in the Chi area. I always felt I was treated fairly.

But I don’t know how LU lines up pay-wise with other places now, only that adjuncts are paid about half, if that, of 4500 at the school I retired from here in Michigan and local state universities.

But, I am behind the non-tenure track folks and adjuncts, all of whom are underpaid and exploited (especially adjuncts and part-timers). Just trying to put perspective here.Report

Louis F. Cooper on Recent Commentary from Philosophers on Abortion and the Supreme Court

I have a slightly pedantic comment on Alito's leaked draft opinion (which I've read parts of). Lots of more basic criticisms of it are, I'm […]

I mean you could have this view, but it's a very bad view; personhood has to depend on *some* actual capacities. If not, then […]

Rutgers will not require the GRE for 2023 Philosophy PhD admissions. GRE scores can still be submitted.

People might find this paper of interest. "If fetuses are persons, abortion is a public health crisis" https://onlinelibrary.wiley.com/doi/10.1111/bioe.12874

I agree that no one set of narrow guidelines can solve all the problems. But these guidelines pertain to hiring and tenure/promotion decisions in particular, […]

Only some is related to American abortion politics specifically, but I have a fairly comprehensive presentation of the arguments and data from the pro-life side

Chatter, The Voice in Our Head, Why It Matters and How to Harness It by Ethan Cross.

I would argue that continuing the hiring processes as they are now would advocate for a pro-white/non-diverse hiring bias. The empirical data (e.g. https://www.journals.uchicago.edu/doi/10.1086/718075# or […]