Logician Saharon Shelah has won the 2018 Rolf Schock Prize for Logic and Philosophy.

Professor Shelah, who holds the Robinson Chair for Mathematical Logic at Hebrew University (as well as a long term appointment as Distinguished Visiting Professor at Rutgers University), is known for his work in mathematical logic, model theory, and set theory.

He was awarded the prize “for his outstanding contributions to mathematical logic, in particular to model theory, in which his classification of theories in terms of so-called stability properties has fundamentally transformed the field of research of this discipline.”

Saharon Shelah has made fundamental contributions to mathematical logic, particularly in model theory and set theory. In model theory, Shelah developed classification theory, concerning the classification of first-order theories in terms of properties of their classes of models. The classes of models of so-called stable theories have structural properties that can be characterised in geometrical terms, while the class of models of an “unstable” theory lacks structure. Most of contemporary research in model theory builds on Shelah’s work. Shelah has also made decisive contributions to set theory, including the development of a new variety of the forcing method and remarkable results in cardinal arithmetic, and he has solved deep problems in other areas, such as algebra, algebraic geometry, topology, combinatorics, computer science, and social choice theory.  Shelah has had, and still has, an indisputable and exceptional position in mathematical logic, particularly in model theory. He is almost unbelievably productive, with seven books and more than 1100 articles to date.

The Schock Prize is 400,000 Swedish Krona (roughly $49,000) and is awarded by the Royal Swedish Academy of Sciences. The prize is named for Dr. Rolf Schock, who died in 1986, and whose will set out that a portion of his estate be used to fund four prizes in the fields of logic and philosophy, mathematics, the visual arts and music. 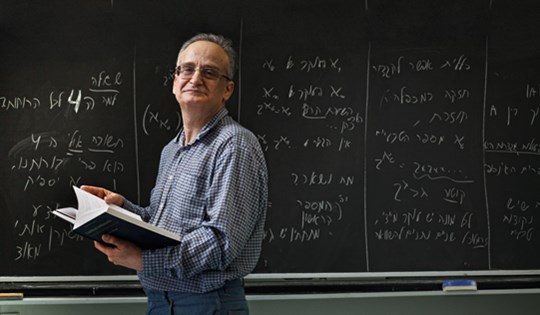 Shelah has a dual affiliation: Rutgers University and Hebrew University.Report