How many undergraduates who major in philosophy also major in another subject? In the following guest post* , Eric Schwitzgebel (Riverside) looks at the numbers and what they mean.

(A version of this post first appeared at The Splintered Mind.) 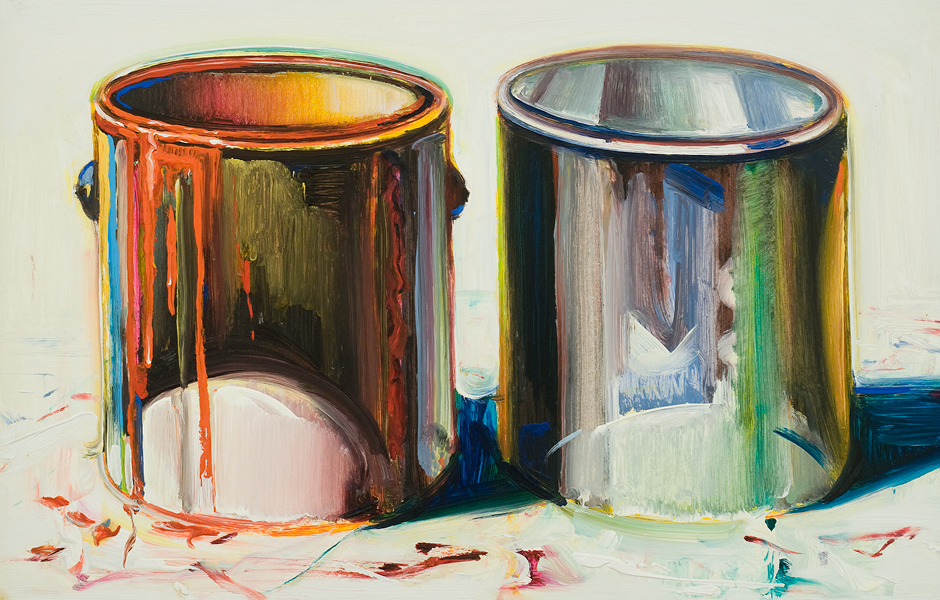 Following a suggestion by Eric Winsberg, I decided to look at the IPEDS database from the National Center for Education Statistics to see how commonly Philosophy is chosen as a second major, compared to as a first major, among Bachelor’s degree recipients in the United States.

I examined data from all U.S. institutions in the database, over the three most recent available academic years (2013-2014, 2014-2015, and 2015-2016), sorting completed majors by the IPEDS top-level major categories (2010 CIP two-digit classification), except replacing 38 “Philosophy and Religious Studies” with 38.01 “Philosophy”. Separately I downloaded the grand totals of completed first and second majors across the U.S.

Across all 37 top-level categories of major (excluding from analysis the top-level category Philosophy & Religious Studies), only two had a higher percentage of students completing the major as a second major: Foreign Languages, Literatures, and Linguistics (28.5%), and Area, Ethnic, Cultural, Gender and Group Studies (26.2%). Let’s call this the Second Major Percentage. In this respect, Philosophy is quite different from two of the other big humanities majors with which Philosophy is often compared: English Language and Literature (7.2%) and History (9.3%). Interestingly, Mathematics, which is often regarded as a very different type of major, ranks fourth, with a Second Major Percentage of 14.4%.

Here’s a breakdown among all top-level majors with at least 10,000 completed degrees in the three-year period: 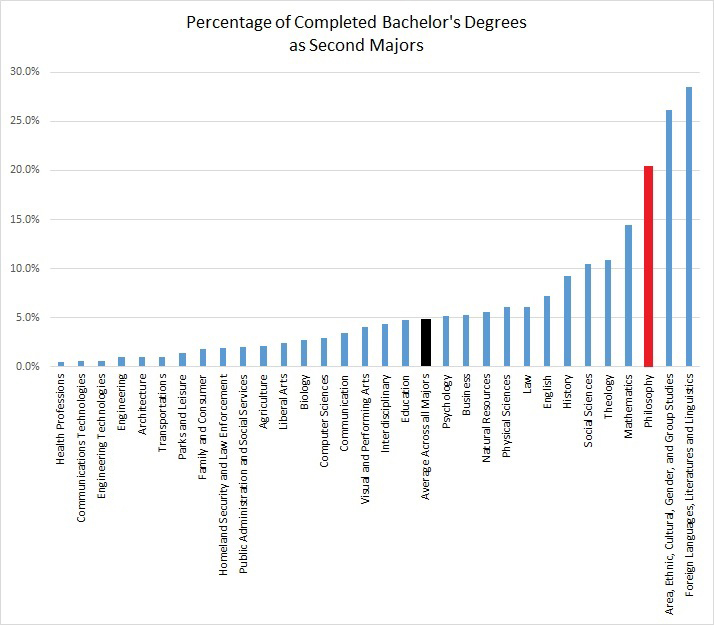 Last fall, I presented data showing the precipitous decline in Philosophy majors in the past few years — from 0.58% of all graduates to 0.39% of all graduates. One hypothesis, which I thought worth considering, is that Philosophy tends disproportionately to rely on double majors, and it is increasingly difficult for students to earn a second major. However, I now think that a decline in second majors can’t be the primary explanation for the decline of the Philosophy major. First, although the percentage of students earning a second major has declined somewhat in the period — from 5.4% in 2009-2010 to 5.1% in 2015-2016 — that is small compared to the magnitude of the decline in Philosophy, where completions are down by 19% in absolute numbers and about a third in relative percentages. Second, we saw similar declines in English and History, and those disciplines don’t appear to be as reliant on students’ declaring a second major.

To further explore the question, I divided the colleges and universities into two categories: those with a high rate of double majoring (>= 10% of graduating students have two majors) vs those with a low-to-medium rate of double majoring (< 10%), excluding institutions with < 300 Bachelor’s degree recipients over the three-year period. As expected, at institutions where students commonly complete second majors, about three times as high a percentage of students completed Philosophy degrees than at institutions where students less commonly complete second majors: 9240/935419 (1.0%) vs. 14876/4656563 (0.3%; p << .001).

Direction of causation is of course hard to know. These groups of institutions will differ in many other respects too, and that is very likely to be part of the causal story, maybe most of the causal story. And yet, the following fact is suggestive: The four majors that differ most in percentage between the two groups of universities, as measured by the ratio of percentage of students completing the major at the high-double-major schools to the percentage completing the major at the low-double major schools, those are exactly the same four majors that have the highest rate of second majors in the overall dataset.

That’s a little abstractly put, so let me give you the breakdown for the highest-ratio majors, so you can see where this is coming from:

I need a good name for this ratio, but I can’t think of one, so let’s just call it The Ratio. Of course, the median Ratio is about 1.0. History and English both have Ratios of 1.9, which is substantially above 1.0, but not as high as these other four.

With a few exceptions, most notably Biology (a Second Major Percentage of only 2.7%, but a Ratio of 1.7), the relationship is reasonably tidy. The correlation between the natural log of each major’s Ratio with each major’s Second Major Percentage is r = .76 (p < .001; excluding majors with < 1000 completions in either group of universities; natural log to improve spread near zero). Here it is as a scatterplot: 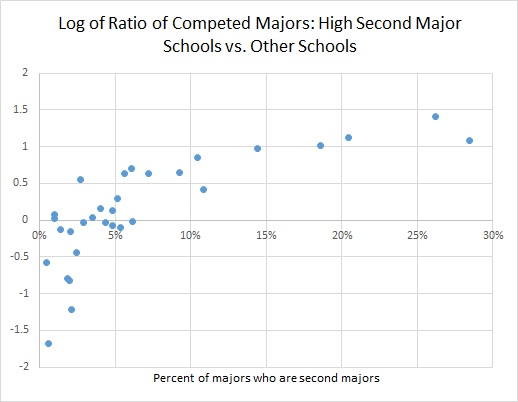 So although it seems unlikely that the recent sharp decline in Philosophy majors is due primarily to a decline in the overall proportion of students declaring two majors, it remains plausible that conditions that are good for double-majoring in general may be good for the Philosophy major in particular.

I don’t follow the remark about 40% in the first bit of boldface text. Could someone explain what is meant?Report

That’s how I read it anyway.Report

Yes, Derek, that’s how I was thinking. Apologies for not finding a clearer way to express it in the original post.Report

As an undergraduate in South Africa, I was required to have two majors for my (three-year) BA (I did Philosophy and History), although for my Honours degree (in my fourth year), I just took Philosophy. I’d like to think that the training in another discipline has helped me not only generally, but also in how I approach philosophy (political philosophy especially).

I don’t suppose there is much likelihood of this happening, but I often think it would be valuable for US institutions to require either a double major or a major/minor combination (which I suppose would be the rough equivalent of what I did). It would likely be good for Philosophy in particular, but might also contribute to students thinking outside the box in whatever discipline they major in, and to interdisciplinarity more generally. I haven’t looked at any research on the matter though, so this is very much armchair speculation.Report

My undergraduate experience (in the US) leads me to agree, though 100% of the philosophy majors where I was had a second major. One started in philosophy and added humanities. The other two of us found philosophy from history and math. The different approaches were pretty evident.

The AskPhilosophyFAQ on reddit suggests everyone interested in doing philosophy put some serious time into doing something else. I could see that applying generally. I suppose for purely being a technician a narrow focus helps, but more deeply exploring the wheelhouses of two fields allows for some nice cross-pollination.Report

I wonder how much of this is a result of philosophy frequently being a “discovery” major. I imagine most students who are two or three years into completing a major are likely to finish it rather than abandon it.Report

I think Nichole is right. Many universities practically force incoming freshmen to pick a major on day one, when they have had no exposure to academic philosophy. So even if they discover philosophy freshmen year in their intro class, it will already be their second major.Report

At my institution, incoming students have to pick a major. Almost no one picks philosophy as a first major, but a lot add it as a second major. Often in internal accounting, we have to do quite a lot of work to figure out how many majors we have — it’s easy to search for first majors but finding our second majors is much harder. As this in our case affects access to certain scholarship allotments, I mention it because it may be helpful to others — don’t undercount your majors!Report