Women Have Been Earning 30-34% of Philosophy BAs in the U.S. Since Approximately Forever*
by Eric Schwitzgebel

The National Center for Education Statistics has data on the gender of virtually all Bachelor’s degree recipients in the U.S. back into the 1980s, publicly available through the IPEDS database. For Philosophy, the earliest available data cover the 1986-1987 academic year. [For methodological details, see note 1].

The percentage of Philosophy Bachelor’s degrees awarded to women has been remarkably constant over time — a pattern not characteristic of other majors, many of which have shown at least a modest increase in the percentage of women since 1987. In the 1986-1987 academic year, women received 33.6% of Philosophy BAs. In the most recent available year (preliminary data), 2015-2016, is was 33.7%. Throughout the period, the percentage never strays from the band between 29.9% and 33.7%.

I have plotted the trends in the graph below, with Philosophy as the fat red line, including a few other disciplines for comparison: English, History, Psychology, the Biological Sciences, and the Physical Sciences. The fat black line represents all Bachelor’s degrees awarded. 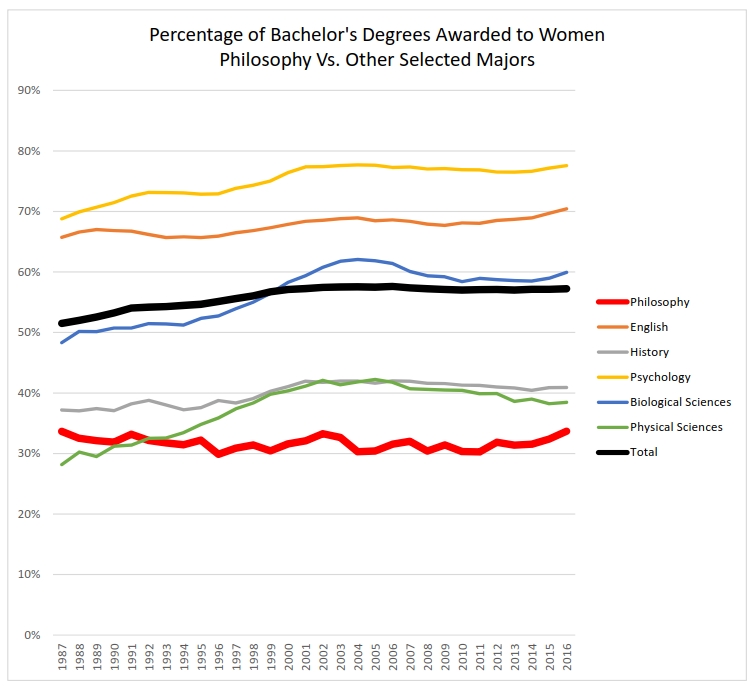 Philosophy is the lowest of these, unsurprisingly to those of us who have followed gender issues in the discipline. (It is not the lowest overall, however: Some of the physical science and engineering majors are as low or lower.) To me, more striking and newsworthy is the flatness of the line.

Women were a slightly lower percentage of Philosophy BA recipients in the research universities than in the teaching-focused colleges (30% vs. 35%; and yes, p < .001). However, the trends over time were still approximately flat: 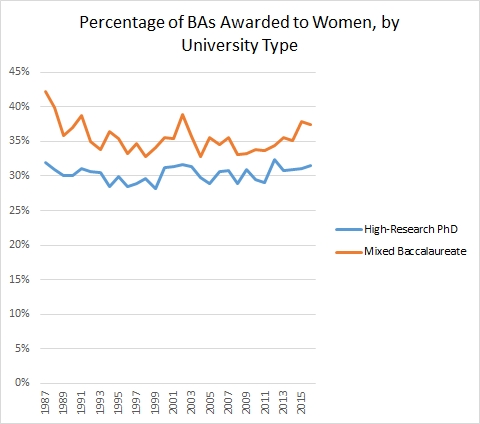 For kicks, I thought I’d also check if my home state of California was any different — since we’ll be seceding from the rest of the U.S. soon (JK!). Nope. Again, a flat line, with women overall 33% of graduating BAs in Philosophy.

Presumably, if we went back to the 1960s or 1970s, a higher percentage of philosophy majors would be men. But whatever cultural changes there have been in U.S. society in general and in the discipline of philosophy in particular in the past 30 years haven’t moved the dial much on the gender ratio of the philosophy major.

[Thanks to Mike Williams at NCES for help in figuring out how to use the database.]

Note 1: I looked at all U.S. institutions in the IPEDS database, and I included both first and second majors. Before the 2000-2001 academic year, only first major is recorded. I used the major classification 38.01 specifically for Philosophy, excluding 38.00, 38.02, and 38.99. Only people who complete the degree are included in the data. Although gender data are available back to 1980, Philosophy and Religious Studies majors are merged from 1980-1986.

Well one thing we should look at is in what fields women are disproportionately represented. I think, for instance, women are something like 75% of psychology majors. Should the goal then be to have some current psychology majors switch to philosophy majors? If so then why? Every woman who becomes a philosophy major is one who is no longer a major in another field. Perhaps we should want to take women away from these other fields, but I think a discussion of why is in order. After all, it seems a bit presumptuous to think we know what these women should major in better than they do themselves.Report

Where in the article is it even suggested what anybody ought to major in?Report

Or perhaps we should discourage men from choosing to major in philosophy.Report

The most striking thing about that chart is that not a single one of the majors shown has an approximately equal representation of both genders. Philosophy isn’t even an outlier—out of the six, both English and History have a more skewed gender ratio.Report

Sorry, that should say “English and psychology.”Report

If I read the thick black line in the first chart correctly, the proportion of women earning BA degrees has overall risen in the ~30-year period. But over the same period there’s a stagnancy of women earning BAs in philosophy. Doesn’t this mean that the average woman graduating college in ’87 was more likely to major in philosophy than the average woman graduating college in ’15? Note how, for all the other majors, there was a commensurate rise in the proportion of women majors over the same period.

So unlike other disciplines, philosophy actually became *less* appealing over time as a major to the average woman earning a BA. This suggests regression, rather than stagnancy.Report

By my interpretation of graph you’re correct that amongst women who earn BAs the percentage that ear philosophy BAs has fallen. However, while in a certain sense it is correct to say that that means philosophy has become less appealing to the average woman earning a BA, I think it is misleading, because what constitutes “the average woman who earns a BA” has changed. It may simply be, for example, that more women with an interest in English, Pscyhology, and the biological and physical Sciences are getting BAs. So it isn’t that for a woman considering getting a B.A. in some subject philosophy has become less appealing – it’s that getting a B.A. in one of these other subjects has become *more* appealing, while the appeal of philosophy remains constant.

But we need to also take into account the number of possible major choices has risen substantially. Or at least, I know it has at my institution and I would be surprised if this wasn’t a general trend.Report

I don’t have BA figures but I know that between 1949 and 1994 18% of PhDs in Philosophy went to women and since then the percentage has bounced around 27-28%, that is, it too has flatlined. I’m mentioning this since all of Eric BA data comes after the kind of push to include more women in the profession, things like affirmative action, advertised jobs, things like that. There is a kind of resistance to gender equity pressure in philosophy and it improbably not surprising that throughout the period on which Eric reports there has been virtually no change in the kind of teaching materials available to introductory students with respect to gender balance nor much of an increased likelihood that students will be taught by women professors. Another thing on the other hand that has remained steady throughout this period is the number of male philosophers who explain that they are disadvantaged and women have it made.Report

Yes, I wish I could have got data back through at least the 1970s, when a lot of the change appears to have happened.Report

Two questions for Eric — how does the fact that the numbers of double majors has increased affect how we should interpret these figures. I can’t figure out whether you are counting majors, or students.

And, do you have any data on what proportion of philosophy credits are taken by women? Why should we care more about majors than credits? (that’s not a rhetorical question, its just one I don’t know how to answer and want to hear what others say)

Completely anecdotal but: Parents still pay more attention to their daughters’ academic interests and, in my experience, the parents of smart and capable young women push them toward what they see as ‘useful’ majors.(which sort of includes English, maybe because they have all known English teachers?). Parents are smart to do this — their daughters are more likely to achieve a lot than their sons, and more likely to be attentive to them in older age. But, we need to sell philosophy as useful.

Equipping new professors with the skills to manage classrooms in such a way that ensures that the women talk as much as the men, and the blowhards talk less than those with something to say, would be helpful in numerous ways. But that’s what they are, learned skills. I agree with Margaret that curriculum matters. But instruction matters at least as much, and we don’t talk about it anywhere near as much..Report

Eric Schwitzgebel
Reply to  harry b

Hi, Harry — thanks for the questions. It by major back to 2001 so that double majors are double counted. Before that, it is only primary major. Taking out second majors in the more recent data doesn’t make a big difference. On total enrollments by major, no I don’t have access to any such data. I wish I did!Report